The 2013 Anti-Police Brutality March Ended Badly—Again. Here’s a Look at How We Got Here.

“This is the street, this is the sidewalk,” explained the tall, black-clad man at the front of the room, while drawing a diagram on the chalkboard.

“The crowd is walking down here, and the police will have a platoon-y formation over here,” he said, taking a couple steps to his left. “And maybe another one, over here.”

This formation is what the man called “a bad situation.”

In addition to prepping the audience with a series of advisable running patterns, in the case of a riot police-line charge, the workshop included a lesson in items that should be brought to a major demonstration—including a bandana dunked in apple cider vinegar for pepper spray, granola bars, and a lawyer’s phone number in case of arrest.

The advice then extended to items best left at home, such as any illegal substances, identifiable clothing and valuables.

This workshop was called in preparation for the Anti-Police Brutality March, set for later that evening.

The March 15 demonstration, coinciding annually with the International Day Against Police Brutality, has only ever been completely peaceful twice in Montreal since its inauguration 17 years ago, according to police spokesperson Ian Lafrenière.

Two years ago, more than 300 people were arrested at the march, and last year saw another 200 demonstrators end up in plastic zip-tie handcuffs.

Not surprisingly, 2013’s demonstration didn’t stray from the pattern—with over 200 participants detained, roughly 150 ticketed, and 12 arrested for criminal acts.

Especially in recent years, the event has garnered a reputation for being a media-drenched, vivid display of the exact type of violence it aims to denounce.

Police brutality is not a novelty in Montreal, nor are major demonstrations in its downtown core. Such happenings have become strangely normal here.

But while there is no specific “Day One” that the history of police brutality in the city can be attributed to, there are several moments that have been pivotal in shaping the reality of today’s police-protester climate.

Creation of a Coalition

In April 1995, Human Life International, a pro-life religious organization, came to Montreal for a conference.

The event was greeted by a large-scale demonstration in opposition to it, with participants gathering outside the Notre-Dame Basilica, where HLI members were set to begin a candlelight walk.

Both undercover and riot police were called in to monitor the protest—a presence that was, at the time, much less common than it is today.

The rally of several thousand people came and went relatively peacefully—albeit noisily—recalled Alexandre Popovic, a demonstrator at the time.

He remembers, however, that when things eventually dwindled down to the last of the demonstrators, violence erupted between them and the police.

Popovic said he attempted to help a fellow demonstrator from being unjustifiably beaten by a police officer, and in doing so was beaten himself. Later, he became so angry that he kicked a nearby police car.

An undercover officer later arrested him.

That day, at the police station, Popovic met fellow arrestee, Yves Manseau—and the two began discussing the need for collective action against the problem of police violence at the event.

From there, an organization was born to contest arrests made at the demonstration, but it wasn’t long before the group evolved to extend its scope beyond cases exclusive to the HLI protest.

“After two or three months, people found that we had an interest in other cases, in terms of shootings and police abuse in Montreal, corruption,” recalled Popovic.

“There was no organization that had a specific task or mission to respond to those police abuse cases. We found that there was need for that sort of organization.”

Later that summer, the Collective Opposed to Police Brutality was born. According to their website, the organization now aims “not only to denounce the harassment, violence, intimidation, arrests and abuse of power by police, but to inform people of their rights and lend support to victims.”

Today, the COPB remains the primary organizer of the annual Anti-Police Brutality March in Montreal.

Since last Friday’s demonstration, the organization has put out a call to victims who were, “detained, kettled,”—referring to the police tactic of surrounding large crowds and holding them in place for hours at a time before arresting them—“brutalized or arrested” at the march.

They intend to organize a meeting to arrange a way to collectively contest tickets and arrests. 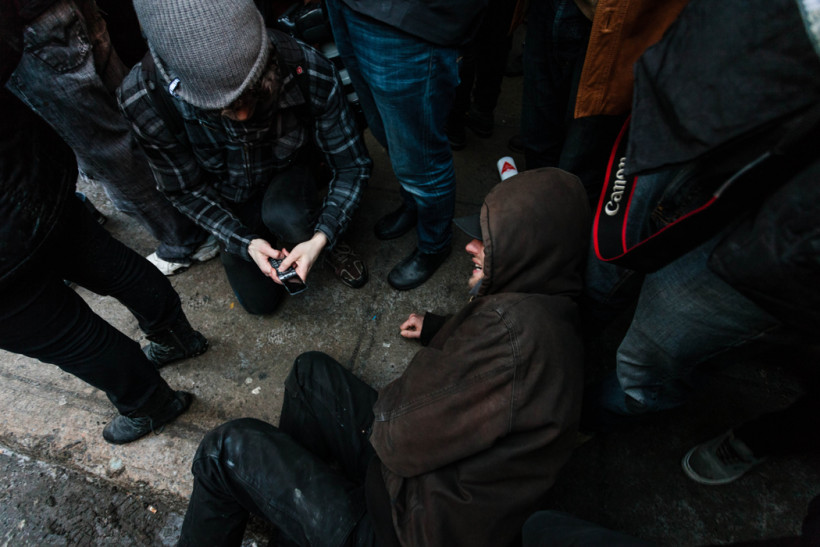 Inside a kettle at the 17th annual Anti-Police Bruatlity protest. Photo Alexandru Petrosan

Perhaps one of the most well-known cases of police brutality in recent history has been that of Fredy Villanueva.

In August 2008, Villanueva, an unarmed 18-year-old, was shot and killed in broad daylight by a police officer in Montreal North.

His death triggered a riot, many subsequent vigils and has since garnered much attention from the media, as controversy continues to surround the process in which the case is being looked into.

Quebec Public security department policy states that it is the responsibility of a separate police force to conduct the investigation in the case of death or injury at the hands of an officer.

The two officers involved in the Villanueva shooting were not interrogated until days after it happened.

Now, four years later, the coroner’s inquest has yet to be completed or made public.

Following the shooting, it was reported in The Gazette that Ontario’s ombudsman had “zero faith” in the Sûreté du Québec to investigate the case impartially, while the then-public security minister of Quebec, Jacques Dupuis, reportedly had “full confidence” in the force’s ability to do so.

After Villanueva’s death, the Coalition contre la répression et les abus policiers was formed to ensure that debate surrounding issues of police brutality and impunity remain in the public eye, and continue to be acted upon.

“Politicians need to be pushed by public outrage to do reform,” said Alexandre Popovic, CRAP’s spokesperson. “[Villanueva’s] case has had a very big influence on putting back the public debate on police investigating police.”

Popovic, who is no longer involved with the COPB, said that while the CRAP is fighting for a cause similar to the COPB, their approach is different.

The CRAP opts not to associate with, or participate in the annual March 15 demonstrations. In lieu of taking to the streets, the organization attempts to address issues of police brutality by attending public discussion on forums—such as those held last week concerning Bill 12.

When passed as law, this bill would see the creation of the Bureau d’enquêtes indépendantes, a civilian body whose duty would be to oversee and review deaths and injuries at the hands of police.

This body would include civilian investigators, appointed to serve for five years, and would be led by retired judges or lawyers, a director and deputy director selected upon recommendation of the province’s ombudsperson, justice minister and a lawyer.

On March 12, Quebec ombudsperson Raymonde Saint-Germain officially endorsed the bill, saying that the proposed legislation “strikes a balance between the public interest and respect of the rights of all the ones involved.”

At the hearings, the sole opposition came on behalf of certain police union representatives.

In response to the near-nightly demonstrations, the provincial government amped up its legislation, tightening its reigns on the public’s right to protest.

On May 18, 2012, the National Assembly of Quebec passed Bill 78, which required any organized demonstration of 50 or more people to submit, with eight hours notice, the date, time, location and route of the planned demonstration.

The bill, which later became Law 12, stated that failing to do so stands to result in fines or court action.

The legislation further states that if an association or federation takes part in the demonstration, it will be considered the party responsible, and can be fined accordingly.

Bill 78 was repealed by the Parti Quebecois last october.

Furthermore, the City of Montreal modified its municipal P-6 bylaw to include clauses that make it illegal to demonstrate with one’s face covered and without identifying one’s route. The modified bylaw also increases the previous fine for violating such regulations from $100 to $500.

This Friday, The Gazette reported that least 150 people left Friday’s protest with a $637 fine, as a result of their participation in a demonstration that was declared to be illegal.

Perhaps with some of that in mind, demonstrators, civilians and police officers greeted March 15 this year somewhat differently.

In a press conference held March 14, police spokesperson Lafrenière said the Service de police de la Ville de Montréal was “hoping for the best, but getting ready for the worst.”

Police teams were brought in from Toronto, Peel, Ottawa, Gâtineau, London and Longueuil to observe the SPVM’s now-honed techniques and strategy of controlling large-scale demonstrations.

The SQ, and officers from Laval were brought in to help.

When it came time for the protest—announced to commence at 5:00 p.m., it appeared that police tried to shut things down before they could even start.

The demonstration was declared illegal almost immediately under bylaw P-6, due to its failure to submit a route.

As several hundred demonstrators gathered at the corner of Ontario St. and St. Urbain St., just north of the SPVM headquarters, the police moved in, blocking all exits.

The first arrest was made before the rally had even officially begun, and additional preemptive arrests were made while demonstrators were still gathering.

Eventually, the police opened up one side of St. Urbain St., and the crowd moved south.

Before the protesters had traveled one block, the SPVM made their move, splitting the crowd in half down the center by charging down an adjacent sidewalk.

At the same time, garage doors on St. Urbain St. were thrown open as SQ officers in full riot gear poured out, splintering the crowd even further.

Once things got going, they weren’t able to go far. Different pockets of protesters throughout downtown were kettled, preventing the hundreds of protesters from ever regrouping.

The police used pepper spray and deployed rounds of sound grenades and tear gas as means of crowd-control. The fractured demonstration continued for almost three hours.

According to The Gazette, at least six people were injured—including two police officers.

A police car was vandalized and two windows were smashed.
The demonstration came to a close with slightly more arrests than last year, though notably less property damage, by comparison.

Update: The Link originally reported Bill 72 was set to expire and that Quebec law states that it is the responsibility of a separate police force to conduct the investigation in the case of death or injury at the hands of an officer. Bill 72 was in fact abolished by the Parti Quebecois, and it is not a law, but a policy of Quebec’s Public security department. Yves Manseau’s name was also originally misspelled. The Link regrets the error.