In the mid-afternoon in Mile-Ex, the warehouse-turned-studio space boomed with electronic music. Guests shuffled in and out of the the Decade Building, buzzing with excitement.

In Montreal for one day only, Pin Patch Mtl hosted the third edition of the pins and patches sale on May 18. Ran by the creative faces behind the pin-and-patch collective Manière Noire, the expo brought over 40 artists and hosted over 900 attendees.

John, an attendee at the event, has been collecting pins for two years—they lined the outer edges of his jacket, adding color and flair.

“Take this leather jacket—I’m sure I’m not the only person that has one,” he said. “But [pins] turn it into your own. The idea is that you have that ultimate level of customization, something that somebody made by hand and that you just can’t buy out of a store. And that’s what I enjoy about it.”

Inside the space, people meandered under string lights, weaving their way through the crowd as the speakers pulsed with catchy techno beats. 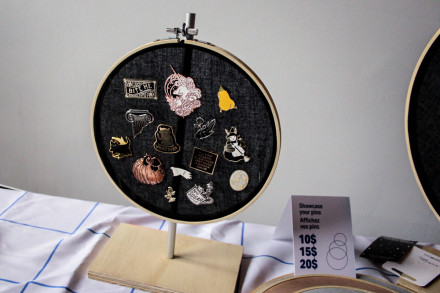 Artists are able to reach wider audiences beyond prints or original art by selling pins and patches.

“This would make a cute gift,” said one attendee, who stopped by GRRRL Spells station and looked at one of the black and silver pins on the table—a ouija planchette printed with the words they/them.

A combination of goth aesthetic and riot grrrl attitude, GRRRL Spells started off as an apparel line before designer En Tze decided to branch out into pins and patches.

“[GRRRL Spells] is basically horror and occult-inspired queer apparel and art,” Tze explained. Their wide array of pins and patches glistened under the fairy lights.

“[Pins and patches are] a way to express some things I like, some political opinions sometimes, and to express the specific aesthetic that I like,” said co-organizer Lizbeth Poirier of Manière Noire.

She started the collective about two years ago with her girlfriend Geneviève Lamarche Reid, who co-organized the event after noticing a lack of a certain aesthetic in her own pin collection.

“I wanted my art to travel.” — La Pimbêche

“For me, [collecting pins and patches] is sort of similar to getting tattoos of specific things,” said Poirier.

Glossy black and silver skulls and bats lined the table in a delicate style reminiscent of tattoos—lines thin and delicate against the pin’s enamel base. The collective works hand in hand with a tattoo artist who contributes to designs, which helps create their unique style.

Having gone to art school, Poirier worked for years in the tech industry before she started Manière Noire. The collective has allowed her to find her way back into the world of art making and join the wide network of creatives in the online and offline pin and patch worlds.

Pins and patches offer wearers a fun way to decorate themselves while creators are able to reach wider audiences beyond prints or original art.

“If we look at it from an artist point of view, it’s a really easy way to sell your art that is not expensive to produce, and for people to buy,” said Lamarche Reid.
“People who don’t necessarily have an interest in big prints or original art but still like your stuff can buy your products easily.”

The co-organizer wore a jean dress covered in various colored pins, small and bright. Lamarche Reid said that every time she wears this dress, she carefully chooses which pins she will put on it, depending on her mood.

For La Pimbêche, an illustrator who specializes primarily in feminist art that edges along the borders of humour and sincerity, this is especially true.

The name of the company itself is a reference to an old misogynist French insult, translating in English to ‘impertinent woman.’ The creator chose this name as a way to reclaim empowerment.

“I wanted my art to travel,” she explained. Her art is funny and insightful—a patch of two pink flamingos with the words ‘Let’s Flamingle’ hangs above a pin with Frida Kahlo’s face on it, ‘Fierce like Frida’ written beneath it.

“For me, a patch and a pin is a vehicle for my message to travel and start a conversation with other women, and men, and everyone. It’s not an art piece you have in your home and you’re the only one looking at it—you actually wear it,” said La Pimbêche. 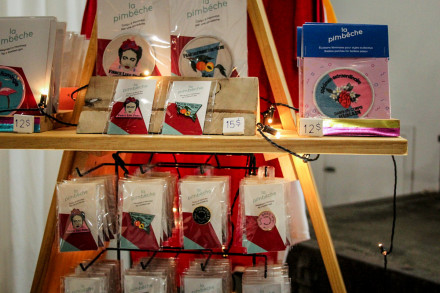 Pin Patch Mtl started in 2017 after the co-organizers at Manière Noire saw that there was one such event in Toronto, but none in Montreal. Photo Bree Rockbrand

Pin Patch Mtl started in 2017 after the co-organizers at Manière Noire saw that there was one such event in Toronto, but none in Montreal. They then booked a small space at Espace POP and opened their doors with only 10 vendors. To their surprise, over 400 people showed up.

This year, Pin Patch Mtl produced their biggest exposition yet. Vendors came from all around the country to sell their products and mingle with other pin and patch lovers.

“I live in a small town of about 500 people,” said Julie of Ramble On Supply Co. Her designs displayed a starry night sky, mountain landscapes, and other nature-inspired themes. “A lot of my business is through mail order through my website, so being able to go to Montreal or Toronto and do things like this is really cool.”

“There’s a few people who do enamel pins in Montreal, but it’s still not the most known medium,” explained Lamarche Reid.

Montreal’s pin and patch scene may be smaller than in other cities, but the competition between scenes is virtually non-existent. “It’s a bit hard to explain, but everyone is really supporting each other. We do trades with each other, so it’s really something that bonds people together.”

Check out Pin Patch Mtl’s website for a list of this year’s vendors and updates about next year’s edition.

A previous version of this article states that one co-organizer’s name is Elizabeth Poirier, it is, in fact, Lizbeth Poirier. This version also states that the collective was formed four years ago, when in fact, it was formed two years ago. The Link regrets these errors.