Photo Essay: Melinda Prévost and the Life of a Diabetic Athlete

It’s Nov. 18, and it is game day for the Concordia Stingers’ women’s hockey team. At the Ed Meagher Arena, on the ice rink, one of the players circles around the ice, warming up.

Her teammates surround half of the space of the rink, the opposing team takes the other half. Melinda Prévost, #19, is just as nervous about this game as her fellow Stingers. But she has to deal with more than what meets the eye. 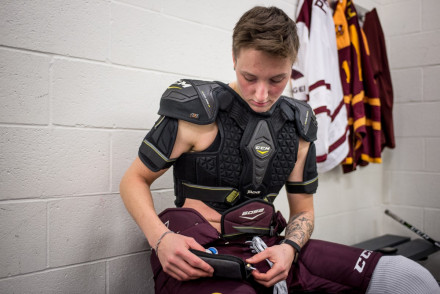 Prévost tests her blood after practice. As a diabetic athlete, she constantly monitors her blood sugar levels before and after every game and practice. Photo Sarah Boumedda

Prévost is in her last year at Concordia University, completing a degree in exercise science with a focus on clinical exercise physiology. She’s also a forward on the Stingers’ women hockey team, and has competed with Les Canadiennes de Montréal. Prévost is also diabetic—and has been dealing with the disease since age 11.

“I had normal symptoms of hyperglycaemia,” she said about her childhood. “I was dehydrated [and] starving. I was out of energy, and I was losing a lot of weight, too.”
Her parents were at a loss, there were no antecedents of the illness in the family prior to her case. After a trip to the Montreal Children’s Hospital and a few blood tests, the results were conclusive. Prévost was diagnosed with type 1 diabetes. Unlike type 2, this condition has autoimmune roots, and therefore will last a patient’s entire lifetime. 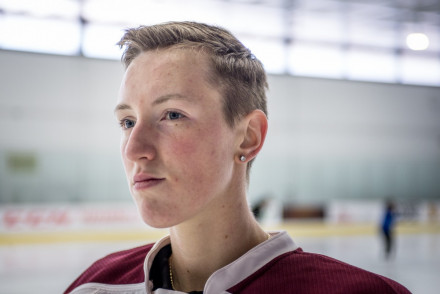 Prévost has two goals on the season so far. Photo Sarah Boumedda

For Prévost, like many others, the disease simply became a part of her life. “It was obviously a change, but it is what it is, and it’s normal to me now,” she explained. Then, she added with a shrug, “It doesn’t stop me from doing anything. I just have to be a bit more careful than normal people out there.”

That doesn’t mean it doesn’t get difficult. Juggling school, hockey, and work while being diabetic can be a challenge at times. “Sometimes, it’s definitely a roller-coaster. There’s a lot of things that affect blood sugar, exercise being one of them, food, and stress, especially when it comes to exams.”

With so many things coming into play, Prévost has to test her blood sugar often. She keeps her testing tools on her at all times, and even has an easy-access patch on the side of her body that lets her test her blood sugar with the touch of a device without draining out a drop. Very practical, especially in between periods, during a fast-paced hockey game. 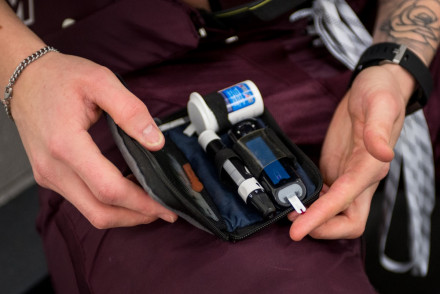 To keep track of her health, Prévost monitors her blood sugar levels through the test patch on her left arm and the insulin pump attached to her left side. Photo Sarah Boumedda

Dealing with diabetes alone is no easy feat, and having a supportive entourage greatly helps, Melinda shared. Her teammates, for instance, have been understanding from the start. “They ask questions, here and there, but they don’t judge me about it, obviously.”

“The coaches are really good,” she added. “They’ll get me a different meal than the team, if they’re having like pizza or pasta, you know. They’ll get me something with more proteins, and stuff, after the game, especially.”
Of all the people around her, however, the person she gets most support from is her girlfriend Katerina Syragakis, who’s also studying exercise science at Concordia. “She’s obviously my biggest support system. She’ll help me a lot with it, and try to figure it out.” 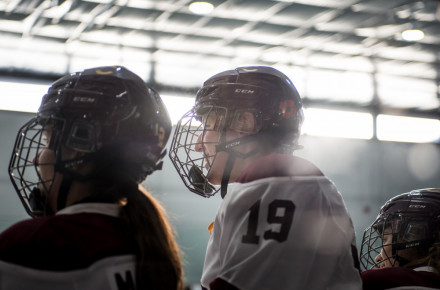 Prévost cheers on her teammates during the Stingers’ game against the University of Ottawa Gee-Gees. Photo Sarah Boumedda

“She sees when I get frustrated about it, ‘cause it’s obviously not a walk in the park.”

Prévost said her girlfriend’s desire to learn and help is what makes it easier for her, too. “She’s super interested in it, and wants to learn so I love that too. I’m not shy about it with her, she helps me, and she’s curious, so she’ll want to test my blood for me, and give me needles.” She paused to smile, and added, “No, it’s cool. She makes it easier for me.”

Now in her final year of studies, Prévost shared that her time at Concordia might be the last time she plays competitive hockey, a sport she’s played since she was seven years old. She said she wants to focus on her career, hoping to become a certified kinesiologist and help other people—especially those dealing with diabetes or other chronic, cardio-vascular diseases—be in shape and manage their physique with their chronic disease. 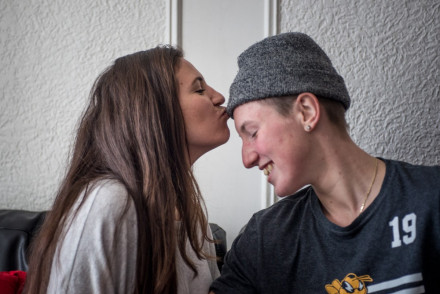 Syragakis and Prévost share a kiss after her hockey practice. Photo Sarah Boumedda