Despite an early goal from captain Claudia Dubois, Concordia’s women’s hockey team was not able to secure the victory against the Ottawa Gee-Gees for a second Sunday in a row.

Six penalty kills , including two 5-on-3 opportunities, erased the Stingers’ chances at winning this game. Ottawa scored the game-winning goal on their first 5-on-3 in the second period.

“I didn’t like the jump in the beginning of the second period,” said head coach Julie Chu. “We took six penalties and they were all deserved. And we’ve got to make sure that’s not the case.”

Not only did the Stingers give up power plays, but they picked up penalties at costly moments of the game. After giving up the game-winner on the first 5-on-3 penalty kill, Concordia conceded another 5-on-3 power play with 4:32 left to play in the third.

The two-goal deficit was already a decent challenge in itself, but the home side shot themselves in the foot with these late power plays.
Concordia’s lack of discipline and opportunism in the second period proved to be extremely costly. Stéphanie Lalancette and Marie-Pascale Bernier missed two breakaway opportunities within three minutes of each other.

Bernier’s shot was a good one, but Ottawa’s Aurélie Dubuc extended the pad to deny her. Lalancette, on the other hand, sent the puck flying over Dubuc, straight into the netting.

“We had our power-play opportunity in the first and we were able to score one,” said Chu. “But in the second we had two breakaways, another pretty good rush and another back door play. Those are four good scoring chances. We have to put one or two of those away.”

The coach made sure to get her message across to the players at the end of the second period. Chu and some of the players had a quick meeting on the bench before heading to the locker room.

“We talked a lot about the technique of how we play some along the wall,” she said. “We went back to an old habit. We kind of went two hands on the stick and ended doing more of a cross-check style.” 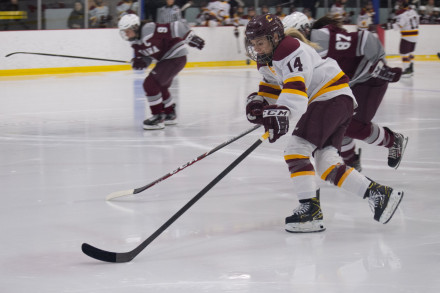 Indiscipline has been the biggest issue for the team since the return from the holiday break. A bad habit that the team managed to escape for the first half of the season.

The Stingers will have to get their discipline under control with the playoffs fast approaching. They undoubtedly have one of the best penalty kill units out there, but giving away power plays on power plays will always end up costly in the end.

Discipline won’t be the only focus for Chu and her squad as they host the Carleton Ravens for their final regular-season game of the year. The last place Ravens got the best of the Stingers earlier this year in an upset shootout win.

“They have a good goaltender and they play tough gritty hockey,” said Chu. “We have to make sure to get pucks to the net and get some traffic going.”

Concordia secured the first overall place in the RSEQ standings with a 4-1 win against the McGill Martlets on Saturday afternoon, but Sunday’s defeat might cause some trouble down the line.

With the win, Ottawa jumps to the third place in standings and sends Montréal in fourth. As everything stands, Concordia would be facing Montréal in the first round of the RSEQ playoffs, but look out for next weekend’s games.

Montréal and Ottawa both have 21 points and still have two games to play following the cancellation of their game last Friday night. The last weekend of the RSEQ regular season will be a wild one.