Olivier Hinse to Play for Aalborg Pirates Next Season

Former Stingers Hockey Captain Will Travel to Denmark in August

After donning the maroon and gold for five seasons, Olivier Hinse has not only said goodbye to Concordia, but he will soon bid farewell to the city of Montreal altogether.

Forging his skills at Concordia under former head coach Kevin Figsby and current coach Marc-Andre Element, Hinse proved himself to be a key component to the Stingers hockey program throughout his tenure at at the university. The former captain will now look to project his influence with his new team in Denmark.

On May 10, Hinse signed a professional contract with the Aalborg Pirates of the Danish Elite League. The Sherbrooke native will depart from Montreal on Aug. 1 and will report to training camp with the team immediately on the sixth.

“When I thought about it, after looking at all my options I knew that the best place […] would be Aalborg Pirates,” said Hinse. “At one point you just focus on one place and you get your mind on one idea and you go for it so that’s what I did.”

Signing a professional contract post-Stingers was a long time coming for Hinse. He admitted that he started looking over the past two years, but he said “my head was [always] with the Stingers,” during his time here.

“I started looking a little bit last summer because I wasn’t sure if I was coming back to play my fifth year,” he said. “But as soon as I decided to come back to Concordia for my last year I stopped looking.”

Hinse admitted that he only started digging deep into finding a professional team once Concordia’s playoff run came to a close this past season. Element revealed that he was aware of everything and was “pushing him to go that route.”

“We had a really good relationship so we were just talking on where he wanted to sign,” said Element.

Although the former Stinger put his hunt for a pro team on pause due to his commitment to the maroon and gold, this didn’t stop Pirates head coach Brandon Reid from keeping tabs on the forward. Before signing on as Aalborg head coach, Reid—36—remembered watching Hinse play versus rivals, The McGill Redmen during the 2015/16 season.

Despite losing the game 7-3, Hinse recorded all three goals for Concordia, in which Reid fondly put, “that probably helped his chances of signing for us.

Hinse was on Reid’s radar, but it was Stingers assistant coach Eric Labrosse that kept Reid in the loop—it was his “eye in the sky,” Hinse said. Reid said he was in contact with Labrosse throughout the season on different players.

“[…] We kept saying Olivier would be a great fit,” said Reid. “I mean, we were talking since Christmas of last season about [Hinse].”

With his departure to Denmark imminent, Hinse will be familiar with European opposition. On Dec. 17 2016, The Stingers faced off against Denmark’s under-20 hockey team as an exhibition game prior to the World Junior Hockey Championship’s.

Aware of the game, Reid looked up how it went for his newly acquired forward. Needless to say, he was satisfied with the news he received.

“[…] my responses from coaches that saw him play against the Danish team, who has some great speed, [Hinse] kept up and he didn’t look out of place,” said Reid. “That was a huge factor for sure.”

“I don’t want to change who I am. I hope my experience as a captain is gonna show in Europe, even if it’s unknown.” — Olivier Hinse

Like all athletes joining a new team, Hinse wants to be as successful as he can in Denmark—he’ll look to make an immediate impact to achieve that.

“My offensive touch, my speed, that’s what [Reid] asked of me,” said Hinse. “And for sure I’m not just gonna focus on offence, I’m going to be an all around player.”

Reid added that on the larger ice surface Europeans play on, Hinse’s pace will benefit the team in creating goalscoring opportunities. 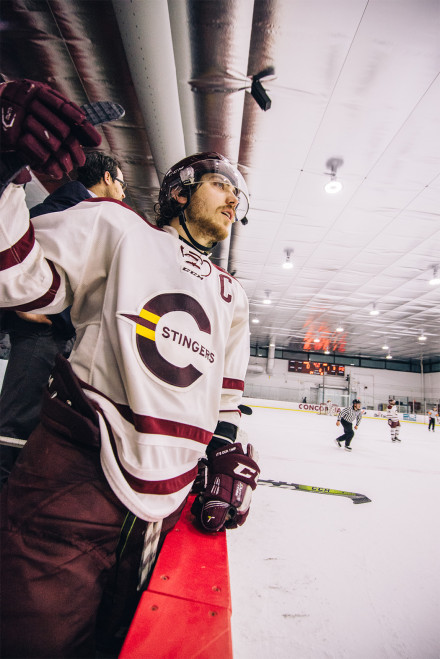 When it comes to Hinse, despite the physical traits he possesses, one of his qualities stands out among the rest: his leadership. Reid revealed one of the main factors for his team to work as a “well groomed machine” was just that.

“I don’t want to change who I am. I hope my experience as a captain is gonna show in Europe, even if it’s unknown,” said Hinse. “[…] I’m going to be the same Olivier Hinse who wants to have a good impact on a great hockey team.”

Element knows all too well Hinse’s ability to lead by example. He said that Hinse might not show it the first year in the locker room but “his leadership is gonna go on the ice […].”

“We’ve had some talks with Olivier and the other imports that I’ve signed,” said Reid “Basically his role is gonna be exactly what it was for the Concordia Stingers, but at a pro level.”

Hinse previously played with Lefebvre during their tenure with the Quebec Remparts in the Quebec Major Junior Hockey League. He also played with the two former UQTR players at the International University Sports Federation Winter Games back in January. “We had a good connection,” said Hinse.

The former Stinger also admitted that having both Lefebvre and Morin on the team will make for an easier time to adjust to their new surroundings in Denmark.

“Both of the guys who are coming with me are good friends,” Hinse said. “Together we’re going to try helping each other and it’s exciting because they’re good players.”

“We can see that our team wants to win a championship so that’s why they picked us three. It’s going to be a great experience,” he continued.

With three new recruits coming out of U Sports, Reid took the time to highlight the advantages of scouting Canadian university players. Since he’s been head coach, Reid admitted that he’s kept a close eye on U Sports players, stating that “It’s a good option for us […].”

“I think bringing guys out of the [U Sports], you’re getting guys who are hungry, to move on to a higher playing league,” said Reid. “I want guys who want to come in for a year and then get out, that’s my goal for them.”

Hinse said he’s spoken to Reid about the prospect of moving on to higher leagues, and admitted to being on the same page when it comes to that.

“I know Denmark is well placed for that [… ] We’re close to every big league in Europe,” said Hinse. “If this opportunity can help me get to bigger things why not.”

Despite the opportunity the league presents, Hinse will look to achieve the goals he’s set for his new team.

“I’m just focused on winning a championship with this team and I can’t wait to live there and see what’s going on in Denmark,” said Hinse.

Aalborg Pirates will face off against Manglerud Star in a pre-season game on Aug. 12.