No Arrests at Unusually Uneventful March Against Police Brutality

Protesters gathered at Place du Canada despite the COVID-19 for an unusually tame annual march against police brutality on March 15. 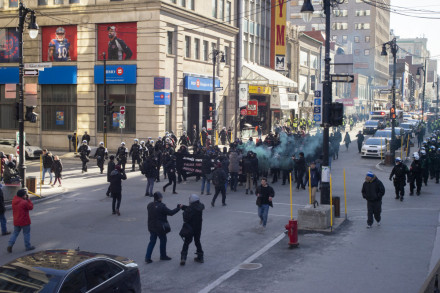 Protesters marched down Ste. Catherines St. as passerby went about their day.

Past editions have quickly devolved into chaos with property damage and clashes with police. This year’s protest was comparatively peaceful, with no arrests and little to no vandalism or altercations with police.

The annual event is organized by the Collectif Opposé à la Brutalité Policière, which chose not to cancel the protest, arguing it “[does] not contravene the spirit and recommendations of the World Health Organization on this pandemic.” 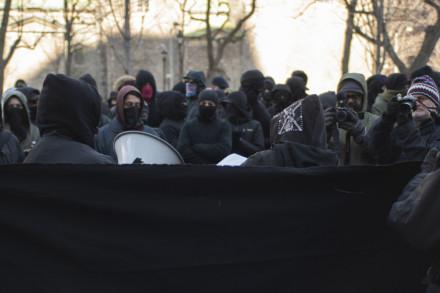 One hundred or so gathered at Place du Canada around 3 p.m. on Sunday, despite the government’s warning against gathering in large groups. The relatively low turnout had some protesters doubting whether they would march at all.

As early as 2 p.m., police encircled the square as the gathering grew. Snacks and beverages were handed out, but no hand sanitizer, masks, or gloves.

Protesters made their way up Peel St. towards Ste. Catherine St., setting off flares and fireworks as they passed Dorchester Square.

The march continued down Ste. Catherine St. flanked by riot police on both sidewalks. The sidewalks were busy with onlookers despite government directives to stay inside during the pandemic. Police vans and a large number of officers on bikes led the march and followed closely behind. 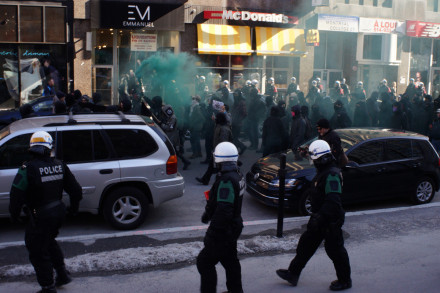 Police stood by as protesters made their way through downtown Montreal. Photo Nicholas Dundorf

As the protest neared Place-Des-Arts, police broadcast a message over loudspeakers declaring the demonstration an “unlawful assembly,” ordering the protestors to “disperse and leave the area” or else they would intervene. The message said it was because of “demonstrators continuing to engage in unlawful conduct.” 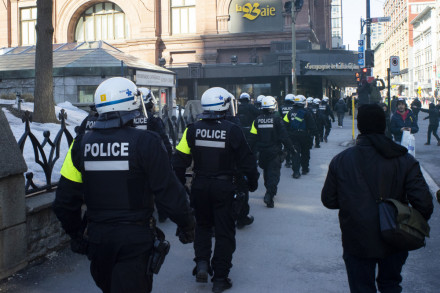 Police made no arrests during this years protest. Photo Nicholas Dundorf

The protest dissolved almost instantly once it reached Place Émilie-Gamelin. Bike police seemed to try and hunt down protesters as they scattered, but no arrests were reported by the Service de Police de la Ville de Montréal. A few officers lingered by an entrance of Berri-UQAM station, but the police presence quickly dissipated as riot police loaded into the riot vans and drove away.