Do As I Say, Not As I Do: Tips For Keeping Cool in the Face of NHL Stars

I don’t consider myself to be a particularly reckless person in most situations.

But, for some reason, I seem to have massive trouble controlling what I say and, at times, what I do when I meet or am in close proximity to professional athletes.

And, you may be surprised to find that it has happened a few times. To make matters worse—or better, depending on your view—they have all been with a few of the National Hockey League’s finest.

So, because I’ve experienced several majorly uncomfortable encounters and interactions, I’ll try to procure some sort of teachable moment, so that your experience is a little less awkward.

In June 2018, I visited New York City with my family, where we happened to be staying at a hotel so close to Time Square that every morning, I saw the same digital billboard of Marvel’s Ant Man and the Wasp’s promotional poster.

This meant we were easily able to walk to stores and restaurants located in and around Times Square, including the Italian restaurant chain Serafina.

Despite the fact that it was less than a 10-minute walk from our hotel, we opted for the true New York experience and clumsily hailed a taxi.

The New York crowds are nothing short of incredible, with so many different kinds of people—just a feast for the eyes if you’re a people watcher, which I don’t really consider myself to be.

But, my eye couldn’t help but catch a tall, leggy blonde carrying the most beautiful Chanel bag, and wearing a pair of pristine Chanel espadrilles to match.

My thoughts couldn’t help but revert to the fact that she was either a blogger, somewhat of a dime a dozen in New York, or that she had a rich boyfriend.

When I looked over to see who the man on her arm was, it turned out to be the Sean Monahan from the NHL’s Calgary Flames.

My initial reaction was to just blurt out quietly, but with urgency: “Daddy, that’s Sean Monahan,” to which I was met with a “Who’s that?”

By the time I was done briefing him on the fact that he was not an actor as my dad had thought, I was dragging him by his wrist, weaving in and out of the New York City crowds, in attempts to catch up to him, all the while my mom and sister are trailing behind us.

As I caught him, waiting to cross the street, I sauntered over to him and his girlfriend and—with the utmost air of casualty—said, “I’m sorry, are you Sean Monahan?” 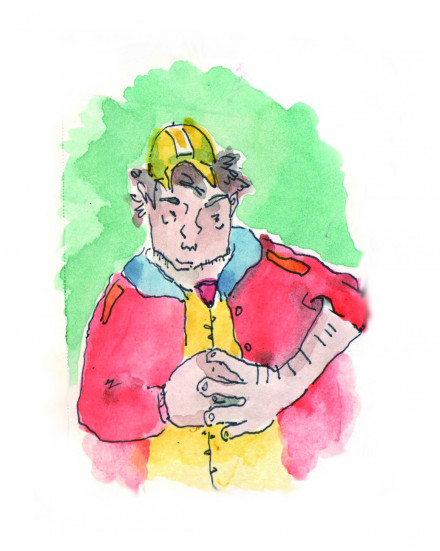 Now, forgive me if I have trouble explaining what his exact expression was like. It was a cross between dumbfounded, amused, with a very small dash of terror, as he said, “Uh, yeah.”

Now, here comes your first lesson: If you should ever come across a professional athlete in public, it’s not what you say when you approach them that you need to have thought out, it’s entirely what you say after.

As in, don’t turn to your dad and blurt out “I told you,” because you could put yourself in the risky business of birthing an incredibly awkward silence.

But, luckily for me, he and his girlfriend were so surprised that I, of all people, was able to single him out among the crowds. We had a good laugh and snapped a few pictures.

We even engaged in a light conversation about draft picks, given that the 2018 NHL Entry Draft, coincidentally, happened to be that day.

This story is not only hilariously serendipitous but one that my family and I reference or recount at least once a week—no lie.

Now, for the pièce de résistance—the encounter that truly brought to my attention that I really need to make a better effort at somewhat controlling what it is that I say out loud.

When I turned 18, I chose to donate blood, for no other reason than the fact I was legally allowed to.

The only blood donation event that I knew of was the one the Montreal Canadiens hosted in collaboration with Héma-Québec that took place towards the end of the year.

There, players from the team would circulate as donors gave blood, to thank them for their contribution.

When the time came, I recruited one of my best friends—who knows virtually nothing about hockey or the Montreal Canadiens—to come with me, and we’ve been going pretty much every year ever since.

In 2018, we had planned on meeting up and going to the blood drive just as we had prior.

That year was especially memorable, as the time that we would be there would coincide with the time the players would be circulating. This window is normally quite short, only lasting a few hours in the early afternoon.

So, I already knew that I would walk away with some sort of story to tell, but little did I know that the story would be one of the funniest and most mortifying interactions I’ve ever had in my life.

Before donating, you need to be cleared to ensure that everything is medically correct, and your blood is safe to donate.

My friend and I were both cleared, and even got set up in chairs right next to each other, which has never happened before. However, when we were brought to recovery, I started to feel lightheaded and nauseous while my friend felt fine.

She was cleared to leave, whereas I was ordered to stay. As I sat there by myself, I noticed a few players began to circulate among the crowds and saw Canadiens players Tomas Tatar, Max Domi, and Brendan Gallagher.

So, I already knew that I would walk away with some sort of story to tell, but little did I know that the story would be one of the funniest and most mortifying interactions I’ve ever had in my life.

Now, if you know me, you would know that I don’t particularly like Gallagher. As a player and part of the team, I admire his plucky spirit, work ethic, and tenacity.

However, personally, there is something about him that rubs me the wrong way, which is why when I saw him standing a few feet away from me I let out an instinctual, quite loud “UGH.”

Now, I am not sure if he heard it, but I’m going to assume as much considering he did turn around and I felt bad. While in the past I have not been afraid of vocalizing or making my distaste for him
known, I think I may have gone a tad bit too far.

So for all the haters out there, the second lesson is to contain your loathing. As much as you may dislike a player, bite your lip because it could make for a potentially uncomfortable exchange. But, this story truly pales in comparison to my next encounter.

As I continued to sit there, waiting for a volunteer to check on me, I realized that Canadiens forward Artturi Lehkonen was making his way down the line of beds, and was right next to me.

Unlike Gallagher, I actually liked Lehkonen, and have liked him since his rookie season, but I had never imagined I would meet him in person.

I literally had no idea what to say to him. I honestly looked so out of place among the hundreds of other donors who were wearing jerseys, t-shirts, hats, and scarves all emblazoned with the Montreal Canadiens logo. I sat there in my leather leggings and was not nervous, but knew full-well that I probably looked like I had never watched hockey a day in my life.

As you can probably imagine, the conversation pretty much started to deteriorate as soon as it started. I introduced myself with a “Hi, nice to meet you,” giving no indication that I had any idea who he was.

Though I didn’t feel comfortable asking for a picture with him, I knew I needed to document this interaction in some way.

So, overtaken with the crippling awkwardness of our conversation, I asked him to record a video for my younger sister, who I told him was a fan of his. For the record, she is not that big of a fan.

It was at this point that the conversation began to go so far downhill it would be considered subterranean. Apparently, Artturi did not hear my request.

But instead of asking me directly to repeat my question, he leaned over to the public relations woman who was circulating with him and asked “What did she say?”

Honestly, this caught me off guard quite a bit, and still haunts me to this day. Why had he not just asked me directly, to repeat myself? Because of this, I immediately was under the impression I had asked for something that was not permissible, so I turned to the woman and asked her if it was ok. She kindly told me that I was allowed.

So I told him to say something quick, which turned out to be, “Hi Daniela, love you.” Though the video is only seven seconds long, to this day it is still excruciatingly difficult for me to watch all the way through. 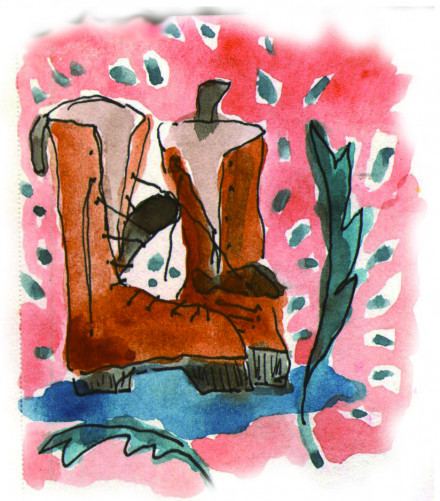 Despite this uncomfortable exchange, the self-sabotaging part of my brain which, prior to this had gone undiscovered, urged me to carry on the conversation even further. If only I had known ending the conversation at that very moment would have been the more favourable outcome in comparison to how it actually ended.

The awkward energy emanating from the interaction in that moment must have had some sort of impact on my thought process, because the only thing I could muster up to Lehkonen was the most random compliment you could possibly imagine.

“Oh by the way, I like your boots.” And without fail, almost as though he was following the script of a mediocre comedy film, he turned to the woman and asked, “What does she want?”

Now, if you think I could not have possibly said anything worse that could make this exchange go any further south than it already was—well, you’ll just have to hold onto your hats, scarves and gloves for this one because I said, out loud and directly to him, “No, I don’t want your boots. They’re too big.”

And it is with this, ladies and gentlemen, that we take a moment of silence—and I say this, not because we must pause for my truly hideous choice in commentary, but because I literally cannot remember what happened after that.

I think my brain blocked it out, as it would have maxed out my embarrassment quota for the rest of my lifetime.

However, I do know for a fact that we had some sort of parting exchange because I somehow ended up with his signed player’s card, as if I needed another souvenir to commemorate the moment.

If you ever happen to find yourself in a situation where you don’t know what you could possibly say to a professional athlete, take this as the third lesson.

Just go with something generic like “You’re having a great season,” or “Keep up the hard work.” Just stick with something that will make them feel comfortable, especially if they don’t seem like big talkers.

At the end of the day, perhaps my encounters with professional athletes have been less than ideal in some people’s eyes—but who cares about that when they make one hell of a story?