In a city where music festivals abound, Suoni Per il Popolo sets itself apart for their ability to bring together cohesive performances from local musicians while pairing them artfully with international acts.

While the lineup was full of an eclectic mix of artists who span multiple genres, a thematic choice was evident throughout the evening, creating a successful ambiance and uniting music fans with acts they may not have discovered without Suoni.

Following Mutually Feeling, Stephanie Creaghan, performing as her sound project Sœur Acéphale, brought her loop and vocal pedal to the centre of the floor directly in front of the stage.

Creaghan is a Montreal-based multidisciplinary artist who has been creating music as Sœur Acéphale for the past year and sees this project as an extension of her visual art, she told The Link after her set on Friday. 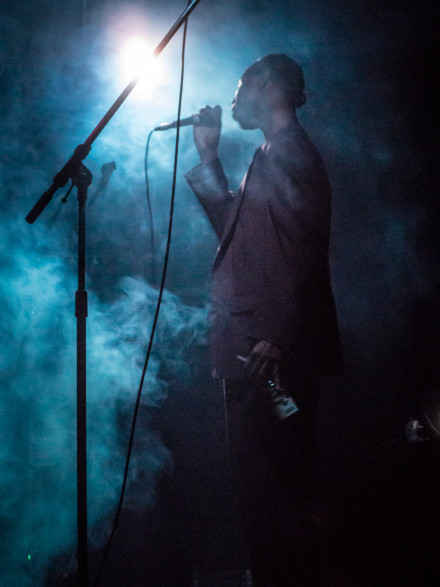 Creaghan played in Suoni Festival last year, opening for the experimental music act Puces Mary, a concert which marked her first music-specific gig, having performed as Sœur Acéphale mostly in performance and visual arts based contexts.

Encouraged by a musician friend and inspired by the loop pedal that they showed her, Creaghan began to expand her performances to involve more and more aural creation through the use of electronic equipment.

“In theory I’ve been making music my whole life, as I was trained in classical piano” Creaghan explained. “But because you don’t come across classical piano much in bands, I wasn’t sure how to navigate [incorporating] that.”

The discovery of the loop pedal which Creaghan now uses allowed her to bring sound to the front of her artistic practice for Sœur Acéphale.

Creaghan’s choice to bring her equipment to the floor of the venue in order to perform while engaging with the audience, created atmosphere and a visceral connection with her music.

The audience watched as Creaghan brought her single microphone down onto the floor in a sharp gesture, looping the hollow sound it made as it hit the ground where we all stood.

The rhythmic loops were layered with her strong voice as she recited lyrics about desire, and the frustrations found within intimacy. Creaghan paced around the room, weaving between audience members, recruiting them as witnesses to her expressions.

“Music [has become] the most straight-forward way to produce a sense of catharsis.” — Stephanie Creaghan

The multidisciplinary artist spoke about finding that “music [has become] the most straight-forward way to produce a sense of catharsis” and her hopes for continuing to create works as an experimental musician is to “generate an atmosphere where that is echoed in audience members”.

The remainder of the evening built upon much of what Creaghan had articulated—as the Norweigan composer and improvisational musician Danielle Dahl played her set surrounded by music equipment.

Accompanied by a percussionist, the two played a mellow set that drew on worldly ambiance which merged her clean and almost operatic singing. Sometimes her singing was set against the backdrop of abstract rhythms, and at other times, set only against her own soothing, layered vocals.

Friday’s full programming concluded with two acts who mirrored the complex thematic planning initiated throughout the night with Soho Rezanejad, the Dutch-Iranian, New York based solo act who captivated La Vitrola for the duration of her performance. 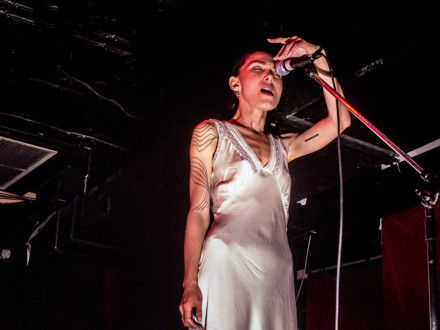 Rezanejad stood barefoot in front of the strobe light to the side of the stage as the droning, enchanting instrumental swelled from her computer which sat to the opposite side.

Occasionally stopping to place a hand on her heart, Rezanejad moved gracefully across the stage, bringing herself to the microphone before merging her electronic music with her haunting vocals.

Rezanejad’s set brought together many different aspects of the acts who came before her, such as the interplay between the sound of the human voice and music created electronically.

The tonal variations traveled through melancholy, longing and into a place of rest as she carried us through to the end of the evening.

Part of the Copenhagen ambient music duo KYO headlined Friday’s Suoni bill with the accompaniment of Jeuru, a soul singer from Queens, New York. Jeuru’s vocals warmly broke through the cool tones of the ambient composition, completely engaging the audience; an attentive intimate group that had remained into the early morning.

These final acts reinforced the overall atmosphere, united by the process and the performance of each artist as all five acts merged constructed electronic music with the organic tones of their voices, bringing the evening through expressive soundscapes that resonated through the mind on a sleepy walk home.