One year ago, Mohamed Fahmy was held in an Egyptian cell so small that he and his other two inmates had to take it in turns to move.

On Thursday night, the freed 42-year-old reporter spoke in front of a full lecture hall at Concordia. His goal: to fight to free other Canadians suffering the same way he did in foreign prisons around the world.

Many governments today are using vague terrorism laws as a license to kill and imprison journalists, he said. “The ‘press’ on our jacket used to be a protection—now it’s a target.”

In 2013, the former Al Jazeera English Bureau Chief became a target himself when he was accused of supporting the Muslim Brotherhood in Egypt and detained for 438 days in Egypt’s Tora Prison. He has repeatedly called the charges baseless.

In “Scorpion Prison” he slept on the floor of a freezing cold underground room without access to sunlight or flushing toilets. “All you have in that cell is a hatch you can look through to the corridor on the other side,” he said.

Surrounding him in prison were extremists and terrorists who celebrated when his friend, American journalist Steven Sotloff, was kidnapped by ISIS in Syria and beheaded in September 2014. 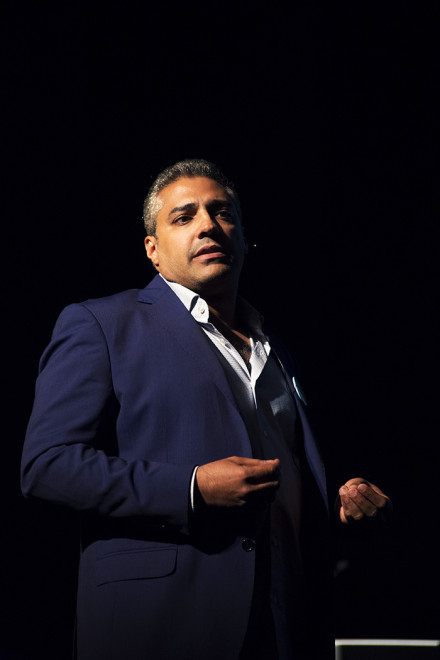 Shortly after his release from prison, Fahmy and his wife Marwa Omara founded the Fahmy Foundation to advocate on behalf of reporters, photographers and journalists who have been unjustly detained for practicing free speech abroad.

As of December last year, The Committee to Protect Journalists reported that 199 journalists were being held in prisons worldwide. On Thursday night, Fahmy said that now more than 1,400 Canadians are being detained abroad, and he will continue to push for a new law to compel the Canadian government to work and free them.

“We need a mechanism that will obligate the Prime Minister to call the Egyptian president or other presidents to say: “Hey listen, this guy’s no terrorist—get him out of prison,’” he said.

Similar laws exist in the United States, Mexico, Brazil and Germany, he added. “Why don’t we have it as a law [here]?”

As Fahmy spoke, he wore a “Free Homa Hoodfar” badge on the left lapel of his blazer. Hoodfar, a 65-year-old scholar and former Concordia University professor, has been held in Iran’s Evin prison since June for unclear reasons.

Fahmy offered a reason: “It’s becoming a very obvious trend that many of these people who are detained abroad are basically bargaining chips,” he said. “And I believe Ms. Homa Hoodfar is a bargaining chip.”

Fahmy and Hoodfar’s imprisonments have many similarities, said Ahmed Al-Rawi, an assistant professor of communication studies at Concordia University and author of Media Practice in Iraq.

“They were both exercising a kind of freedom of expression contrary to the governments in these two places [Egypt and Iran],” he said, speaking by phone. “One was persecuted for exercising her right and duty towards academia and finding the truth; the second for doing exactly the same thing—but working for a media outlet.”

Fahmy was eventually pardoned in 2015, a day before Egyptian President Abdel Fattah el-Sisi was scheduled to fly to New York for a United Nations General Assembly gathering.

Fahmy insisted that he was used as a political pawn in the same way that Hoodfar is being used by Iran’s government today.

“I don’t call Ms. Homa Hoodfar a prisoner,” he said. “I call her a political hostage in Iran.”