Punks and hipsters from across the city gathered at Le Divan Orange to warm up, have a few drinks, and dance to escape the January cold.

The night consisted of a medley of rock bands from Toronto and Montreal, including The Barrel Heads, a DIY punk-turned-rock band. Their set was by far the liveliest and most entertaining. The five members of the band had an energizing stage presence.

They were on fire.

Half way through their set a woman brought out a python and wrapped it around the lead singer, Mike Mosquitolini. The crowd kept dancing, but they were obviously fazed by the presence of a potentially lethal animal draped around the singer’s neck.

Almost immediately an animal rights activist ran up to the stage and started screaming at Mosquitolini. It was awkward, but the band pulled through and kept playing. After a long while, the woman stormed off and left the bar. The rest of the set was even more vibrant than the first half. 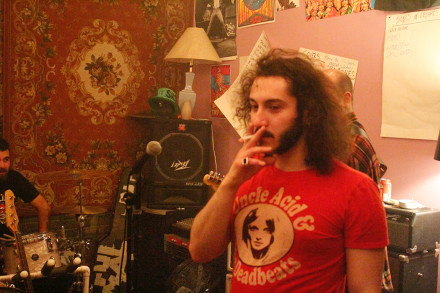 Mosquitolini, better known as Mosquito Mike, fits the classic role of the sexy and charming lead singer. He’s got big brown eyes and long eyelashes. He wears cowboy boots and often ends up at least partially naked at their concerts.

At Le Divan Orange, the self-proclaimed “ship of fools” played songs from their soon-to-be-released album. Originally a punk band, The Barrel Heads have morphed their sound into a jamming fast-paced rock with obvious influences from The Ramones and The Rolling Stones.

The 22 year-old rock and roller started The Barrel Heads with Alex Kotsornithis and James Chiha six years ago.

Mosquitolini seems to run the show. He does all of their accounting, marketing and the majority of the organizing for their shows. The band is dead set against signing away their souls to a label, and right now they’re functioning without a manager—but that means they have to do everything themselves.

“I’m constantly running late and I’m constantly fighting sleep deprivation,” Mosquitolini said. “Seven days a week I’m the first one out of my house. I’ll leave before everyone is awake and I’ll be back by the time they’re already sleeping. And that’s been happening for the past six years.” 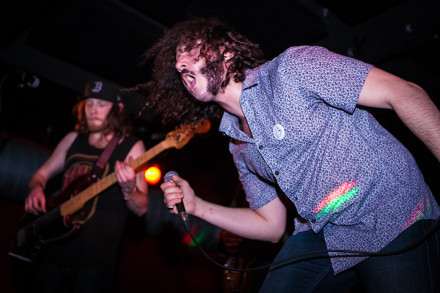 Johnny B. and Mosquito Mike perform at Le Divan Orange.

The rock and roll lifestyle isn’t always roses. All five members of The Barrel Heads work 40 hours a week at their respective jobs, and most of them still live with their parents. Kotsornithis runs his family business, a Greek restaurant in Villeray. Mosquitolini manages the kitchen at MooseBawr.

They get into fights and they all seem exhausted, but to the band, it’s all worth it—this is what they want to spend their lives doing. They want to spread the rock and roll energy. According to Mosquitolini, they all just want to have a good time.

They get together and practice twice a week. Their rehearsal space is in a dingy building in Griffintown—the kind of place you would expect them to play. The sounds of other rock bands echo through the crisscrosses of narrow hallways.

“I can’t wait to get to a place where we’re just focused on playing. I know there’s still going to be work, but I just want to spread this feeling and see how many people dig it.”

The vibe is laid back but also professional. They may pass around a joint at the beginning of rehearsal but all the band members remain serious about the music they’re making.

“We drink and smoke and stuff before jams but there’s still no time for messing around,” The bassist, Johnny B. said. “I’ve jammed with a lot of people who just come in and smoke themselves [to sleep] and they can’t play a goddamn note.”

Their professionalism is paying off; the band is going places. They’ve opened for Dayglo Abortions—a big name in the Canadian punk scene— three times, and recently they were asked to open for the iconic ex-Misfits singer Michale Graves.

The Barrel Heads just spent the last six months working on their new album. They’ve also made it to the semi-finals in the Rockalypse II competition, where the lucky winners will get to perform in Italy this summer.

But their success hasn’t come without ups and downs. The band is on their third rhythm section in six years. According to Mosquitolini, one of their drummers went through a psychosis that was influenced by heavy drug and alcohol abuse,
which created a violent and hostile environment for the band. They kicked him out after he came to rehearsal with a self-made weapon consisting of locks and rope.

In 2015, around the same time they lost their drummer, Kotsornithis was diagnosed with cancer and was in and out of the hospital undergoing chemotherapy treatments. Mosquitolini said that they didn’t think the band would be able to continue going, but somehow they ended up pulling through. 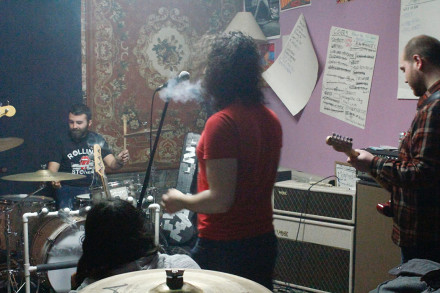 “Alex was in the hospital and it was just me and James, cause we didn’t have a bassist at the time. And then the drummer left. We had no idea what was going to happen.”

One night, Mosquitolini and Chiha were at the Vendome metro station together, depressed and unsure of the band’s future.

“I remember asking James ‘What are we going to do?’ And then the metro came, and we got up, and you know how you look back to check if you forgot something? I look back and on the seat that we were sitting on and someone had graffitied, ‘Don’t worry it only gets better’. And it did, it only got better. Alex got better and we ended up finding another drummer,” Mosquitolini said.

Since then, The Barrel Heads completed their first tour—a four day rat race starting in Ottawa, moving through Peterborough and Toronto and ending at Rob Fest in Montreal.

“When you’re on tour it’s like a different world. You’re with your band in a van and you have to put up with each other,” Mosquitolini explained.

Mosquitolini reminisced about dropping acid in the van when they were parked outside Trent University in Peterborough, Ontario. Half of the band left with the keys and the others were stranded and bored.

“We’re just waiting there, playing poker and then we’re just like, ‘Hey man, there’s acid under the seats,’” said Mosquitolini. “So we all drop acid. And then they come back and they’re like, ‘Dude we’re playing a show in an hour.’ So we get there, we’re tripping out and we scare the shit out of the crowd.”

They may be exhausted, but The Barrel Heads are investing in a future for themselves and their band. They’re riding the rock and roll wave. Eventually, Mosquitolini hopes the band will be able to quit their day jobs and live off their music.

“I can’t wait to get to a place where we’re just focused on playing. I know there’s still going to be work, but I just want to spread this feeling and see how many people dig it.”