McGill University is attempting to deny a group of students and journalists their right to information.

In an official motion filed to the Commission d’accès à l’information on Dec. 7, 2012, McGill requested the ability to disregard nearly 20 Access to Information requests from a list of 14 McGill students filed throughout October and November 2012.

Any person is legally eligible to make formal written requests to the government or public bodies for access to information held by these bodies under the Access to Information and Privacy Act, as well as the Act respecting documents held by public bodies.

In addition to denying these initial requests, McGill is asking that it be granted the ability to “disregard future requests […] submitted by the respondents or students of McGill or student journalists of The McGill Daily and The Link (Concordia University) or by persons associated to McGilliLeaked or by persons that could reasonably be linked to such requestors.”

The majority of the information being sought out by the requests in question often deals with McGill’s research, investments or funding—particularly related to the military. Other requests dealt with information pertaining to the university’s administration, or to the respondents themselves.

According to the motion, however, McGill is alleging that a “complex system” of ATI requests has been put in place by the respondents “as a retaliation measure against McGill in the aftermath of the 2011-2012 student protests.”

“I’m really disappointed that they would do this,” said Christopher Bangs, McGill student and founder of McGilliLeaked. “It’s actually pretty ludicrous that they would think that we have this secret, coordinated effort to destroy the university through ATI requests. It’s nonsensical.”

McGilliLeaked is a blog created by Bangs that is dedicated to compiling legally obtained information about McGill through ATI requests. McGilliLeaked featured one ATI filed by a reporter from The Link on the costs incurred by the #6Party occupation in February 2012.

“It’s not like the 14 of us have coordinated our requests or have some secret motivation that’s underlying this,” said Bangs. “My motivation was to get access to the information that I really need for the things that I am doing in and around McGill.”

McGill believes the series of ATI requests to be “abusive because of their systematic nature” and “unreasonable.”

“What we want is permission to ignore abusive requests from these individuals, or others associated with them,” said Julie Fortier, associate director of media relations at McGill in an email to The Link. 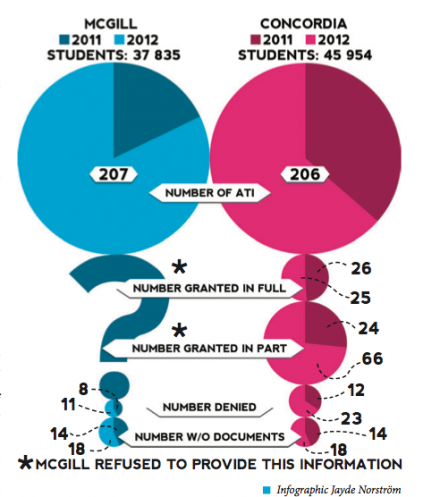 When asked what constitutes an unreasonable amount of ATI requests, Fortier responded that McGill received 170 requests in 2012, but only 37 requests in 2011.

The motion also states that McGill doesn’t have the resources to process this amount of requests, and that attempts to respond to these requests has impeded the university’s activities.
According to Fortier, McGill employs two full-time staff members to take care of the processing of ATI requests.

Unlike McGill, Concordia does not employ any full-time staff members to specifically attend to the processing of requests, but rather includes this responsibility in the functions of three other employees—including one of the university’s legal counsels, when required.

One of the biggest concerns for Bangs is the ability for this motion to allow McGill to refuse important information to a wide range of people for a broad list of reasons.

“There is no other good way to get this information except through requests, and now they’re trying to take that away,” said Bangs.

The 14 students mentioned in the motion have hired a lawyer and will be handling the case collectively.

“Sadly, the commission is so backlogged that it could take a year or a year and a half before we get anywhere,” said Bangs. “It’s kind of a waiting game for now.”