“I’m very proud of how we competed and how we grew as a team since day one when we got together,” said Stingers head coach Rastko Popovic.

The game was close until the end of the second quarter. With the score tied at 30, McGill went on a 14-3 scoring run to close the half. From then, McGill cruised to a third consecutive conference title.

“We worked so hard last year and last summer to get here, but from then and now, we improved on everything. It feels good but it burns for now,” said Concordia forward Olivier Simon, who collected seven rebounds and scored nine points in the loss. 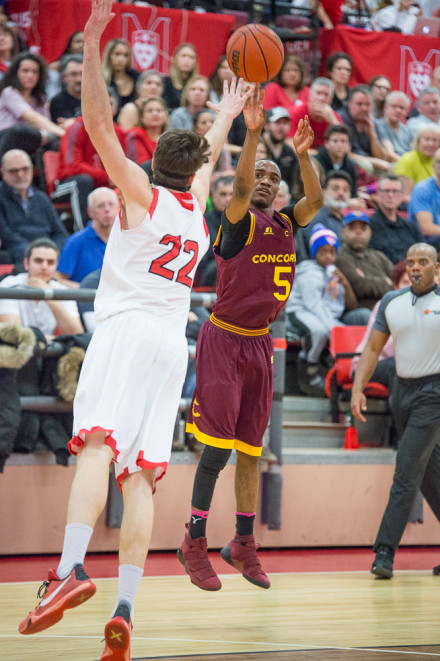 The Stingers look ahead to next season where they return a solid young core. Photo Daren Zomerman

The game was a battle between Concordia and McGill’s starting point guards. Second team all-star Ricardo Monge took the Stingers on his back as usual and dropped 19 points in his twenty minutes of play. McGill’s Jenning Leung scored 16 points and grabbed seven rebounds.

McGill protected their home as they do every time. Guard Avery Cadogan scored 19 points and collected five rebounds in 20 minutes.

The Stingers will be losing forward and first-team all-star Ken Beaulieu as he finishes his fifth and final year of collegiate eligibility.

“I grew a lot mentally from playing with the Stingers,” said Beaulieu. “My experience playing for the Stingers was fantastic, I have no regret choosing Concordia.”

With the loss, the Stingers miss out on a chance to play at the U Sports national tournament.