Starting off the third period down 38-22, the Stingers knew it would take some grit to get back into the game. Head coach Tenicha Gittens said the team, in the first two quarters, lacked the defensive edge they needed against Martlets’ centre Alex Kiss-Rusk, who lead the team with 22 points, 18 of which she scored in the first half alone.

“Defensively, we had relapses, it wasn’t the same defensive effort as we had on Thursday when we played them. So that could have been better. In the second half we did a better job with that, we did a better job of resisting [Kiss-Rusk], but then she got put backs because we weren’t boxing out.” 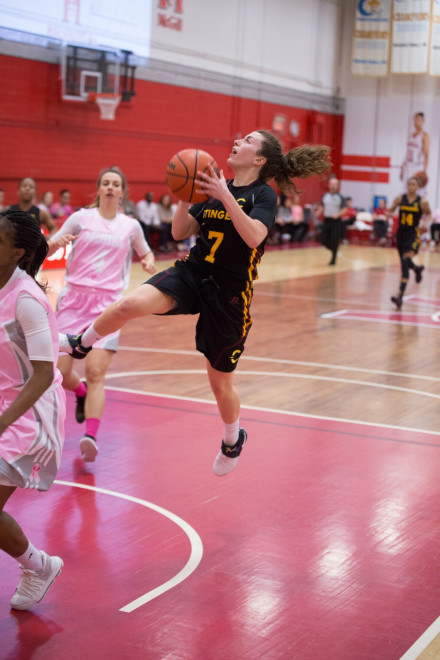 Stingers Caroline Task (#7) fights through traffic to get to the net. Photo Daren Zomerman

The team also had to adapt the way they brought the ball up the floor as star point guard Jazlin Barker was benched for disciplinary reasons, the coach explained.

“It was a little different, but you’ve still got to be able to play if a teammate is down,” Gittens said. “You still have to be able to step up and execute, and have that poise, and I think we lacked poise in the first half, and they were speeding us up offensively, and we didn’t exploit that.”

When Barker stepped onto the court, the entire team instantly looked more confident and composed, despite McGill almost doubling their score. After a couple steals, fast breaks, and successful drives to the bucket, Concordia appeared to have a second chance at the win.

But as the Martlets mounted pressure, the Stingers lost their composure and took their third loss against the team this season, bringing their regular season record to an even three wins and three losses.

Coach Gittens said the team will be working over the week at getting possession on defence and working the ball up the court.

Concordia won’t see McGill again until Feb. 10, where they’ll be playing with a home-court advantage. By then, Gittens said the team will be ready to beat the top-seeded Martlets.

“If we want to win a championship, if we want to get out of the first round, depending on what these other teams do, you have to beat McGill,” she said. “They’re the best team, the second in the country, and they’re definitely the best in the conference right now. So they set the bar, and we have to go up there and go it.”

Next, the Stingers will have a chance to get back in the win column when they host the last-place Bishop’s University Gaiters at 6 p.m. on Jan. 18.