Concordia and McGill have a rivalry that tends to show off the best of U Sports hockey. It’s passionate and full of the perfect blend of skill and physicality.

Over the last few years, the other thing is, it’s been is close. The games are almost always tight and come down to the wire.

Games like that rely on single moments where a team can break through the pressure to decide them. It’s about momentum swings. A big enough one and a close game gets blown wide open.

That was the case in McGill’s victory in the thirty-third annual Corey Cup game.

A tight, energetic 1-0 game after the second period quickly became a 5-2 finish that included two empty net goals for McGill and a powerplay goal by Concordia in the final minute.

“It was a big swing, it was hard to recover from,” said Stingers forward Colin Grannary.

The swing came along with referee whistles in the third. A five minute penalty call, followed by another one seconds later, set the Stingers up for a long five-on-three penalty kill and the game was never quite the same.

“I told the guys I’m pissed but I’m not pissed at them, they played a really good game,” said Stingers coach Marc-André Élement.

He and his players were incredibly unhappy with the calls, and lack thereof. The Stingers bench boss also noted that his star defenceman Carl Neill took a blatant high stick between the two calls and no penalty was assessed. 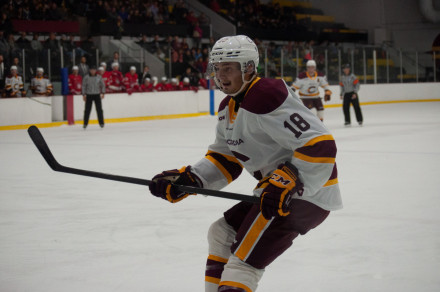 Right-winger Colin Grannary looks to get back into rhythm after missing a couple games due to injury. Photo Caroline Marsh

The swing also continued when goaltender Marc-Antoine Turcotte, who played an incredibly strong game, went down and had been examined by trainers before deciding to stay in the game through apparent pain.

Injuries are plaguing the Stingers heavily right now. Captain and top forward Philippe Sanche is out this week with a hand injury (that does not appear to be a break) and his linemate Alex Katerinakis is also out.

On top of this, defenceman Matthieu Desautels has been unable to play for the year and has now gone through hip surgery, though he is expecting to be able to play later this season.

“We’ve got young guys coming in, and it’s up to them to step up and take a little extra ice time that they wouldn’t have to if all the guys were back,” said Neill. “Moving forward, we’re gonna have to be ready for anything because guys are going down pretty often.”

Despite all of this, alongside Turcotte, two players did give the team some bright spots to look at in the game.

Grannary, fourth-year right-winger, returned to game action for the first time since an offseason procedure. He played with a knee brace that is expected to be off soon.

With a strong defensive presence, a slick assist on the game’s opening goal, and a well rounded, dangerous game in the bag, Grannary looks to be ready to make an impact immediately.

He spent the night on the line of another bright spot that has distinguished himself as one of the Stingers top players just a few games into his U Sports career.

Forward Tyler Hylland added yet another highlight reel goal to his collection, bringing flashiness to his game not seen on the Stingers since Anthony Beauregard.

“He’s on a hot streak now. He’s got a hot stick. He’s confident and it’s good to see for us since we’re not scoring as many goals as usual,” said Neill. “Hopefully the streak will continue for many years.”

Hylland seems to be growing with every game and has earned enough trust from his coach that he’s used in all situations on the ice. He’s already become a go to player for his team.

“I keep growing, and getting more experience and getting more confident,” said Hylland. “I think I’m just gonna keep getting better over the course of the year and it’s the same with our team.”

For now, the team will have to rebound from this Corey Cup defeat against the Royal Military College Paladins Sunday evening and see if Hylland’s promise of growth shows itself quickly.