Stingers Come Away With a Point After Heavily Outshooting Rivals

While the outcome of the game didn’t fall in their favour, the post-game morale was one of pride.

With three recent additions to the team in Kyle Jessiman, Jeremy Diotte and Félix Lauzon, the team has bolstered their roster to start the new semester.

Concordia now has a full lineup, something they have been lacking for almost the entire season. They played this challenging game with confidence.

The matchup against rival McGill was a carnival game at the McConnell Arena and tensions were high on and off the ice. The crowd didn’t shy away from rooting for the home team in their varied shark, care bear, or penguin onesies etc. The sentiment on the ice was not much different. Fights, tripping, and holding players down on the ice weren’t uncommon happenings.

With Chase Harwell getting a cross checking penalty in the first period, he said that the physical nature of this game played to the team’s strengths.

“The atmosphere is crazy, the emotions are nuts so it’s easy to play a tempered game,” said Harwell. Nonetheless, he says that the team isn’t fazed and that they tend to play well under those circumstances.

Regardless of their loss, Concordia put up 58 shots compared to McGill’s 37. Perhaps a result of a revamped offence with the team’s new additions and injured players returning to health.

Carl Neill was happy with how the defense played this game. He thinks that their goalie Jessiman “played a really good game as well which helped us out a lot.” 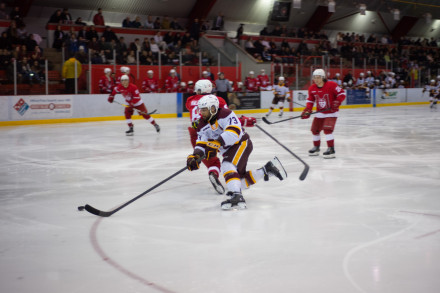 Even after the second goal scored by McGill, 34 seconds into the final period, Neill said that they were confident in Jessiman, which allowed them to focus on tying the game once again. Seconds later Harwell scored leading them to overtime, which McGill won.

It wasn’t an easy first match for Jessiman to start his time in U sports with the Stingers.

He repeatedly mentioned how proud he was and said his performance “showed how mentally strong he is.”

Jessiman wish they had won but he is happy with his performance and enjoyed the atmosphere of the game. He mentioned being nervous, but said that “once you feel the puck, it’s just a game [like] any other game.”

Élement isn’t the only one who was pleased with Jessiman’s performance. Neill said that particularly since his first game was a carnival game it “can be a little intimidating but he did a really good job and we’re happy for him.”

Neill went on to say that not only is he happy with the way that Jessiman played but that overall the new players have been doing well. He liked the way they played offensively and acknowledges that “they’re working really hard which is all we can ask for.”

Despite the loss, Harwell said that the team played well. Whether it’s their game plan or their one-on-one battles, he had plenty of praise for his linemates. “It’s easy to play well when you have two guys on your line like Colin Grannary and Anthony Beauchamp working with you.”

Regardless of the results of the game, Élement said every university hockey game should be like this one. The energy of the arena could speak for itself. He said that “for 10 bucks [the crowd] had that show, it’s great for hockey.”