Montreal Comedians Laugh in the Face of Sexism

Approximately 30 per cent of English language shows at the Just For Laughs festival this year were performed by women, and many of those comedians were booked on Off-JFL, which the festival brands as its “alternative, edgy sibling.”

You would think that women doing stand-up wouldn’t be thought of as alternative and edgy, but more often than not, comedy shows in Montreal only feature one or two female comics on a lineup.

The Link asked four renowned Montreal comedians to shed some light on why they’re often the only women on stage, and share their own personal experiences with discrimination, sexism and what it’s like to work in such a male dominated scene.

Answers have been edited for clarity and length.

The self proclaimed happy, raunchy, and pop-culture obsessed Tranna Wintour has been doing comedy for four years. The Montrealer and Concordia University graduate focuses on producing comedy that encourages female and LGBTQ empowerment and communicates trans experiences.

The Link: Why do you think it’s important to encourage LGBTQ positivity by using comedy as a medium?

TW: In terms of mainstream visibility and mainstream success, it’s very hard when you’re doing comedy as a minority that hasn’t been embraced by the mainstream yet. I think when the transgender experience is depicted in media, whether it’s film or TV, it’s always done in a very dramatic way. It’s usually a sad story or a challenging story, but I think that there is a lot of humour in the trans experience. And I think that it actually translates to a very broad audience. I mostly perform in front of cis-hetero audiences and they get it. Because I think that a lot of the trans experience is also about identity, and that’s universal.

TL: Have you ever experienced any rude comments made by audience members when performing?

TW: In May, there was a show called Queer and Present Danger, which is an LGBTQ comedy show that tours across Canada. They brought it to Montreal and asked me to co-produce. We put together an amazing lineup. So everything went really well that weekend, but then the very last show was a late-night show on a Saturday, and for whatever reason we just had a very hostile audience. Just a lot of very homophobic and misogynistic people.

TL: Why do you think this audience was so hostile?

TW: I don’t think they knew what the show was because obviously if they had, they wouldn’t have been there. There are often a lot of people at late-night comedy shows who are already drunk and are just looking for somewhere to continue their night.

So basically the audience sort of hijacked the show, they were very aggressive, they said homophobic things to the acts while they were on stage. Some comics were more confrontational with them, others sort of kept doing their thing with blinders on.

TL: How did you handle such a traumatic experience?

TW: After that show I felt like it was important to talk about what had happened. So I made a post about how these comedy shows that aim to empower queer and female voices are so important and so necessary, because this kind of hatred is still happening. And in a city like Montreal, it’s easy to take our progress for granted, and it’s easy to feel like, “Oh we’ve come so far, there’s no more prejudice,” but there is.

It’s two very different things, one to be heckled and then another to have hate-speech directed towards you while you’re on stage, because as comedians, we all deal with being heckled. And there’s always creative ways to deal with that. But as a performer, when you’re on stage and you’re having hate speech directed at you, that’s no longer heckling—that’s literally a form of abuse.

Kristen Finch is a Montreal Comic Con emcee, creator of The Pretty Feminist Comedy Show, and a stand-up comedian of five years. Finch incorporates nerdiness and silliness into her hard hitting feminist routine, while also remaining relatable and down to earth to her audience.

TL: Can you describe any experiences you’ve had where someone was rude or sexist towards you?

KF: One time a host introduced me as “the prettiest one on the lineup.” I was the only lady. So that was pretty annoying. It was only my third or fourth time up so, of course, I bombed. And then he went up on stage and said, “Well folks, at least she was pretty.”

TL: Why do you think there aren’t more female performers?

KF: One reason might be going to a place where there aren’t other women. When you go up and you are the only woman on the lineup, if you bomb, then 100 per cent of the women that the audience saw that night bombed. Whereas if you’re a guy and there are ten guys in a night, and four of them bombed, then 60 per cent were great and 40 per cent were not.

Chantal Desjardins is a jack-of-all-trades in the media industry. Desjardins started her career in her hometown Winnipeg, MB where she was a TV sports anchor. Now she makes Montreal traffic-jams bearable on the radio, is an anchor at Sportsnet, has her own voiceover business, and, last but not least, does stand-up.

TL: Have you ever been told “women aren’t funny?”

CD: All the time. You get it more often than you think you would at this stage of the game. But usually it’s from ignorant beer-drinking, truck-driving, uneducated guys that don’t really know, so you just have to brush it off.
I feel like you have to have a thick skin in this business anyway. Comments like that also feed your motivation to show them that girls actually are funny.

TL: Why do you feel women are underrepresented in stand-up?

CD: I feel that a lot of it has to do with the way we’re brought up. Even today, it’s often the guys that are the class clowns. Girls typically aren’t. I grew up with a lot of girls who ended up being engineers and architects and doctors, but I didn’t grow up with a lot of girls who were class clowns. But I was a clown. I was the fattest little kid with the worst haircut—and I was funny.

TL: Why do you think all-women comedy shows are necessary?

CD: It’s kind of like having a fundraising activity for your own sex, and just saying, “Girls are funny!” These events will build momentum and eventually there will be more and more of these that it won’t even be an issue to have an all-female comedy show.

Eventually there will just be so many funny girls, and you’ll see that four out of five comics are female and you won’t even blink an eye. I think that’s the ultimate goal, that you’ll see that kind of lineup and it won’t even raise an eyebrow. 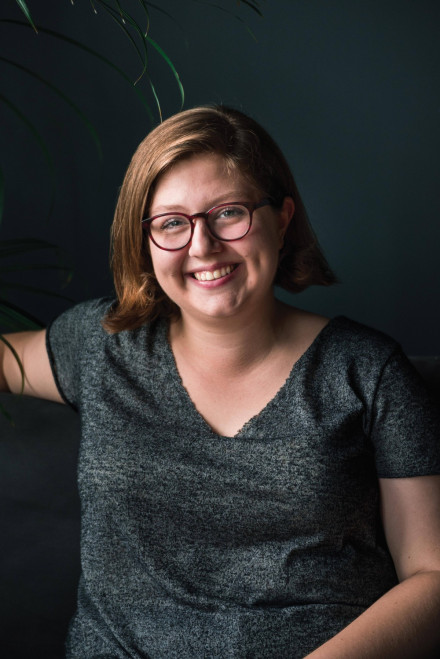 D.J. Mausner is the co-winner of this year’s Just For Laughs Homegrown Competition, along with Courtney Gilmore (and the first two women to do so). Originally from Toronto, D.J. Mausner has been doing stand up since she was 16 years old. The outspoken comedian picked up sketch comedy two or three years later. Now she runs the sketch comedy show Joketown, and co-hosts the Experts podcast, which explores the intricacies of the Canadian comedy scene with popular and thoughtful women in the industry.

TL: Have you ever encountered sexism within the industry in Montreal?

DJM: When I’ve dated other comedians it feels like they’re kind of instigating this sense of competition, and this has never happened in any of my relationships with people who weren’t in comedy. A dude that I was dating who also did stand up was booking a [comedy] show and he was trying to look for more women and make it a more equal line up. I was like, “Oh well why didn’t you ask me,” and he was like, “Oh I just don’t really consider you a stand-up [comedian].”

TL: Do you think this is an isolated incident or is this rampant throughout the community?

DJM: Pretty much every comedian I know calls himself a feminist, but they’re not doing nearly as much as they could be doing to actively support women in the community. It’s more than just putting two women on your lineup of ten people, and it’s more than just being like “I think women are funny.” It’s attempting to educate themselves on why this institutional pressure exists, and how it plays out and how it may affect them.

TL: Is this mentality changing at all?

DJM: There’s a show [I did] called 50-50 for Off-JFL. It’s half improvised and half scripted and the entire cast is women. The producer [was] an improviser and a great comedian named Vance Gillis. He decided that he just wanted it to be an all-female cast, and he doesn’t market it that way at all. It’s just the case, which I think is really cool. He gave that opportunity to a bunch of really great comedians and actors, who I think should have that opportunity, and who all happen to be women.

For the last three years, Ladyfest has elevated and celebrated female talent in the comedy industry in Montreal. Ladyfest gives stage time to women of all backgrounds, and holds inclusivity as its highest priority. This year, Ladyfest will be showcasing a variety of homegrown comedians from Sept. 4 to 10. Festival Director Deirdre Trudeau and Diversity Consultant Sara Meleika shared their views on why an all female festival is crucial in Montreal.

TL: Why do you think it’s important to have an all female comedy festival?

DT: It’s so very important to me to highlight and celebrate the insane amount of talent in this city and in this country who just happen to be part of a certain half of the population. Female comics receive significantly less time and recognition and respect than they deserve. We’re just trying to do our part to tip the scales a little, and have a gosh darn good time doing so!

SM: Comedy is art, it is personal and stylized, and thus each individual finds themselves being drawn to certain comedians and not others. There are comedians whose voices might resonate deep within you, and others whom you might wish to quickly dismiss.
In order to engage in this at all, there must be the opportunity to be exposed to a range of different kinds of comedy. Moreover, as a Middle-Eastern/North African woman I don’t always see myself reflected in many traditional female comedians, and thus might have been led to believe that there is no room for me in comedy. However, at an event like Ladyfest, I would finally have the chance to see that there are so many different female voices in comedy, and surely mine could be heard too.

TL: How is Ladyfest different from other comedy festivals in Montreal, other than only showcasing female talent?
DT: So far as I know—and please correct me if I’m wrong—we are the only festival that allots an equal amount of time to every type of comedy we can get our hands on. Over ten days we have stand up, sketch, improv, and storytelling shows, as well as variety nights for anything and everything in between. If it’s funny, we want it.

SM: Ladyfest has a beautiful spirit of wanting to learn and grow in becoming a community event that hears many voices and incorporates them all. It is truly a warm, generous atmosphere to be in, where steps towards creating as inclusive a festival as possible are really being sought out in a genuine way. Ladyfest also offers a great variety of comedy—it’s not simply a stand up, sketch, or improv festival—but rather it compiles some of the best of all of those genres into one festival.