It was an auspicious start to Saturday afternoon’s game between the Montreal Canadiennes and Canadian Women’s Hockey League expansion team Kunlun Red Star at the Bell Centre for the home team.

Noseworthy’s goal was her first of the year and helped get the 5,000-spectator crowd into the game.

“It feels amazing,” said Noseworthy. “It’s funny because I actually went into this game like: ‘I’m going to score my first goal today’ and then it happened which is just a huge weight off my shoulders.”

Unfortunately for the team, however, that goal would turn out to be their last.

The team went into the first intermission up 1-0, but not entirely happy with their performance to that point. 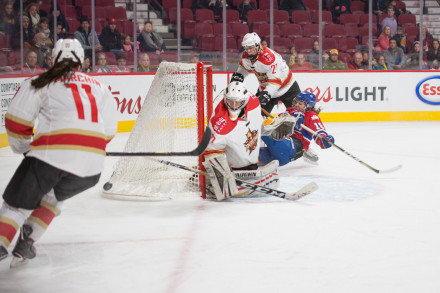 The Red Star made a good impression in front of the 5,000-person crowd. Photo Daren Zomerman

During the intermission, veteran Cathy Chartrand noted that going into the second having scored the first goal was a confidence boost, but that changes needed to be made in order to keep that momentum in their favour.

It was evident even after the first period that all was not right with Les Canadiennes. They were committing far too many turnovers, limiting their ability to build a consistent offence.

In the second period, Kunlun netted their first goal of the game off a wicked scoring chance. Maschmeyer stood on her head trying to make that save, but just couldn’t make it work.

With the score locked at 1-1 heading into the third period, Les Canadiennes looked for redemption. But it would not come.

With 6:01 in the period, Kunlun scored their second goal, coming off of a penalty kill after Melanie Jue served a minor for body checking.

Shortly after, Kelli Stack had her chance, bowling over Emerance Maschmeyer and putting Kunlun up 3-1, where they would stay for the rest of the game.

Maschmeyer looked hurt after the play, but played out the remainder of the period without surrendering another goal.

Les Canadiennes head coach Dany Brunet was unimpressed with the effort put forth by his team this afternoon.

“We have to give credit to our opponents,” said Brunet. “They were well-prepared, and we played what I think is our worst game this season. I don’t excuse what happened here, but unfortunately it’s a part of the game.”

The team had been doing their homework in preparation for this matchup, mainly watching game footage of their opponents. They had an idea of what Kunlun would be bringing to the table, but they still managed to come up surprised.

Brunet believes this is a result of a bad attitude heading into the game.

“We need to be able to handle big events like this,” said Brunet. “I don’t think we were able to handle this, especially on an emotional level, and unfortunately it resulted in [today’s loss].”

He feels that the way the team carried itself on the ice this afternoon gave them no possibility of success.

“Even had we played 8-on-4 this game, I don’t think we would have had much more success,” he said.

Kunlun brought forth an excellent roster of both North American and Chinese players who held their own and mounted a comeback against Montreal, widely known as one of the best teams in the league. 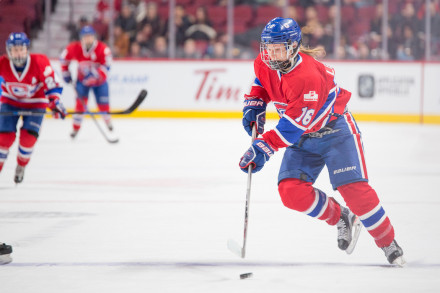 “[The comeback] just shows that we’re never going to give up in a game,” said Kunlun’s Kelli Stack.

Stack believes Les Canadiennes underestimated the Red Star coming into this game, due in part to Kunlun’s record on the season. The team came into this game with one win and three losses through their first four games.

“This is their hometown crowd, they’re always the best team in the league and they’re super skilled,” said Stack. “I think they weren’t expecting any type of a battle out there, and so when we didn’t give up and we were coming out there they didn’t really know what to do.”

The league’s commissioner, Brenda Andress was in attendance at this afternoon’s game and was thrilled by the Bell Centre turnout and the final score.

“As you can see, our league has exactly what we had hoped for,” said Andress. “You can see that the two teams from China can compete with teams across the league, and they fit in perfectly.”

The competition will continue Sunday afternoon, as the two teams take the ice for the second of three games this week. Canadiennes’ coach Dany Brunet is hopeful going into these final games, and believes his team can make a comeback to win the series.

“If there’s one thing that doesn’t worry me, it’s coming back in this series,” said Brunet.