International Students and Workers Fight Back Against Immigration Reform

A Lesson in Decentralized Organizing

Lamoussa Diabaté was in his third year of his PhD when immigration minister Simon Jolin-Barrette’s immigration reform was released.

“It was a total letdown,” said Diabaté, an international student doing research on prostate cancer at Laval University in Quebec City. “I had to do something. My friend and I decided to organize the resistance in Quebec City. People quickly joined us.”

The provincial government’s stance on immigration has shifted drastically multiple times within the past month.

On Nov. 1, Jolin-Barrette introduced a reform to the Quebec Experience Program, or PEQ, a program allowing international students and workers to apply for fast-tracked permanent residence. Under the reform, only programs and jobs on a list the government released would be allowed to apply for the PEQ. The list cut over 300 programs that had previously been admissible.

On Nov. 8, barely a week after introducing the reform, Jolin-Barrette announced a full withdrawal of the reform.

Diabaté, who grew up in Côte d’Ivoire, Algeria, and France, had received other PhD offers. There were many disadvantages to Laval University—the tuition was more expensive, the program was two years longer—but he wanted the North American experience.

He was told he could apply for permanent residence after completing his PhD.

Diabaté got to work without delay. He started a Facebook group so students and workers could share their stories and exchange information. Within days, the group had thousands of members from all over Quebec.

It was unclear to Diabaté if his PhD in epidemiology was on the list. PhDs in medicine were listed, but the people answering the phones at the immigration ministry’s offices didn’t seem to know if epidemiology counted as part of the medical category.

Regardless of whether he was personally affected, Diabaté felt called to act because he had many friends in law, in economics, and in other affected domains.

“I know their stories,” he said. “I told myself that these friends, they did so much to come here, and this is making it very difficult for them.”

All resistance efforts used the same hashtag, #PEQinjustice, which helped the movement seem coordinated from the outside.

“It’s as if it was a centralized movement, but in reality, it was decentralized,” Diabaté said. “What made the movement successful were the collegial actions, actions that were done in an independent, autonomous way, but with one objective: make the government backtrack.”

On Nov. 1, an MNA from the Liberal opposition gathered a few international students and workers and invited them to the National Assembly’s Salon Bleu to tell their stories.

De Bargigli works with marginalized people at risk of homelessness. Her job was not on the list.

“It was like a broken radio,” she said. “‘All we want to do is respond to the labour shortage,’ he kept repeating. He wasn’t listening at all. We were crying, and he wouldn’t budge.”

But the day after their testimonies, Jolin-Barrette announced the introduction of a grandfather clause. Students and workers already in Quebec would be admissible for the PEQ under its previous regulations.

Students and workers kept up the pressure.

On Thursday, Nov. 7, Diabaté and other organizers in Quebec City planned and executed a protest in front of the National Assembly. The day after that, Montreal protesters lined up outside Jolin-Barrette’s office to hand in their curriculum vitae, a symbolic rejection of the fact that many of their programs weren’t on the list.

By the end of the week, the government announced a temporary suspension of all changes to the PEQ.

In the days following the full withdrawal, students and workers officialized their collective: they are now Étudiant.e.s et travailleurs.ses internationaux du Québec, or Collectif ÉTIQ.

Collectif ÉTIQ organizers knew their work wasn’t over yet, because Jolin-Barrette said the government would hold consultations proposing a new version of the reform.

So they are asking to be consulted.

“Usually, student unions are the ones that are consulted,” Diabaté said. “But this is our problem, and we’d like to take part in the consultations to talk about our own problem. We insist on this.”

If consulted, Collectif ÉTIQ would say there should be no list of jobs or programs that are admissible for the PEQ.

“What I found outrageous is that the minister apologized to Quebecers, not to the people affected.” —Lamoussa Diabaté

“How can he judge that one program is good and another isn’t?” said de Bargigli.

“What we can’t forget is that there are people who didn’t arrive before November, people who weren’t necessarily on the territory, but who made decisions based on the old version of the reform,” she added.

The Link contacted the Ministry of Immigration for a comment on Collectif ÉTIQ’s demand. In an email, Geneviève Chartrand, a media relations officer for the ministry, wrote that the minister “indicated his willingness to consult various social actors on the PEQ reform, in particular economic actors and those in the education sector.”

The Coalition Avenir Québec government claims that the programs were chosen because there was a labour shortage in those fields.

The list released on Nov. 1 included programs that no longer exist, such as domestic science. Radio-Canada reported that this program was offered to women, teaching them how to be good housewives.

“Concordia, along with other Quebec universities though the BCI [Bureau de Coopération Interuniversitaire], is also ready to work toward an appropriate strategy that will allow students and professors to be recruited quickly in areas that the government sees as priorities in order to address labour shortages,” she wrote.

International students and workers have been struggling to make sense of these fast-paced changes.

“When you don’t know where you’re going tomorrow, I can tell you it’s very difficult,” said de Bargigli. “I’ve had to take a step back from all of this, because it was impacting my health.”

“I left Belgium, my blood family, and I finally succeeded in creating a family here, and that’s when they tell me, ‘No, the year and a half you lived here won’t be recognized.’ It’s an injustice.”

“What I found outrageous is that the minister apologized to Quebecers, not to the people affected,” Diabaté said. “There are quite a lot of people who were psychologically affected by this reform.”

Members of Collectif ÉTIQ see the immigration reform as the CAQ government’s latest attack in a series of xenophobic policies, including law 21. 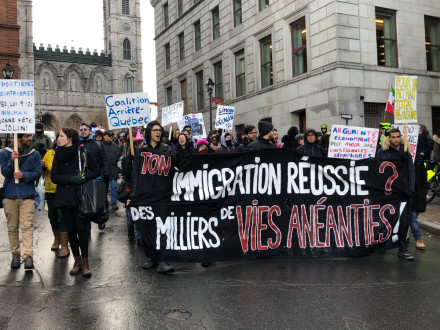 They aren’t the only ones to see the changes to the PEQ as part of a broader anti-immigrant outlook.

On Nov. 22, about 100 festive-looking people gathered in Victoria Square. They brought banners that read, “Happy birthday, Jolin,” blew into party horns, and held up handmade signs that read, “Duplessis reviens t’as oublié Jolin,” or “Duplessis come back, you forgot Jolin.”

“The reform of the PEQ […] was the last straw that broke the camel’s back regarding the CAQ’s identity and xenophobic policies,” said the description of the Facebook event. “Let us bring hats, balloons, confetti, and cake to show the government’s lack of seriousness!”

Jolin-Barrette was scheduled to speak about immigration reform that morning to the Chamber of Commerce of Metropolitan Montreal.

The protest outside was organized by student groups at Université du Québec à Montréal, in conjunction and solidarity with students and workers previously affected by the changes to the PEQ.

“It must be said: the government plays with identity politics, their politics exclude immigrants,” Diabaté said. “We understand, with this latest law, that the Legault government is showing us that we are not welcome in Quebec.”