The province’s only figure skating team finished second out of an 11 school field in the Ontario University Athletics Fall Invitational competition on Nov. 23.

Points are rounded up from various events throughout the competition and tallied to determine an eventual winner.

The McGill team faced some early adversity, having to switch some skaters due to last minute injuries.

The duo of Tali Zuckerman and Cheng Ling finished first in the Intermediate Similar Pairs competition, while Nakajima and Greben finished second in the Senior Similar Pairs category.

McGill’s skaters had plenty of reasons to celebrate despite the hectic conditions. Greben’s first place finish in the Gold free skate competition was the highlight of the team’s solo finishes while Meng and Garnica also made splashes, each finishing second in the men’s free skate and star ten free skate categories, respectively. 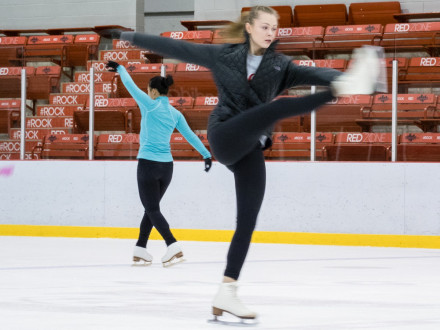 Tabatha Cannon paired up with Ariane Beland to perform in the Short Dance event, finishing eighth.

“There are a couple of things we need to work on, like our spins and our footwork, and the edges that tend to get called,” explained Tabatha. She wants herself and Beland to work towards becoming more precise on their moves and their landings.

Still, enough first and second place finishes helped bring McGill’s score to 40 points, second only to the University of Toronto’s 56.

Nakajima says she was proud of her team’s performance and how they finished, despite needing to replace injured skaters.

Her hope is that the team’s success will inspire other schools in the province to create figure skating teams. They’d be able to compete against each other in smaller events as they build up to bigger competitions like the ones organized by the OUA.

Their next competition will be in January. In the meantime, the team is preparing for their annual holiday show on Dec. 9 at the McConnell Arena. The show allows the team to show off what they’ve been working on throughout the year, while helping them pay for competition expenses.