How to Travel to South America, or Elsewhere, on a Student Budget

Travelling is expensive, period. But there is a multiplicity of ways to minimize costs and extend your stay—lest you have to cut your voyage short and return home to your parents’ place penniless, counting the days until university reconvenes.

This is surely a no-brainer. Even if you’re only travelling for a month, you could save anywhere from $300 to $600, unless you live in those penthouses by Peel—don’t be afraid of letting a stranger crash in your bed.

You can always wash sticky sheets, and you bought that ornament they stole at a flea market anyway.

*Booking flights and getting buses *

Don’t use the sites of major airlines such as American Airlines, TAM or Air Canada; you’ll be able to find far cheaper flights on budget search engines, which may in fact sell you a flight with one of the aforementioned for a fraction of the price.

Don’t use eDreams or Skyscanner—CheapOair, STA Travel and Student Universe are far cheaper. Flights to South America are far cheaper from Toronto’s Pearson Airport or NYC’s JFK than Montreal’s Pierre Elliott Trudeau, so take a rideshare through Amigo Express or from a potential maniac on Craigslist to either of these cities.

Typically you can fly to Bogotá from JFK for less than $300USD. Within South America, just like Europe, airlines sometimes offer far cheaper flights than the bus so price-check before you go to the bus station for a mammoth journey.

Also, take local buses—perhaps you’ll have to bear witness to animal cruelty, for livestock is often transported inside or on the roof of these buses—but it will certainly be far cheaper than the AC paradise advertised in the bus terminal billboard.

*Don’t go to the hostels on Hostel World *

There’s a reason the hostels on Hostel World are more expensive than local hotels—they’re catering to a North American/European target market that they presume are rich.

Instead, I recommend Couchsurfing—there are always thousands of hosts in South America’s metropolises. If you’re travelling in Western Europe this becomes a necessity rather than a cost-saving device since you’ll be lucky to find a room for less than €25 anywhere in the vicinity of a cities centre.

Plus Couchsurfing ensures you won’t just be hanging out with the gap-year crew in your hostel that are heading straight to the Caribbean family holiday home once their trip around the Banana Pancake trail is over.

If meeting new people, attempting to speak a different language and perhaps being occasionally obliged to do stuff with your Couchsurfing host doesn’t appeal to you, then go to a local hospedaje or casa particulare where you’ll typically pay a third of the price of the boutique hostel advertised at the top of Google.

*Eat at the market *

Admittedly, this is tough for vegetarians. Expect to eat a lot of vegetable tortillas and rice throughout Bolivia, Peru and Ecuador.

Don’t be picky. If there’s nothing palatable on the menu just ask for a plate. Make sure you reiterate that you don’t eat ham or chicken though, as they’re often not considered meat. For all you carnivores and pescatarians, there’s a wealth of choice.

Eat fish on the coast and meat further inland, as poor infrastructure often means the fish is very not fresh. You’ll typically pay the equivalent of around $4 for a plate that you might not even come close to finishing.

Just don’t get lured to the Mexican restaurants advertised in Lonely Planet or you might end up paying more than you would in Montreal for a relatively tasteless dish in comparison.

Through sites such as Worldwide Opportunities on Organic Farms (WWOOF) and Work Away you can have great, altruistic learning experiences whilst almost eliminating your living costs.

These two sites aren’t the be-all-and-end-all but operate worldwide and basically serve as a platform for you to contact hosts wherever you are—they do charge a fee for access to their databases, though.

I found Work Away was far better value but far less regulated than WWOOF. Make sure to contact them well in advance and ensure you know exactly what is expected of you, lest you have a shock on the first day when you’re informed you’re expected to work in excess of the 25-hour-a-week limit in a completely different job than what was advertised.

I went to work at a wine bar in Mendoza and ended up getting outsourced to do maintenance work on pushbikes at a neighbouring company the wine bar was in debt to.

All will offer free accommodation; some hosts will offer just breakfast whereas others will feed you all day long. 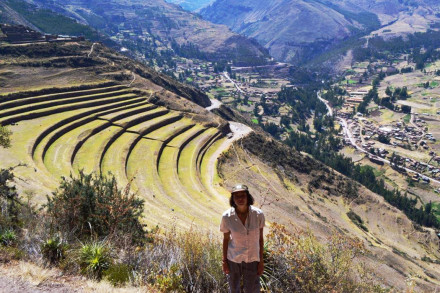 Relying on locals speaking English is a terrible byproduct of globalization-slash-empire and the cultural complacency it has bred throughout the English-speaking world.

Just the basics will go a long way even with those used to speaking English with tourists; when digressing from the classic Banana Pancake tourist trail, it’ll be a necessity unless you want to risk potentially being exploited or merely sneered at.

In South America it’s cheaper to take language classes outside of Chile, Argentina, Uruguay and Brazil (the continent’s most expensive countries). If you make it to Panama or Guatemala in Central America then it’ll be even cheaper.

If you want to practice your rusty skills in the cities where practically everyone speaks English then just say you’re Lithuanian and they’ll persevere with you in Spanish or Portuguese rather than switching to your mother tongue. I’m not being flippant; I did this and it worked.

Some places are more expensive, and nicer, than others. So do your research on travel blogs or articles like this rather than through a travel advisor or, to a lesser extent, Lonely Planet.

Don’t go on tours! For excursions like Tiwanaku in La Paz, the Galapagos Islands off Ecuador or the Sacred Valley in Peru there are often local buses (or flights in the case of the Galapagos) you can take to the vicinity of their locations where you’ll just have to pay the entry fee sans tour.

Plus you won’t have to spend the day listening to people from Manhattan scolding their children for being late back to your coach which will ferry you from tourist spot to tourist spot, before stopping at an exorbitant restaurant that the tour company has a deal with for lunch.