For the 29th annual Night of the Homeless, hundreds marched on Friday night to bring awareness to the city’s homeless—not only to the public, but government officials too.

“We have women on phones to reserve a bed at two o’clock, and within five minutes all the shelters are full,” said Boulos-Winton.

She added that Chez Doris is the only day shelter for women that is open seven days a week. “Any woman can come no matter what sort of difficulty she has, though all are affected by extreme poverty,” said Boulos-Winton.

A number of other women shelters and organizations such as La Maison Marguerite, Le Chainon, Rue des femmes, Auberge Madeleine, and The Native Women’s Shelter were all there in support of homeless women. “They all complain that they do not have enough beds,” she continued.

“Every night shelters for women are crack filled,” said Gaudreau. “If we don’t have place to go for the women, they will stay in dangerous situations […] created by the lack of resources for women.”

Boulos-Winton said welfare rates in the province need to rise. 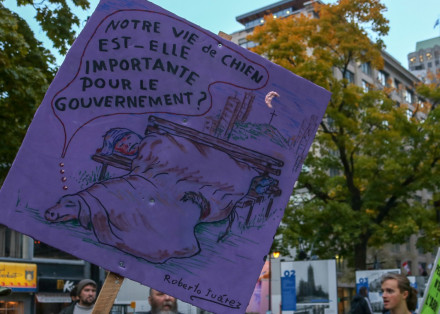 Several picket signs were on display during the march questioning whether the government take the issue of homelessness seriously. Photo Elaine Genest

Chez Doris also offers a Housing First grant, explained Boulos-Winton, which aims to help homeless Aboriginal women settle into private apartments. With the current welfare rate, Boulos-Winton said it’s difficult to help a single person find an apartment when their welfare is only $633 per month.

“They’re not very motivated to stay in an apartment and because they’re constantly worrying about money because all they have left, after paying rent and utilities is [approximately] $50,” Boulos-Winton said.

“All these Aboriginal women who are homeless, quite a few of them have children, and their children have been removed and are in youth protection,” continued Boulos-Winton.

“It’s kind of perpetuating the vicious cycle of residential schools because Aboriginal children are raised by other people and they get bounced around everywhere, so they have no roots.”

Gaudreau called for the Quebec’s new government and Legault, to invest in building more social housing, as well as an “increase in welfare cheques, not cuts”.

“It’s a big question mark in terms of how much money [the new government] are they willing to put into programs and into creating new social housing,” said Boulos-Winton. “I’m all for the government creating jobs, but there’s a lot of people who aren’t capable to getting to that step. So [we need to give] resources to organizations to make sure that people are well enough to participate in the economy.”