Stingers’ Strong End to the Season Holds Promise for the Future

As the full-time whistle blew on the afternoon of Oct. 20, the Stingers had just capped off a five-game unbeaten run, tying the UQTR Patriotes 2-2 on the final matchday of the season.

Things started looking up for the young team. In their match against the league-leaders UQAM, the Stingers set up a resilient defensive block for most of the game before allowing three goals in the final 10 minutes to lose 4-0.

“We were nervous going into the game, as they were undefeated and dominating the league up to that point,” Humes said. “We only allowed one goal until the last few minutes, and we showed ourselves that we could play a solid defensive game against the best teams.”

Despite the strong showing, the Stingers dropped four consecutive games.

During this skid, news broke that midfielder and co-captain Chama Sedki had left the team. Sedki had been leading the team in goals until that point and was depended on to create offence and control play in the middle of the park.

With one of the team’s leaders gone, much of the leadership responsibility fell on the shoulders of Humes and the other veteran players on the team. 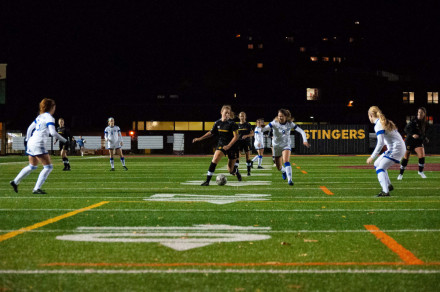 Sarah Humes, who led the team in goals with six, dribbles the ball in midfield while being surrounded by three Carabins players.

“It was unfortunate that Chama left and created a void in the squad, but that gave a chance to the rest of the girls to step up and take some ownership,” Sutton said.

“It even gave incentive to some of the rookies to start to assert themselves more into the leadership dynamics.”

Humes was given sole possession of the captain’s armband, making her the main leader of the young team. She led the way for the Stingers with six goals and one assist on the season.

“I’m a quiet person, so I had to step up in terms of being a vocal leader,” Humes said. “I think it was good for me in the end, as it helped me be more accountable on and off the field and made me a better player.”

With Sedki no longer available for selection, Sutton switched up his lineup and formation. Alessia Di Sabato took Sedki’s place in the attacking midfielder role, with Bryanna Campbell and Madeleine McKenzie sitting behind her.

Humes led the front line, flanked by Sara Carriere and Alyssa Dubeau. Dayne Lebans and Haley Wheatley — who started the year as a winger — lined up as fullbacks while Casey Koscher and Chloe Ricciardi held the line in front of their keeper.

A last-gasp equalizer by Campbell sealed a draw against McGill on a cold night at Percival Molson Stadium in early October, which kicked off the Stingers’ strong end to the season.

“Our coaches prepared us really well, but we also started playing with more confidence and communicated more on the field. That’s how we were able to play calmer and it’s a big reason behind our success.” Casey Koscher

“Feels good to have the coach’s trust as a first-year player, that’s why we’re able to go out there and work hard for one another,” Campbell said after the game.

Six of the players in Sutton’s preferred starting lineup were rookies. Their effort and quick adaptation to the level of play rewarded his increasing confidence in his young players.

One of those first-year players who continued to impress was Koscher, whose composure on the ball defined the Stingers’ play in the second half of the season.

“Our coaches prepared us really well, but we also started playing with more confidence and communicated more on the field,” Koscher said. “That’s how we were able to play calmer and it’s a big reason behind our success.”

The Stingers played with more poise and made better decisions with the ball: a drastic difference from their previous style of rushed clearances and poor giveaways.

With a strong run to end the outdoor season and a newfound identity for the young group, the Stingers look ahead to the indoor season, beginning in January.

Games in the winter are a good chance to practice certain tactics and keep the team playing together almost all year round.

“It’s a good chance for us to work on individual players and further develop some of the younger players, which is especially important with our young group,” said Sutton.

“We’re really looking to strengthen some of the weaker areas in our game, and just get tighter as a team and keep a consistent work ethic.”

Despite the tough start and the challenges that the team faced from the start, the Stingers women’s soccer team trusted the process and remained resilient to turn their season into a positive one.

Now with a full season under their belt, the younger players like Koscher and Campbell, led by Humes, will be hungry to take the next step and fight for a playoff spot next fall.