Get in the Pool

Mike Mandanici squares himself behind the lush mahogany wood and leans over it, eyeing the white ball while setting up his pool cue.

After smacking the ball home with a loud crash, he strides around the table with a confident smile on his face and does it twice more.

He looks like Pittsburgh Jewish-rapper Mac Miller with his white toque, winter sweater and skinny jeans. The 20-year-old bends down and lines up another shot. This time, he can’t sink the orange five-ball in the corner pocket, but puts his opponent, Damon Palamarek, in a bad spot.

Palamarek, 35, thinks about his move for a second, then ambitiously places his cue around his back and sets his hand steadily on the forest-green felt, carefully preparing his shot.

After a breath he strikes the cue ball—only to have it completely miss the eight-ball, ricochet, and bounce back to exactly where he set up the shot.

The roar of laughter ends with a clink of pint glasses and a pat on the back, something Heidi Przepiora, the self-proclaimed unofficial coordinator of the pool league at McLean’s Pub on Peel St., says is what the league’s all about. 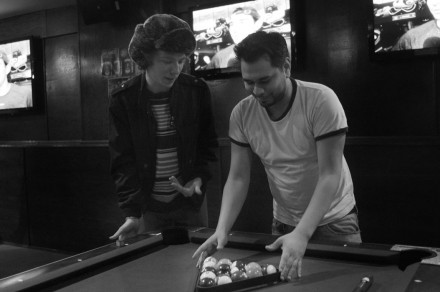 “The pool league really brought our regulars closer together,” she says. “[It] definitely has that Cheers sorta feel to it.”

Ironically, Przepiora, who bartends at the pub, doesn’t like pool. In fact, she openly hates the sport and admits that if she can so much as hit a ball, she’s happy.

But she organizes the teams, records the data and hands it in to the league, which consists of around 30 teams and is played at various bars around Montreal. The teams switch venues, but McLean’s sponsors a team that plays its home games at the pub.

Organized pool leagues like this one are all aligned with one another and have tournaments to see who the best amateur pool players are in Canada, and are then sent to an international tournament in Las Vegas, NV.

But pool here is more than just going to Vegas. “Going to Vegas would be fun, ideally,” says Palamarek. “Sometimes you have a game and it’s okay, but sometimes you play and you just have a blast.”

Though he says it’s just for fun, Palamarek clearly has a passion for it; he proceeds to list off different techniques and explains the intricate geometric complexities of the game—or sport, as Palamarek stresses. 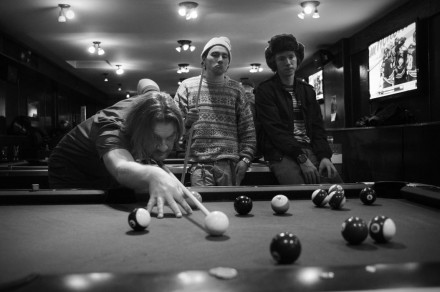 “You’re leaning over, you’re balancing, you’re strategizing—oh yeah, it’s definitely a sport,” he says. “It’s like baseball. […] The only difference is that the table is the medium.”

Pool, however—or cushion, billiards and snooker for many—is not considered an Olympic sport. But its worldwide popularity is still very apparent at McLean’s.

Victor Marin is from Venezuela, and says the level of play here is comparable to the quality back home. Mike Salvador, an El Salvadorian, was taught how to play by his dad before he moved to Canada. Palamarek himself is originally from Alberta and was similarly taught by his grandfather.

“Originally I just came here and started playing by myself because I knew no one else in the city,” says Palamarek. “Then some people started playing me and that’s how I got to know most people here.”

The same can be said for bartender Przepiora, who Salvador now calls Mom.

“I’m from Ontario and didn’t know anyone,” says Przepiora. “I’m happy here. My job is to come in and serve my friends.”

The gang admits that when the drinks are served, the quality of the pool goes down a little.

But their team saves most of the drinking for afterwards, and sits comfortably at middle of the pack in the league. Others are more serious and come with professional-caliber pool cues and customized bags. But it’s all about the beer and company for Salvador et al, who also all like to brag about their accomplishments in the league to Przepiora.

While the backgrounds are different, the faces and the glorious taste of beer always remain the same, and the action continues outside the regular Tuesday league time slots, too.

“The rest of the week it’s the pool league plus a bunch more competing for fun. [It’s] always good times and we have a fantastic group of regulars,” says Przepiora. And hey—the tips are great, too.