The tension between Concordia and McGill fans was as thick as the fog covering Loyola Campus. Both groups were in for a treat at the Réseau du sport étudiant du Québec men’s rugby final, a game that will be remembered as one of the craziest finals in recent times.

After 100 minutes of some of the most intense rugby this season, Stingers captain Yannick Fortin accepted the RSEQ men’s rugby champions banner, confirming a long awaited championship season for his team. The scoreline went Concordia’s way with a score of 28-21.

“We were winning, then we were losing, then we tied—it was going back and forth the whole time,” said fly half Joey Fulginiti. “It was an emotional rollercoaster of a game.”

The Stingers were 16-9 with under four minutes to play in the second half before eight-man Philippe Bibeau-Remedi scored a late try and kick taker Joey Fulginiti kicked the two-point convert, sending the game to overtime.

Both teams found themselves tied at 21 in overtime, before a blocked McGill kick was returned all the way back to McGill’s end zone by centre Graeme McClintock, giving the Stingers a 28-21 lead and ultimately, the victory.

“McGill hasn’t lost a final in eight years and we finally picked it up,” said flanker Lucas Hotton. “It feels great to be part of this team.“

The game was so tense that it took 25 minutes for the first points of the game to be scored as the deadlock disappeared with the fog. A penalty given to Concordia gave the opportunity for Fulginiti to put the Stingers up 3-0.

Late in the first half, a mistake by the Concordia players gave the ball to the Redmen and the action concluded in a penalty awarded to McGill, which tied the score.

The Maroon and Gold didn’t want to leave the pitch with a tied score. In the last seconds of the half Concordia pushed hard and were awarded a penalty kick, which was converted by Fulginiti, giving Concordia a 6-3 lead at the half.

Concordia added to their lead early in the second half as inside center Yannick Fortin forced McGill to concede a penalty, which was once again converted by Fulginiti.

The Redmen responded right back, giving them a 10-9 lead. The Stingers seemingly began to lose both confidence and the game. 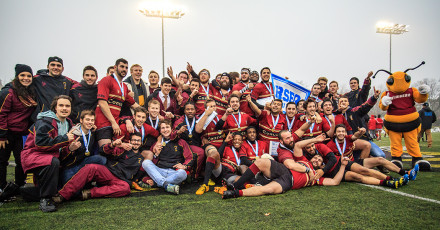 The Concordia Stingers men’s rugby team captured their first men’s rugby title since 2005 with a win over the McGill Redmen on Sunday, Nov. 23. The Stingers had lost their last four previous championship games, all against McGill. Photo Shaun Michaud

“I came out of the press box to shake the hands of the opposing coaches and I ended up having to turn around and go back up there for the overtime,” – Stingers’ head coach Clive Gibson.

Following a penalty converted by McGill kick taker Thomas Stokes at the 16th minute of the second half, the Redmen had a four-point lead with the score being 13-9.

Mistakes caused by the Concordia players resulted in McGill being awarded yet another penalty that brought the score to 16-9, having then allowed 13 unanswered points

The Redmen supporters were ecstatic, many of them chanting, “Let’s go Redmen!” and nagging opposing players on the field.

Late in the game, the sense of urgency surrounding the Stingers was palpable. The game was now down to additional time and the Maroon and Gold was pushing harder to get the equalizing try.

“We were taking a lot of penalties late in the second half,” said Fulginiti. “We were able to build phase after phase and stuck to our game plan and it worked.”

The Stingers were very deep in McGill’s end and a final second push by eight-man Phillippe Bibeau-Remedi ended in the try zone. All that was needed to send the game to overtime was a conversion by Fulginiti.

The crowd erupted when the ball crossed the uprights. The Stingers were still in the game and there would be 20 minutes of rugby left to decide a champion.

“I came out of the press box to shake the hands of the opposing coaches and I ended up having to turn around and go back up there for the overtime,” confessed head coach Clive Gibson.

After a tight few minutes, the first half of overtime went Concordia’s way. A low kick by fly half Joey Fulginiti was picked up by winger Caleb Jordan for the try, but the try was not converted as Fulginiti missed his kick.

The Redmen weren’t backing down, however.

In the first seconds of the second half, the Redmen already found the way to score. However, their conversion was missed as well, tying the game at 21 points apiece.

In the third minute of the second half of overtime, a McGill kick was blocked by inside centre Graeme McClintock and was returned all the way for a try. Alongside a successful conversion, the Stingers were up 28-21 and were seven minutes away
from the title.

Hard fought battles in rucks and scrums for the remaining minutes of overtime gave Concordia their first championship in five straight final appearances.

“It was never-ending,” said Gibson about the game. “We stuck to the game plan for the most part and were rewarded with the gold medal in the end. I’m enormously proud of them.”

Concordia can say that the fifth time is the charm, as it took five tries to finally beat McGill in the RSEQ men’s rugby finals.

“Fifth time’s the charm, definitely,” agreed Hotton. “But hopefully it won’t take five times to beat them next time.”