Festival Review: Otakuthon, a Weekend Where Weebs and Otakus Can Go Wild

“It’s this atmosphere, it’s this wild, crazy and wonderful atmosphere, where all these different people can come together for the weekend, and just let loose and wear cosplay,” said Stefan Latour, co-president of the Otakuthon convention for the past two years.

Let’s break it down for all you non-geeks out there. Otaku, pronounced “oh-tah-koo,” is the Urbandictionary slang used to describe hardcore anime fans. Latour explained that the word Otakuthon merges “otaku” with “marathon.”

The not-for-profit anime convention ran over the weekend of August 3 to 5. Located at Palais des Congrès, the event just celebrated its 13th edition, and has its roots at Concordia University.

Last year, Otakuthon peaked at 23,000 guests, and it’s only been growing, Latour said. Now they have Japanese music celebrities and icons coming to the annual event, local and international cosplayers, and artists to display their work. Their programs for the weekend are now jam packed with performances, panels, workshops, games and anime screenings.

The festival started as a passion project of the Otaku/Anime Club at Concordia in 2006. At the beginning it was a two day event organized by the club, Latour said. They organized activities and popped up some screenings, and since then it has expanded into what it is today. For its first two years it ran at Concordia, and for the next 11 it’s been held at Palais des Congrès.

Listed here are just a handful of the many events featured at the festival:

This space was massive. Colorful lights flashed everywhere in the darkness and hoards of people flocked to different game stations. There was a constant high pitched beeping sound of video games, and the DDR loudly played Korean girl band BlackPink’s music. It was like walking into a completely different world.

Sound Voltex resembled the video game Guitar Band, but was much more intense. There was a screen which displayed six columns that looked like the fingerboard of a guitar, and a keyboard-like device horizontal to the screen, with four buttons that light up in a fluorescent blue when you touch them.

The classic fighting video game Tekken was being played by gamers in the far right corner of the room. By the quality of the animation and the character designs it was obviously one of the older versions that was being played.

The Montreal Pokemon League was there too. They had a small space where people could either rent a DS for free or bring their own and play a game of one on one Pokémon. For every win, the winners were awarded with a sticker badge of the gym/location they played in.

Discussion Panel: Cosplaying as a Minority 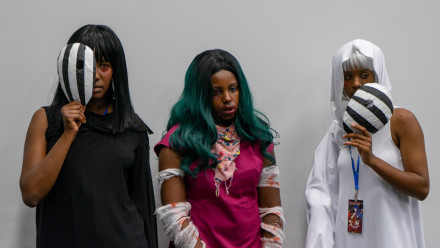 Participants were able to attend all sorts of panels, including a discussion on cosplaying as a minority. Photo Elisa Barbier

The first thing that was noticeably out of place was the guest speaker of the panel discussion for cosplaying as a minority. The choice of having a white woman as the only guest speaker was curious when the audience expected a person of colour. This was seen in the spectators’ reaction, as some walked in and out of the room in the middle of the conversation, once they noticed who was manning the event.

Though if they stayed to listen, they would have learned that the facilitator who goes by the name “Tassi” is hard of hearing. After the panel conversation, she explained to The Link that her colleague who is of Colombian descent couldn’t make it to the talk, which is why there were no visible minorities on the panel.

She conducted a healthy conversation about what it means to cosplay as minority, as best as she could. Tassi got a lot of help from audience members of which a good chunk was made up of people of color, as most of the conversation revolved around racial minorities.

The topic of actress Anna Diop being cast as light-orange creamsicle colored alien Starfire in the live readaption of DC comics’ Teen Titans was discussed as well.

There is a huge controversy around Diop’s casting, the problem seeming to stem from her identity as a Black woman, as she was berated with racial slurs on her social media accounts by disgruntled fans. Some audience members of this talk were mystified that her race was even an issue, seeing that she’s playing an extraterrestrial.

“People have their own fantasies of what a character should look like in real life,” explained Shari-Ann Webley, one of the spectators of the panel. If their favorite character is being portrayed by an actor or character design they didn’t expect, they feel entitled to not recognize them as worthy, simply because their look doesn’t fit the viewers’ envisioned image of them, she continued.

Tassi took the opportunity to bring up the topic of cosplaying as a visual minority.

That’s one thing about people of colour who cosplay; people complain that they’re not the perfect representation of that character, said Tassi. Though there are white people who play inverted characters or do crossplay, and no one talks about that. “They solely focus on race,” she continued.

Webley steered the conversation from race toward the representation of mental illness in media, as she brought up a video game called Hellblade. The game immerses the player in a simulation of psychosis, as the main character suffers from the disease and thinks she has a curse.

“I’m playing the game, and it’s such a turmoil because you’re trying to do something but there are these voices that are leading you the wrong way,” said Webley. It sends the message that this illness is real and is not a joke, she continued.

The conversation also delved into the topics of fat-shaming in cosplay and how cosplay photography could play into body discrimination. Though it was clear that something was missing with the lack of diversity on her team, which left the conversation incomplete and disappointing by the end of it.

Workshop: Kitsuke, The Art of Wearing a Kimono 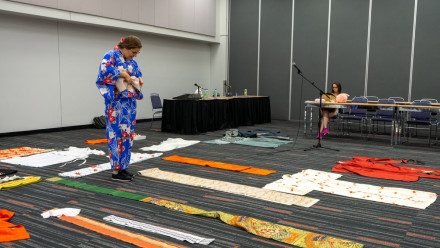 During the three day convention, people had the opportunity to learn about the traditions surrounding kimonos and how to wear them. Photo Elisa Barbier

Multiple pieces of cloth and kimonos were displayed on the ground for the workshop, neatly folded and tucked into place. Splashes of color and intricate patterns adorned the cloth for women; muted colors were reserved for the men.

People sat at tables that formed a square around the makeshift stage of empty space. There was a screen showing a powerpoint in the left hand corner of the room—though for the majority of the presentation it was empty, because of technical difficulties.

So, the speaker did most of her presentation of the different types of kimonos and other traditional japanese clothing by memory.

The speaker explained that a uchikake is worn as a wedding coat, lavish in hand embroidery, and is padded at the bottom of the clothing so that it creates a long train and makes the outfit look more full. It is worn as an overcoat, not as the base kimono.

Hikizuri are performance kimonos, she continued, picking up a garment full of colors. They are usually seen on geisha, for example. “The sleeves will be phenomenally long, embroidery will be gorgeous, and the bottom is also usually padded,” she said. “The sleeves will be longer than your ankles, depending on the performance or dance, and it’s usually more free moving.”

Holding up a navy blue piece of clothing called the haori , she showed the crowd the hip-length kimono-style jacket, saying that it is for men. She explained that it is worn as an overcoat, and some of the wealthy have intricate, colorful masterpieces sewn into the inside of the jacket, hidden from sight.

“All the gloriousness is on the inside,” she said, because of a law that was passed during the Edo period which banned anyone but those from the warrior caste to display their wealth.

She finished off the presentation with a demonstration of how to properly tie a bow on a yukata, which is a summer kimono made out of cotton. She put on the yukata in front of the crowd, and folded the light pink bow into existence, slowly, with expertise and patience.

For more information about Otakuthon and otaku things, visit http://otakuthon.com/2018/home/.