That’s what made up the first edition of the Hot Tramp music festival—the Diving Bell Social Club on St. Laurent Blvd. became a temporary home where womxn of the Montreal music scene were celebrated.

“I want to do music with a purpose,” said Cyber, one of the headliners on Aug. 29.

“I feel like it’s a gift when you have something like that, might as well use it [in] a good way,” she said. “I want to encourage women, encourage minorities because I’m a Black woman and it’s really been hard in the industry for me in Montreal in general.”

The festival is born out of Hot Tramp Management, a Montreal-based business that targets independent artists, founded by Sarah Armiento last spring. For artists starting out in the music industry, it may be challenging to find realistically affordable management companies.

“It does give people a platform that otherwise they wouldn’t [have],” said Armiento.

Armiento’s previous work and involvement within the city’s music scene led her to venture into entrepreneurship herself, building her own business from the ground up to bring forward artists in the fringes. 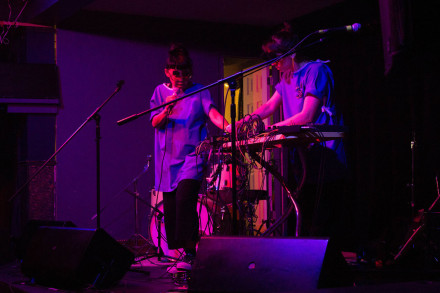 Thanya Iver, La Fièvre, and Tamayugé took the stage, alongside Cyber, each performing different styles and genres of music.

All the artists are hand-picked by Armiento.

“A lot of them I’m friends with, I’m surrounded by all these really talented artists all the time and I end up at these really great shows,” she said. “And if I see an artist I like, I have a list in mind of who I’d like to book.”

Performing third in the line-up was La Fièvre, a dark pop duo with electric energy on stage. The duo is a manifestation of saturday night fever, which is partly what inspired their name.

“I like the crazy part and the fun part about it. It’s the idea of losing control or being on the edge, and it’s something that you can find in our music,” said La Fièvre singer Zéa Beaulieu-April.

Her exaggerated moves on stage brought the songs to life. “I’m the freak show,” she said, jokingly.

With Beaulieu-April at the mic and Ma-Au Leclerc at the sound mixer board, the pair created an eerie sensation as they add an “experimental touch” to hip hop music.

“I like the crazy part and the fun part about it. It’s the idea of losing control or being on the edge, and it’s something that you can find in our music.” — Zéa Beaulieu-April

Beginning their musical creations either from the lyrics or the composition, both artists inspire one another to write their songs and build on each other’s work. Leclerc starts with the composition.

“I listen to a lot of pop music,” said Leclerc, which is where she gets her inspiration. Her goal is always to make people dance. Beaulieu-April, on the other hand, bases herself on emotion or feelings, making sure that she expresses her intended message.

Accompanied on stage by guitarist Nick Di Giovanni, Cyber let out her soft but powerful, melodic voice. In her silky black dress that exposed her back, she performed songs from her album.

Cyber has a background in gospel, singing in a church choir—she nurtured her love of singing and honed her skills over the years.

After travelling across Europe with her choir to perform in festivals and being a backup singer for Montreal artists like Dan Bigras, Cyber finally decided to fly solo. This was four years ago.

Now, she has released her first album, Equilibrium, reflecting on a dark time in her life.

“My first project was really hard for me to finish because I was going through such a deep depression […] I didn’t know what to do about it, I was just dealing with it. And I wrote all those songs which is my album now, Equilibrium,” she said.

This past summer, Cyber performed at the Pride Festival in Montreal. She said the invitation to such a big event was an achievement. It was her name that was front and centre as she took the stage as the main performer.

With varied expertise and experience within the music industry, all the acts were brought together for the Hot Tramp Festival.