Femme AM and The CJLO Women’s+ Collective

A collective for women and non-binary folks at CJLO, Concordia’s radio station, meets the need for community and support of femmes in broadcast media, complete with a feminist talk show.

Femme AM is a show happening twice a month on CJLO 1690 AM and its online platform, hosted by members of the CJLO Women’s+ Collective. The talk show airs on every second and fourth Friday of the month at 3 p.m.

Members of the collective are involved in broadcasting, programming, production, hosting, listening, and other arts. The collective also produces zines, like Scorned which was first published in October 2018 and will continue to be published this year. Planning is taking place and interested contributors can reach out to offer their help on their Facebook page.

CJLO program director and Women’s+ Collective member Allison O’Reilly said the collective met a need for more diversity at CJLO. “It felt like a dude’s place,” she said.“Around 25 per cent of programmers were women and it was hard for women to tap into it because it seemed intimidating.”

Stephen Beker, CJLO volunteer coordinator, said that he meets with new students weekly who are interested in participating at the station. “I use their passions as my compass to find out how these students see themselves contributing to the station,” Beker said.

“I love recommending the Women’s+ Collective to all because I see the effort and collaboration that goes into Femme AM. Their mission and their message are important, and I’m happy to be at a place where we encourage their expression. College radio is stereotypically viewed to be a boys’ club, but we live in a diverse world such that our community radio station should reflect that diversity.”

The topics discussed are decided collectively in focus groups in the collective’s monthly meetings. In the October episode “Female Monsters,” the hosts discussed witches, Medusa, and the succubus, and how these female monsters reflect cultural norms and fears in relation to gender. This was an interesting theme for Halloween, and a look into the gender dynamics behind the female monsters we often channel in our costumes.

Other notable episodes include “The 12 Nights of Clit-mas,” a discussion about women’s relationships with a little-discussed, very important part of a woman’s body and sexuality. The topics of self-stimulation, self-love, and orgasms come up in the episode in a comfortable group conversation.

The CJLO.com website has a show page for Femme AM where previous episodes are available, and a new website is being developed for the show. Previous episodes can be found on the CJLO Soundcloud page.

The idea for the collective was born from an observation O’Reilly made when she arrived as the program director, after having worked with other stations.

“Femme AM and the Women’s+ Collective provides a safe and welcome space where I can speak my mind, raise ideas and be part of a support network.”
— Allison O’Reilly

“The collective met a need for a welcoming women’s group to provide support,” O’Reilly said, adding that many men at CJLO were supportive about the Women’s+ Collective.

This includes Beker, who adds that he listens to Femme AM. “I’m proud that our station breaks the mold and that we support a show like Femme AM,” Beker said. “We need more discussions and dialogues that challenge the status quo and I’m fortunate that I get to listen to these regularly on-air.”

Through the collective, people who are just starting out and are maybe needing guidance and somewhere to start can do so in a community environment. More experienced programmers can find a community support network.

“Femme AM and the Women’s+ Collective provides a safe and welcome space where I can speak my mind, raise ideas and be part of a support network,” O’Reilly said. 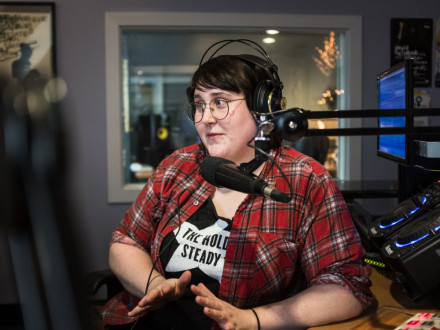 Allison O’Reilly during a recording of Femme AM. O’Reilly is a program director at CJLO and a member of the Women’s+ Collective. Photo Sarah Boumedda

Femme AM host and member of the collective Sophia Barsoski described hosting Femme AM as “a great opportunity to vocalize my thoughts on feminism and other topics in a safe, encouraging environment.”

“As a women’s studies and sexuality studies major, these topics come up in my classes and it’s great to explore them in more depth in a way that allows me to have more creative and artistic agency,” Barsoski said. “It makes me feel more productive and fulfilled to be able to turn the theory from classes into practice and more concrete action, through Femme AM and projects within the CJLO Women’s+ Collective.”

Barsoski also brought up the recent events at Concordia, including allegations of sexual misconduct in the creative writing program that rocked the administration as well as “events that pertain to the safety of women and sexual violence on campus.”

She said that “it’s great to come together as a group and share thoughts and feelings on these issues, relating to us as women and students. I’m lucky to be able to study something where we freely discuss sexual violence and safety on campus.”

“Not everyone feels comfortable sharing these topics in class and Femme AM can provide a refuge for students who need a feminist or creative outlet they may not find within their department,” she said.

“Participating in Femme AM made me more articulate in presenting my ideas and participating in discussions, since it’s a radio show where we have to present topics in a coherent, well-researched format,” Barsoski said. “There’s a great feeling of community, and outside of the radio show we’ve done events like Scorned Women’s night, where we meet up and discuss things we don’t feel we can necessarily share in other settings, that are bothering us or weighing us down.”

Barsoski adds that Scorned Women’s night later inspired the collective’s zine. The hosts in Femme AM discuss fascinating, sometimes sensitive but very interesting topics in a compelling and open way. They do not shy away from hard topics, and help unpack them with meaningful, femme-friendly discourse.

In the interest of transparency, April Tardif-Levesque broadcasts a weekly show on CJLO 1690 AM, though is not actively participating in the production of Femme AM or the Women’s+ Collective up until this time or at this time. Future involvement of the author in this organization is a possibility in the future.