On July 1, 2019, Esther Calixte-Bea’s heart was beating out of her chest as she posted the first picture of her photo series on Instagram.

A handmade lavender dress, the combination of mesh and satin, exposed her chest hair; the morning sun kissed her skin.

The response from her followers was unpredictable, which was distressing to say the least.

“I removed all my notifications, I turned [them] off so that I won’t receive anything because I was so stressed. I was so scared [about] how people were going to react so I wasn’t on it all day until night time.”

Lavender was born out of Calixte-Bea’s desire to let herself live freely without the constraints of unwanted constructs.

She created a “self-liberating” project, as she described it, exposing her chest hair in a brave, poised way all while embracing her femininity.

While some people unfollowed her page, Calixte-Bea explained that most of the comments were positive.

With divided opinions, the controversy was apparent. 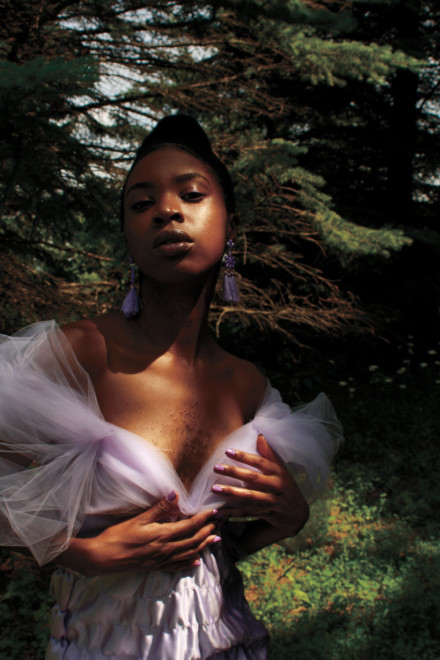 With ‘Lavender’, Calixte-Bea sought to break the taboo of women’s chest hair not just to her audience, but also to herself. Photo Courtesy Esther Calixte-Bea

Dorothy Mombrun, a follower of Calixte-Bea’s, was very supportive of Lavender —it led her to reflect on the constraints of imposed beauty standards.

“You being so unapologetic and proud of your body made me question my own perception of beauty and femininity,” said Mombrun in a message to Calixte-Bea.

“We often forget to look at ourselves and our role in the perpetual policing of the female body.”

“We internalize the expectations and impose it on others. When you posted your pictures, I realized how my first reflex was to think you should’ve kept the hair hidden. But after reflecting on it, I felt stupid for even thinking I had any say on what you should do with your body,” she continued.

Many similar comments came from women who appreciated her bravery and ability to be so vulnerable.

Lavender was shared by Calixte-Bea’s followers and exhibited in galleries as well as through online platforms.

Laetitia Duveau, co-founder of Berlin-based platform Curated by GIRLS, stated in an email, “Esther sent me her pictures and I was immediately blown away by her bravery and artistic talent! The way she is exposing her chest hair is very empowering! She is showing that body hair can be classy and beautiful. And that’s very important!”

The online platform features the work of emerging artists, and said that it focuses on “female-identifying creators.”

“As artists ourselves it was important,” she said, referring to herself and her friend with whom she began the platform.

“We all know how hard it can be to be heard [and/or] seen for young artists.”

Colourful and uncensored, the projects featured on Curated by GIRLS showcase the value of diversity with a feminist approach. “We celebrate femininity in all its shapes, forms and colours,” said Duveau.

“The platform shows girls, womxn, and non-binary individuals from all over the world, emerging talents who, through diverse mediums like photography, graphic design, music, fashion, express their experience, feelings, and diverse visions, freely!” she continued.

Calixte-Bea’s work fits with the general theme of expressing personal yet unconventional truths.

For her, the issue began in her early teenage years. She felt that her chest hair was a burden, an undesirable but undeniable part of her. “So when I was younger, I knew I had more hair than other girls.”

Boys and girls in sixth grade couldn’t shake the shocked expression off their faces when they found out that a girl…had…chest hair?

Despite trying to remove it many times and getting a bad skin reaction, Calixte-Bea said, “My body was just rejecting that, my body didn’t want me to remove it. I never hated it, but obviously I didn’t want it because I had never seen anyone else with that.”

Through her paintings of Black women, Calixte-Bea told the stories she could not verbalize. 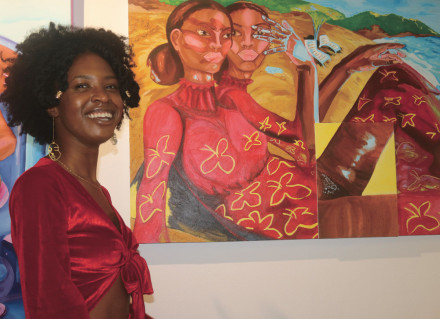 Calixte-Bea’s paintings tell the stories of Black women she could not verbalize. Photo Aysha White

The leading guideline of her work is beauty.

“There’s always that uniqueness in people that makes them beautiful, that’s what I like seeing. And confidence especially,” she said.

In museums and art exhibitions, she noticed that women’s bodies are very often painted with smooth and hairless skin.

Challenging that convention, she painted women with body hair such as those in her piece Taboo: The Hairy Woman, to normalize female body hair and change its usual negative perception.

Of course, the story was personal. It was obviously about her. But she kept denying it when asked.

“It was becoming really painful for me to always have to hide it,” she said, explaining that it even affected her modeling gigs when she told designers to she wouldn’t wear any clothes revealing her chest.

“I felt like that was stopping me from living in a sense, although it seemed so small, but it was really affecting me a lot. So I thought, ‘How can I free myself?’”

“I really wanted to get a conversation started. I feel like it’s one step but I had to really get out there and keep showing people that it is normal,” she said.

The lavender dress, completed in her fibers class, was the first one she ever made.

“I struggled like crazy,” she said, laughing. After carefully choosing the colour to capture the intended mood of her project, and the many trips to Fabricville before actually picking up the fabric, the dress came into being.

Equipped with a camera and tripod, Calixte-Bea went to a park near her house to take pictures on an early morning.

What would become Lavender took about three hours.

She posed in the grass and between trees, using her body language to convey the power and confidence of her message.

The project has inspired some of her followers to redefine their conceptions of attractiveness in relation to gender.

“I even questioned myself on why I thought chest hair attracted me in men but was not attractive on women,” said Mombrun.

Calixte-Bea has stepped out without hiding her chest hair a few times already and intends on continuing to do so.

“I want us to be able to live normally with that, because it is normal, in a society that has programmed us to think that it wasn’t.”