It was a cold mid-October day and CS Longueuil and FC Lanaudière were set to face-off in the last quarter-final game of the Première ligue de soccer du Québec competition, Coupe PLSQ. The score remained 1-1 and would force the match to go into extra time.

In the 108th minute, tied at one goal apiece, one could excuse Longueuil defender Daivy Makunza for walking off the field with tears in his eyes.

During the cup game on Oct. 14, Makunza was subject to a racist comment allegedly made by Lanaudière’s Alexis Solis. Solis stood over Makunza, when he allegedly called him a “dirty monkey.”

The day after the the quarter-final match, the Association Régionale de Soccer de Lanaudière, issued an official statement on the incident. The statement expressed that the club had zero tolerance for racism, and they suspended Solis—who was left unnamed in the statement—of all club activity.

Though his club left him unnamed in their statement, Makunza told The Link Solis was the player behind the insult.

The Link repeatedly reached out to Solis for comment, but without success.

The game was tense, the contact was hard and there were few fouls beings called on the referee’s end, said Makunza. The first time he dealt with Solis during the game, Makunza called for the referee to penalize him for a foul.

“[Solis] told me to ‘shut up’ repeatedly, so I told him to go f—- himself,” Makunza told The Link.

In an ensuing play, the two found themselves in a one-on-one battle where, according to Makunza, Solis committed a foul. Makunza then proceeded to make fun of Solis.

“That’s when he insulted me,” Makunza said.

Hearing what Solis allegedly said, Makunza turned to the referee, shouting for a red card to be given. Seeing a yellow card shown, Makunza showed his discontent to the referee “but he wanted none of it,” he told The Link in an email. Makunza then expressed his frustration to the players of colour on Lanaudière. He asked if they had accepted what their teammate said.

Turning his head, Makunza said when he made eye contact with Solis, rage came to him. Attempting to walk towards him, Makunza was held back. Walking back to the bench, Makunza explained to Longueuil head coach Anthony Rimasson what Solis said.

“The staff came to talk to me, to calm me down but I felt bad because I had the impression that nobody understood the gravity of the situation as fast as I did,” Makunza told The Link. “I then told them that I would leave the field and wouldn’t come back to finish the game.”

“My friends and family want me to resume football [but] I still haven’t made my decision. For the moment I do not wish [to return].” — Daivy Makunza

Makunza was asked to re-enter the game, to do it for the team, and to prove that he was the best on the field.

After shedding “tears of disgust,” Makunza played the last five minutes. When the game concluded, Makunza was “defeated”, said Rimasson. In the locker room, the team was saddened by what happened.

In the end, Makunza said he would never again step foot on a soccer field in Quebec. “My friends and family want me to resume football [but] I still haven’t made my decision,” he said. “For the moment I do not wish [to return].”

“We regret to not have left the field after the insult,” Said Rimasson “All of the players comforted Daivy [and] some excused themselves for not answering back.”

On Oct. 16, PLSQ commissioner Kambiz Ebadi was informed that a racist remark was made during the game, while news of the match also made its way across Facebook and Twitter. After receiving the referee’s reports the next morning, both clubs were contacted for their version of the incident. Once the league, and Ebadi received the necessary information, the disciplinary committee came to the ruling of sanctioning Solis for 15 games.

In the league’s statement announcing the suspension, they supported Lanaudière’s decision to leave Solis unnamed.

Ebadi said that the PLSQ’s decision making process goes through the disciplinary bylaws of the Fédération de soccer du Québec. The ruling, however, is not done by a provincial committee, said Ebadi, it is done by the league itself. In the PLSQ, said Ebadi, the first decision is made by the commissioner.

If a player wishes to appeal the ban, the decision will proceed to a disciplinary committee, which can be made up of three lawyers. In Solis’ case, no appeal was made.

Looking at the FIFA rules, continued Ebadi, the minimum punishment is five games, but the PLSQ decided to triple the sanction. Ebadi said, this was the maximum the league can give.

“Once we had [the information] we had no other option but to give it, and we were very comfortable to give such a sanction,” said Ebadi. “For us it’s unacceptable, and I already received calls from governors of our different clubs that they support the decision and they do not want to see such players in our league.”

Though Solis was banned for the last two PLSQ Cup games, and will serve the rest of his suspension in 2019, Rimasson expressed he isn’t satisfied with the sanction, and that the PLSQ’s decision was taken too quickly.

“The league only reacted after the comments on social media were made,” said Rimasson.

Rimasson said that Solis should have faced a “one or two year” sanction without soccer in any stadium.

“For me, kick him out of every league for one year minimum,” said Rimasson. 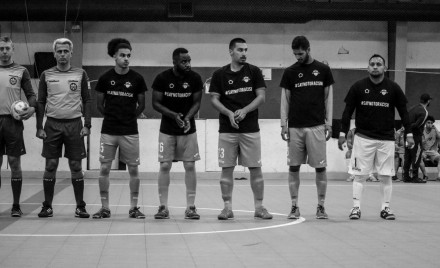 In the weeks following the event, Sporting Montreal and Lusitano Futsal Club paid tribute to Makunza with jerseys printed with the hashtag #saynotoracism. Photo Audrey Magny

In any case a second offence is made, Ebadi expressed that the suspension would “most probably [be] higher.”

Solis’ suspension only bans him from PLSQ games, Ebadi said that he can still play within other leagues in the province, such as the Reseau du sport étudiant du Québec.

“That’s the lack we have in our regulation,” said Ebadi. “You can be harder, but there’s a limit to that. In my position […] they do not have any place in the league, that’s for sure,” he continued.

The FSQ has made changes, in the sense that the PLSQ can ask for the FSQ to suspend players for racist conduct across all leagues, including varsity and the RSEQ.

“All the regulations are changing and it’s about a year that the committee of lawyers [have been] changing all the regulation […] racism has been touched and it’s coming with severe sanctions on it,” said Ebadi. “These changes are done, and normally they should be approved by our board of the [FSQ] in March.”

In the letter—in which Solis left himself nameless—he expressed his “profound regret over the situation” between him and Makunza, and that he accepted the 15 game sanction imposed on him by the league. Solis said that he will continue to advocate for this type of punishment towards racism.

“I too have been insulted in the past and insulted racially because of my origins. For this reason alone, I should have understood the seriousness of my actions,” continued the letter. “I can assure you that this kind of situation will never happen again on my part. I recognize my behavior and I will always regret my actions.”

Makunza felt Solis’ apology was forced, and that he felt pressured to do so. “If he was sincere,” said Makunza. “He would have not have waited for all this to happen to apologize.”

Following the release of the letter apologizing for the incident, Solis emailed Makunza, asking if he could verbally apologize for the insult.

“I wanted to call him at the beginning. I asked him for his number but later I learned that it was not the first time [that he made racist comments] so I dropped it,” said Makunza.

One week later, Sporting Montreal and Lusitano Futsal Club from the Première ligue de futsal du Québec, decided to pay tribute to Makunza. Prompted by Sporting Montreal, both clubs had jerseys made, across them wrote the hashtag #saynotoracism.

Makunza’s name was printed on the back of each jersey with another hashtag, #onestensemble. 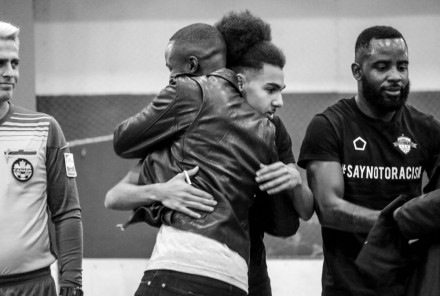 Makunza says he’s become a spokesperson for those affected by racism in spite of himself. He hopes to be able to change the mentality that people of colour are set aside or not on the same footing as white people. Photo Audrey Magny

Makunza said the support he’s received from both clubs has done him a lot of good. He was happy to see fans attend the game, touched by the message, and many who have been affected by racism have come forward to Makunza, telling him about their experiences.

“I have become, in spite of myself, their spokesperson,” said Makunza.

“It’s especially about changing the mentality that visible minorities, such as us Blacks, Indigenous people, and Northern Africans, are set aside and are not seen on the same footing as white people,” he continued. “It is this mentality that I want to change through my denunciation and actions.”

Sporting Montreal’s, Mohamed Farsi, who is Makunza’s teammate on Longueuil, approached Makunza about making an appearance before the match. According to Sporting Montreal president, Enrique Benevides, it was a “big yes” from Makunza.

“Having a team with so many players from different nationalities, when we first heard about it we were a bit shocked by what happened,” said Benevides. “We felt that we needed to do something as a club to send the right message to everyone.”

The jerseys will continue to be worn by the players in tournament and championship games, said Benevides. “We want to keep [this message] going all year and all season long,” he said.

Benevides added that he hoped to see the FSQ start a movement against racism, not something done by just a single team.