In a Jarry Park gazebo on a cool, bright Sunday, the Montreal branch of Canadian Roots Exchange’s Youth Reconciliation Initiative marked Orange Shirt Day with an intimate exchange around snacks and homemade soup.

Orange Shirt Day recognizes the harmful legacy of residential schools, the last of which closed only 23 years ago in 1996, and seeks to honour survivors of a system that existed in Canada for more than a century.

The event, held a day early to allow more to attend, was the first of six related to reconciliation between now and April.

“We need to keep the image fresh in everyone’s minds,” said Hank Phillips, who is Kanien’kehá:ka from Kahnawake, and the host of Country Weekend on K103.7 radio.

Phillips said some seem to think of injustices against Indigenous peoples as something that happened a long time ago, yet the last residential school closed the year after the 23-year-old was born. His community is still reeling.

It is estimated that 150,000 Métis, Inuit and First Nations children were taken from their families by the federal government and sent to the church-run boarding schools. Abuse was rampant, and Indigenous cultures and languages were systematically stripped away under a sweeping policy of assimilation.

Phillips laments that he is unable to speak his nation’s language.

“[The older generation] might have went through it, but we’re living with those traumas still,” said Jody Diabo, 26, also Kanien’kehá:ka from Kahnawake.

Diabo is one of nine volunteer YRI national youth leaders in Montreal. These Indigenous and non-Indigenous youth are united in their goal to advance reconciliation through dialogue. 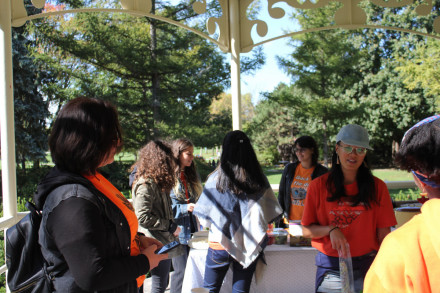 Orange Shirt Day recognizes the harmful legacy of residential schools, the last of which closed only 23 years ago in 1996. Photo Marcus Bankuti

Talking and being together is the most important thing, said Dona Nham, national program coordinator with the CRE. The event’s success is defined by its depth, not anything that can be measured by numbers, she said.

“It’s really about that bridge-building of, ‘I hear you. And I’m going to think about that,’” said Nham, who believes social and individual progress are linked.

“It’s really important to constantly evolve your worldview and to train that muscle of openness, because that is a muscle,” she said. “And I think that in colonialism and capitalism that muscle is atrophic.”

Nham used the occasion to ask her team one-by-one to reflect on what reconciliation means to them.

The recent climate march was on the minds of the youth leaders, both as a sign of hope and a painful reminder of marginalization.

“Greta said it herself, that we need to be including Indigenous people, that we’ve been speaking out on these issues for a long time,” said Diabo. “And it took a 16-year-old white girl for people to really pay attention to that.”

“Indigenous youth have been doing this for millenia, and they have not been on the front page,” said Nham.

Tasnim Rekik, 26, lives near Jarry Park, so when she saw the event on Facebook while it was already underway, she came immediately, little brother in tow.

“I really want to become more and more an ally and be in solidarity with [Indigenous people],” said Rekik. “For a few years I have really been learning to be the best ally I can be.”

She defined being an ally as “knowing where your place is, being behind Indigenous people or next to them, but never in front of them.”

Rekik felt welcomed by the youth leaders. “We spoke for an hour nonstop,” she said. They talked about the violence of residential schools but also communicated more broadly.

“We ended up speaking about everything that is related to Indigenous issues, as well as immigrant issues and racism,” Rekik added.

She felt it was important for her brother, a high school student, to attend.

“I see his textbooks, and there are so few things about Indigenous people. I’m always telling him what I know, but it’s not enough. For me it was the perfect opportunity for him. […] I think simply the contact was a good start for him.”

Education around Indigenous issues was even worse when she herself was a student, she said, noting her classes did not even broach the existence of residential schools.

“We’re just a footnote in their story,” said Diabo, referring to settlers and the scholars often favoured by them, “but an event like this gives us a chance to tell our perspective.”