Activities over the week featured a panel discussing climate change titled ‘‘If Not Now, When?’’, and the union ensured that everything from the reusable mugs at morning coffee to the agenda fit the theme of sustainability.

“There’s been more synergy,” said General Coordinator Chris Kalafatidis. “Usually [projects like the campaign and the agendas] don’t really touch each other and they’re overseen by different executives [who] don’t really talk to each other. An important priority for our team is working together, so that’s why we decided to pick a theme and to make sure it’s seen in all of our projects.”

They also planned a series of workshops similar to last year’s Get Radical workshop series, this time focusing on the topic of sustainability. 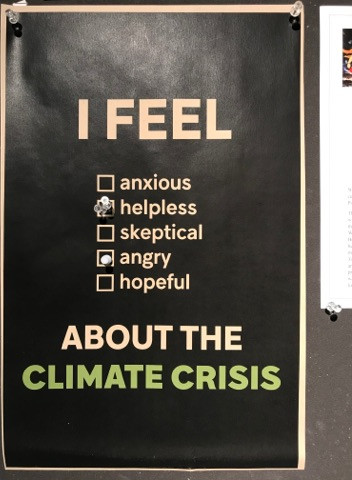 With this campaign, the CSU hopes to educate people and start a discussion on climate anxiety and the effects of climate change. Photo Ireland Compton

The workshops will be hosted every few weeks throughout the fall and winter semesters, and will touch on topics related to the climate emergency like living sustainably and taking action against climate change, online security, civil disobedience in social movements, and how to access funding for sustainability initiatives.

To Kalafatidis and External Affairs and Mobilization Coordinator Isaiah Joyner, this isn’t just an isolated sustainability campaign, but a greater change being made within the organization to become more sustainable on the whole rather than one isolated campaign.

The CSU has been working in conjunction with other sustainability groups on campus to build on what it has to offer.

“We have all of these great organizations already existing on campus who have been doing this work long before us, so to try and do it on our own would be a wasted opportunity,” said Kalifatidis.

Kalafatidis cites Waste Not, Want Not as one of the most collaborative campus sustainability groups thus far. He says that the CSU has recently signed an agreement with the group which will ensure the project’s longevity after the graduation of the person currently overseeing it.

“Normally the campaign launch would happen a little later but getting it in orientation was kind of the sweet spot for both communications and pushing out to the people because it’s inclusive and shows a sense of unity among the different activities,” explained Joyner.

With this campaign and the shift towards sustainability within the CSU itself, Joyner and the rest of the committee wanted to educate people and start a discussion on climate anxiety and the effects of climate change, and make it known that every action counts.

Climate change is rapidly taking effect, driven by human impact, and Canada’s climate is warming. What people may fail to realize is that they can make small changes to have a positive impact, explained Joyner.

“People feel their impacts are minimal. Like ‘If I start composting at home, it doesn’t save the world.’ But we can’t afford to have that mentality,” he said.

The union hopes to continue its support of climate change initiatives by working actively with existing organizations on campus, like Sustainable Concordia, the Concordia University Centre for Creative Reuse, and Waste Not, Want Not.

Moving forward, the CSU will be taking part in the Sept. 27 planned for Montreal. The march is organized by #FridaysforFuture, a movement that has emerged worldwide in response to a call from young climate activist Greta Thunberg.