In the wake of Kobe and Gianna Bryant’s tragic death Sunday morning, the Concordia Stingers and Bishop’s University Gaiters ran out the shot clock to honor the NBA legend.

With the crowd cheering, the teams paid homage to both of Bryant’s jersey numbers, 8 and 24. The Gaiters kept the ball for 24 seconds on their first possession then the Stingers followed with an eight second backcourt violation.

The stage was set, but only one team rehearsed the play last night, as the Stingers caught fire right off the bat. With team leader Olivier Simon scoring the first points of the game, Concordia’s offense was in sync and efficient.

Shooting 13/18 from the floor in the first quarter, the Stingers dominated the opening frame with quick ball movement and good team basketball.

After a smooth stutter dribble pull up just outside the elbow at 5:18 in the first quarter from freshman guard Sami Jahan, the Stingers led 12-6. Building on his 28-point performance at McGill last Saturday, Jahan put up another strong performance, scoring 14 points and grabbing 10 rebounds.

Head coach Rastko Popovic knows his young floor general is learning fast and is confident that his talent will continue to show.

“I love the kid, he’s fearless,” Popovic said after the game. “Sometimes, he just has to learn. He made some mistakes today by taking quick shots but that’s part of the learning process as a rookie.”

“We’re gonna show him on tape tomorrow, what was good and what could be done better and I think that will only help him because he’s gonna be pretty good,” he finished.

As the first quarter came to a close, the Stingers had a comfortable 29-14 lead. It seemed like the Gaiters would be routed out the gym, but in basketball, you play until the clock hits zero.

The Gaiters outscored Concordia 20-12 in the second quarter and slowly started to gain momentum.

Behind junior guard Nervens Demosthene and forward Jordan Thornhill, the Gaiters trimmed Concordia’s lead to five in the second quarter at just under one minute left in the half. Demosthene finished with a team-high 22 points.

Though Concordia let Bishop’s crawl their way back into the contest, Aleks Simeunovic made sure the Stingers kept a seven point cushion heading into the break, up 41-34. Simeunovic’s sharp shooting and timely buckets wowed the spectators. But, he says it’s all about teamwork.

“My teammates were able to find me when I’m open. Them believing in me, just gives me the most confidence and coach is telling me to shoot the ball,” he said. “ So when I get it, I don’t really have to think twice about it and then from there I just gotta make the shot.”

In the locker room, Popovic urged his team to bring back the same intensity they played with in the first quarter. They answered his call in the third quarter and most importantly got their fourth-year forward Simon to own the post, scoring 34 total points in the game. 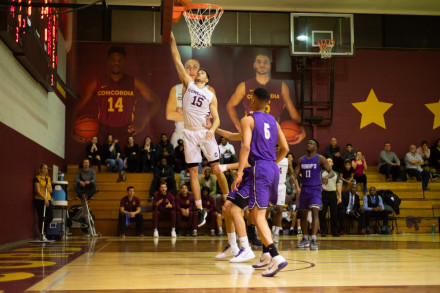 “I called out Olivier at halftime. I told him as a leader of our team you have to be better. It’s unacceptable to have four points in the first half when you could have had 20 at the half. I felt like he should have 50 points today,” Popovic said.

Simon was just 16 points shy of that target. The Stingers were able to get him the ball deep in the paint, where he looked like a man among boys. Concordia held a 69-55 lead heading into the fourth and for Simon, the key was sticking to the basics.

“We just looked at each other and we were like, let’s go, let’s do it,” he said. “So I think we took the challenge on ourselves to just be better and that’s it. We attacked their defense […] and we just slowed down the tempo and just made what we knew was the best for us.”

In the fourth quarter, Bishop’s continued to cut down the lead, down 78-70 with four minutes left. But with their big man Thornhill fouled out, Concordia took advantage and finally ran away with the victory at home.

Concordia now looks to stay perfect against Bishop’s this season, as both teams rematch tomorrow in Sherbrooke at 8 p.m.

For Jahan, these points are crucial but it won’t stop the players from taking their minds off their goal.