“We recognized our mistakes, like we know we should have blown out this team. It’s a win but it’s not like a big win,” said guard Sami Jahan.

There’s a reason the Stingers freshman feels this way. The Rouge et Or—who suffered a 31 point loss to Concordia Thursday night—currently sit at the bottom of the Réseau du Sport Étudiant du Québec Standings. The Stingers on the other hand, are in a hunt for first place and another title.

But, playing the same team twice in a week can be difficult, and sometimes not very pretty—which was the case Saturday afternoon at the John Dore gymnasium.

Bodies flew and emotions ran high, as both teams struggled to build good rhythm early on in the game. However, one thing that stayed constant was Concordia’s lead.

After Jahan knocked down a jumper at the 7:19 mark of the first quarter to put his team up 5-4, the Stingers never trailed in the game. The freshman finished with 24 points, four assists and a rebound shy of a double-double in 36 minutes.

With the Stingers still battling injuries, Jahan continues to tear up the RSEQ since his insertion into the starting lineup.

At the end of the second quarter Jahan heaved the ball from half court, draining an unbelievable buzzer beater to close the half with the score at 39-35 for the Stingers.

He says it felt ordinary, since the focus was on putting Laval away early, who stayed resilient and hung on all game.

“It was whatever. I didn’t really get too excited. It was a fluky shot […] That’s like one of a thousand type shots,” he said. 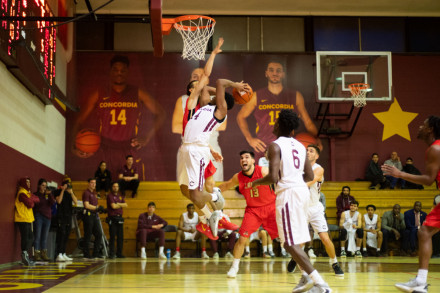 Le Rouge et Or’s tough competitive spirit was spearheaded by their fourth-year veteran guard Vladimir Thomas. He came off the bench sizzling in the first, scoring 14 points, looking like a threat on every possession down the floor. Thomas finished with a game-high 28 points, while first-year guard Steeve Joseph added 19 of his own.

In the third quarter, Concordia began to pull away. They led 57-46 with just under 2:11 left and had all the momentum heading into the last frame. But in tight games, turnovers become costly and for stingers guard Oge Nwoko, this area was not well executed.

“Because we just came off of a blowout, our goal was to not play down to their level,” said Nwoko who scored a game-high 21 points Thursday night. “But it didn’t kinda go that, we had more turnovers. Even though we won the game, we took a step back in that sense.”

While Concordia’s 21 turnovers kept Laval in striking range, in the fourth quarter, le Rouge et Or erased a 17-point deficit to just five points with a 1:01 left in the game. They were down 81-76.

A pair of free throws from Nwoko and Jahan pushed the Stingers lead to nine and, shocking the crowd, Laval’s Nicolas Desjardins drilled a three quarter buzzer beating shot to end the game at 86-81.

With the win, Concordia’s showdown this Saturday vs McGill at 4 p.m. at home sets up more than just a historical crosstown rivalry.

The winner will leave the court hoisting the Lengvari Cup—a tradition dedicated to honour George Lengvari who donates to both programs by offering scholarships and awards to outstanding student athletes— which Concordia will look to defend.

Stingers head coach Rastko Popovic has been here before. He says it’s all about preparation.

“It’s a signature game here for Concordia,” he said. “We have a big reception after the game next weekend. It’s a big game, it’s a fun moment for the athletes to enjoy, playing for a cup. …[We’re gonna] try to get our guys ready for that big game Saturday.