The Concordia Stingers looked much sharper against the Université de Québec à Montréal Citadins than they did when they narrowly squeaked by them less than 48 hours before.

After beating the Citadins in overtime on their home floor Thursday night, the Stingers looked much more polished in their meeting this Saturday at the Concordia gym.

“It was important to follow the scouting report this time because we didn’t do that Thursday, we were terrible,” said Concordia winger Ken Beaulieu. “It was really important today to get back on track and execute properly.”

Forwards Schneider Suffrard and Ken Beaulieu were again the main catalysts for the Stingers. Beaulieu’s 13 rebounds were a game-high, and he just missed recording a double-double as he scored nine points. He added a team-high five assists to his line.

Suffrard scored a game-high 21 points and grabbed four rebounds in his 29 minutes on the floor. 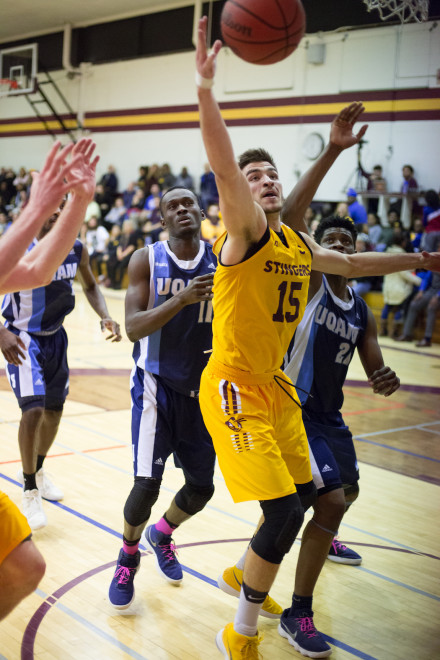 “They are aggressive and a defensively disciplined team so I tried to match their aggression,” said Suffrard. “We had a lot of mismatches so I just decided to take advantages of those.”

Citadins guard Christopher Adu led his team with 19 points and ten rebounds with the assistance of Jeffrey Avril, who added 12 points, five rebounds and six assists for himself alone. Despite that, the Stingers held big leads throughout the entirety of the game, and the Citadins never made up any of that ground.

“Sometimes we rush too much and we’re not patient enough,” said Beaulieu. “We must be patient with the ball and make the right plays.”

It was an important win for the Maroon and Gold. Stingers head coach Rastko Popovic admitted that some of his players played well at times but he wasn’t completely pleased with the way the whole game was played and believes there could be improvements to be made.

“I thought Schneiders was fantastic in the second half where he actually came in and dominated the game in the third quarter and that changed our game,” said Popovic.

“I’m displeased with our turnovers, 20-plus turnovers, that’s ridiculous,” he continued. “We gave up 18 Offensive rebounds again, totally unacceptable so we just go through these phases where we play so well, then we stop.”

The Réseau du sport étudiant du Québec’s second-ranked team will have a week to rest and prepare for a clash with top-ranked McGill at home.

“When you come to practice, like I tell them, you have to come ready,” said Popovic. “You have to be prepared for McGill next week because it’s a big game.”