Stingers Connect on All Cylinders With Four Starters in Double Figures

“Last year we didn’t get one in this building, […] so when we come against UQAM, there’s no love lost—like, it’s time to grind,” said guard Adrian Armstrong.

Dropping both away games to UQAM last season, the Stingers headed into Saturday night’s game well prepared, walking out of the Centre sportif with a victory and, most importantly, revenge.

With the first bucket coming more than two minutes into the game at the 7:39 mark from Concordia’s Olivier Simon, the maroon and gold looked like the more poised team. Shooting a dismal 22.2 per cent from the field, going four for 18, UQAM gave their fans little to cheer about, as the more they missed, the more the Stingers started to find their groove.

“I just thought […] the first few minutes, we couldn’t really score, but I thought we got a bunch of good looks,” said head coach Rastko Popovic about the first quarter. “And that’s what I told our guys—those shots will start dropping. I commended our guys on our execution offensively; we looked good offensively tonight.”

Though defence is the name of the game, Concordia’s offence was nothing short of dominant. They headed into the second frame 17-11, and established the momentum for the rest of the game, showing what it looks like to be defending champions.

“Our guys shared the ball, made the right play. We made the extra pass, guys were unselfish, and it just looks pretty. Pretty basketball, and that’s how basketball is supposed to be played. That’s what we try to teach our guys every day,” said Popovic.

The second quarter felt like the typical Citadins-Stingers rivalry we’ve become accustomed to witnessing over the last year. As Concordia was able to neutralize go-to forward Alix Lochard, who only scored six points in the half, UQAM relied heavily on forward Frantson Demosthene to get them going. 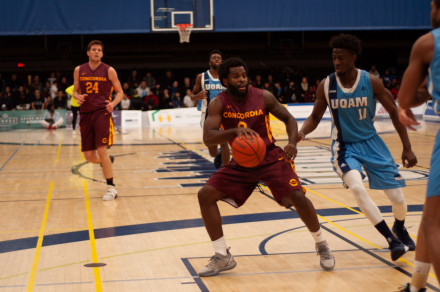 Demosthene finished the game with a team-high 22 points. With les Citadins scoring 17 points in the quarter, the home side seemed to have more life as they closed the gap to 26-25 at the 3:37 mark.

But behind Armstrong’s timely buckets and breakthrough performance with a game-high 25 points, the Stingers headed into the half up 32-28. The fifth-year player has struggled finding his usual offensive explosiveness, but last night he flipped the script.

“I mean, you try to get as much movement as possible, ball movement, off-ball movement, and coach sets it up so we have three, four options at all times,” said Armstrong. “So as long as were patient and we’re willing to make the extra pass, offence looks good and we execute and we get open shots.”

Building a 10-point lead, with the score at 46-36 by the 3:10 mark of the third, the Stingers had no problem exposing UQAM’s struggles to contain their offence. Concordia shot 60 per cent from the field in the quarter and crushed any hope of a comeback for their opponents.

Stingers forward Olivier Simon, 6’7”, who was a nightmare all game in the paint, finished with 14 points and was a rebound shy of a double-double. He said there’s a special feeling winning in this gym.

“This one is big because it’s never easy to win here in UQAM,” he said. “I mean the crowd is always big. They always hype them up. It’s always a big atmosphere, so I think it’s a good way to end 2019.” 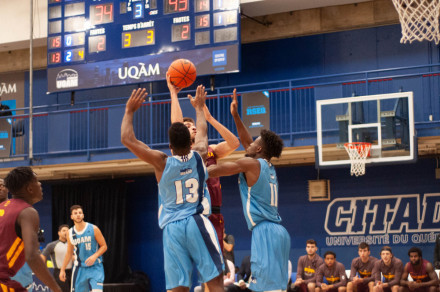 Never trailing in the game, the Stingers also benefited from forward Sami Ghandour’s double-double, scoring 15 points and grabbing 12 rebounds, and guard Cedrick Coriolan’s 10 points. He shot 40 per cent and went two of five from the three.

With four starters in double figures, the Stingers played a complete game on both sides of the ball; their notable hustle plays and hands-on defence may seem to be overshadowed by their synchronized offensive play, but Popovic knows which players make a difference.

“You need a guy like Oge, you know. He only had four points, but I thought he was instrumental in making the right play—[he had] three steals and had big time deflections […] and, it’s just, we played like a unit tonight,” said Popovic about Nwoko, a third-year guard.

Holding their largest lead of the game in the fourth at 6:59, up 65-48, the Stingers let a late 7-0 Citadin surge ignite the crowd. But it was too little, too late. The game ended 73-61 and Concordia successfully bounced back from a tough loss to McGill on the road. Popovic said he challenged his starters and they really responded well.

Now at 4-1, Concordia heads into the break second in the Réseau du sport étudiant du Québec standings. UQAM, on the other hand, falls to 2-3 and are still looking for their first victory against the Stingers since Feb. 2, 2019. Both teams are back in action next month, at UQAM, on Jan. 8.

The matchup should be another much anticipated meeting between the two teams, but for now, Popovic is making sure his players have their minds in a more important space.

“Now they got a week off to focus on exams,” he said.

“As a coach, my role is not just to be their basketball coach. It’s to guide them in life, get them ready for real life after basketball, and I think days like today showed that when they do things right, good things happen.”