There was an air of urgency about the Stingers during their win against the Université du Québec à Montreal Citadins on Saturday.

Concordia found themselves in trouble early on as their opponents raced to an 8-1 lead. Surprisingly, head Coach Tenicha Gittens opted not to call a timeout.

“They know what they got to do. I can’t always just be saving them. They got to be able to play through some things and figure it out,” said Gittens.

Gittens’ decision paid off and the Stingers found their footing. Fourth-year guard Caroline Task scored eight straight points to end the quarter and bring her team within two at 15-13.

In the second frame, the Stingers found success playing through Telesford as UQAM lacked the right combination of size and speed to keep up with her.

Telesford pressured UQAM’s interior defence by repeatedly posting up or attacking the rim as a roller in pick and rolls with guard Myriam Leclerc, who finished the game with 11 assists.

Despite UQAM’s 6’5” center Inga Aleksaite towering over the 6’1” Telesford, she was not light-footed enough to keep up with the Stingers. Aleksaite picked up two quick fouls in the first and did not leave the bench for most of the second quarter, playing just one minute.

“They had at one point the tallest girl was maybe 5’8”. I just knew it was my time to put in the work,” said Telesford.

Telesford scored 13 points, went three of five from the field and shot seven of nine from the free throw in just seven minutes to push the Stingers to a 40-28 lead at the half and finished the game with a career-high 23 points.

Telesford looked sharper and more agile than she has since joining the team from NCAA Div 1 Oakland University, something she credits to acclimating better to her new league and having some time off. 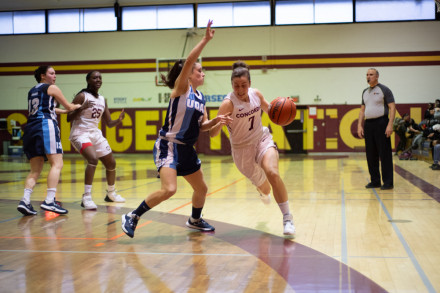 “We [had] all of December off. [It] was amazing to have that break and to get my body back where it needed to be so then I can be the powerful player that I know that I am,” said Telesford.

The third quarter is a problem the Stingers are still trying to solve. This season, the team has often come out of the half flat and struggled to regain momentum leading to big point swings.

Concordia have outscored opponents by slim margins in the first and fourth quarters and been outscored by just two points in the second.

In the third however, the Stingers have been outscored by 20 points.

The Stingers managed to keep even this time, battling their way to a 15-15 quarter. Task scored 10 of the Stingers 15 points, including a buzzer beating layup to end the quarter that had the crowd jumping out of their seats.

She finished with a game-high 26 points and was all smiles after the game.

“It feels really good. I had a really rough one at UQAM on Wednesday, so it just feels good to be back in my groove and do my thing and feel confident on the court again,” Task said.

The Stingers withstood a late eight-point flurry from fourth-year UQAM forward Véronique Boivin to finish the game up 71-54. Boivin finished with a team-high 19 points.

Gaudy offensive stats from Task and Telesford will pop off the box score but both players acknowledged the role of the entire team in securing the win.

“I’m nothing without my teammates, as you know I only score layups and free throws. I need other people in order to get me the ball,” said Telesford with a laugh.

“I’m not someone that’s going to bring it up 94 feet […] We’re very big on sharing the ball and giving up the good shot for the great shot.”

“We came out strong and we were together. Every defensive possession there [was] always talking and that’s really important,” said Task.

The Stingers improve to 3-4 on the season and will be looking to carry the momentum from yesterday’s game with them when McGill visits on Sat., Jan. 23 at 6 p.m