Despite missing two offensive leaders and their starting goalie, the Stingers rallied to defeat the Royal Military College of Canada 6-4 on Sunday afternoon at the Ed Meagher Arena.

After a disappointing and emotional loss the previous night against rivals McGill, Concordia needed to bounce back and have a strong game against RMC.

Zachary Zorn opened the scoring with a power-play goal in the first minute of the game. Forwards Jean-Philippe Beaulieu, Marshall Wilton and Jeff de Wit added a goal each, while defenseman Bradley Lalonde pitched in two tallies to bring the total to six goals on the day.

“We had to forget about last night as quick as possible and focus on today’s game,” coach Marc-André Élement said. “It was a huge two points we needed to get and the guys played well.”

Their team was able to step up in their absence and break out their most impressive offensive performance of the season.

“The guys who stepped in for Katerinakis and [Sanche] really did a good job for us,” Lalonde said. “As a five-man unit, we were getting good looks and capitalizing, which is why we won.”

Second-year goalie Sébastien Lefebvre, who is third on the goaltending depth chart for Concordia, seized his chance today and recorded his first win as a Stinger. 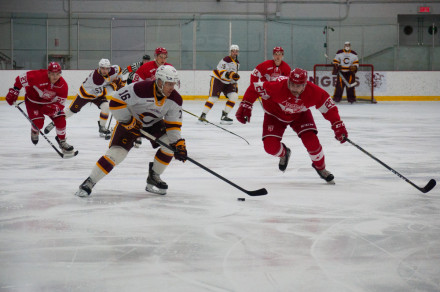 “I’m very happy for the win, even though I feel like I could’ve been better,” Lefebvre said. “But I’m glad my teammates were there to help me and fill the net on the other end.”

One reason behind the Stingers’ success on offence was their proficiency on the power-play. They capitalized on three of eight opportunities on the man advantage, setting the tone for a high-scoring game.

“It’s huge that our power-play was clicking today, especially because we haven’t scored much yet this season,” Stingers forward Tyler Hylland said. “You have to make the other team pay for taking penalties, and that’s what we did today.”

The Stingers’ defence helped carry some of the weight on offence, with Bradley Lalonde contributing two goals and Gabriel Bilodeau, Carl Neill, Alexandre Gosselin and Pascal Corbeil also finding their way onto the scoresheet.

“My game is about getting shots on net and maybe creating some rebound opportunities for the forwards,” Lalonde said. “That’s kind of how we play, getting pucks on net and we know good things will follow.”

“We knew their goalie was good because he beat us a couple of times in the past,” Élement said. “We had to put a lot of shots on net to make him uncomfortable and get some past him.”

The Stingers now turn their attention to the red-hot Université du Québec à Trois-Rivières Patriotes, who are riding a six-game winning streak and sit right above Concordia in second place in the East division.