On the paper parachutes, a text stated that “Concordia Against Tribunals (CATs) denounces the University’s payment of $235,000 to the outgoing Chief Financial Officer,” in reference to the severance package former CFO Sonia Trudel received for less than three months of work last semester.

The costs of a substantial payout like Trudel’s falls onto the greater Concordia community through taxes and tuition, according to Eamon Toohey, the spokesperson for the group CATs.

The demonstration occurred at around 10 a.m., as one masked student greeted the morning commuters using a megaphone, while his peers dropped the parachutes. Students watched and took pictures, as security quickly took down the banner and swept away the paper.

Concordia admin eventually became co-complainants alongside the professors and have on separate occasions attempted to reach an informal resolution between the students and professors, spending approximately $27,000 on one mediator. Toohey said the senior administrators are focusing too much on their own needs.

— Video by Concordia Against Tribunals

“It’s all a part of the same disregard for the students and greater community,” he said.

In an interview on Feb. 5, university President Alan Shepard said it’s “always money well spent when you try to bring the community together,” regarding the cost of mediation.

“What we were trying to do was find a peaceful way where both sides felt heard,” he explained. “Mediation works sometimes, sometimes it doesn’t—we tried.”

Demands CATs have made against the university include dropping all charges and providing mental health support for the students who have had to balance school, work, and preparing for mediation and tribunals last semester. 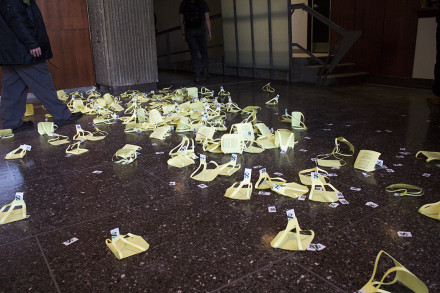 On the paper parachutes, a text stated that “Concordia Against Tribunals (CATs) denounces the University’s payment of $235,000 to the outgoing Chief Financial Officer.” Photo Jonathan Caragay-Cook

Shepard, in the same interview, reiterated his stance that the university’s formal code of complaints is an independent process anyone can use, and that he can’t as president erase charges.

“We have good mental health services that are available for anyone in the community,” he further commented on the demands.

Following the first tribunal in December, eight students received a letter of reprimand, which is the most lenient form of consequence. Seventeen students are awaiting a decision from a second tribunal that took place last week, while a third tribunal for the last professor and set of students seems like it’s no longer happening.

Even though no future demonstration has been set yet, Toohey said CATs will continue its mandate to fight against tribunals for student-protesters.