Shrieking sneakers and thundering basketballs filled the halls of Champlain College in St-Lambert, Quebec, as athletes, volunteers, and community members congregated to raise money and awareness for the Rohingya people of Myanmar.

Posters clung to walls near the gym and advertised the event’s title, Buckets for Burma.

Entering the gym, one observed groups of men wearing black or white uniforms embossed with the South Shore Muslim Youth (SSMY) logo–a towering mosque with crescent moons displayed at the top of the emblem.

The SSMY is a community group whose members share interests in sports, faith, and popular culture, and regularly organize events including Buckets for Burma.

After 2 p.m., the teams paused for prayer and speeches while they waited for the playoff rounds to begin.

At the event, sports dominated the discussions of event attendees, and conversations ranged from NBA player Lebron James to the upcoming Ultimate Fighting Championship fight between Connor McGregor and Donald Cerrone.

Arssal Shahabuddin, who played on the team, Blouses, credits the tournament’s unique character to its Islamic foundation. Specifically, Arsaal suggests, “You’ll notice that there is no swearing, right? If you cuss somebody out, it’s not worth it to give up your dignity and your honor just for basketball.”

In addition to its absence of verbal aggression, the tournament’s Islamic foundation plays a role in its charitable focus.

Examining the SSMY’s choice to help the Rohingya people, event organizer Nauman Mirza says that he would organize an event that aids any worthy cause, not just ethnic groups such as the Muslim Rohingya people.

“All we can do right now is […] to bring awareness, not necessary to us, but to the world as well.” Nauman Mirza

In Myanmar, state authorities continually persecute the Rohingya people through violent crackdowns that, according to the United Nations in 2017, include “mass gang-rape, killings – including of babies and young children, brutal beatings, disappearances and other serious human rights violations.”

As a result, many Rohingya people flee to surrounding countries for refuge. In Bangladesh, the Rohingya refugees face impossible predicaments and commonly find themselves left without healthcare, food, and education.

These conditions resonate with Buckets for Burma organizers, especially Atif Godil, who spoke to participants during the break that preceded the tournament’s playoff round.

During his time with the Rohingya people, Godil says he focused on doing what he could, including helping people receive health care. 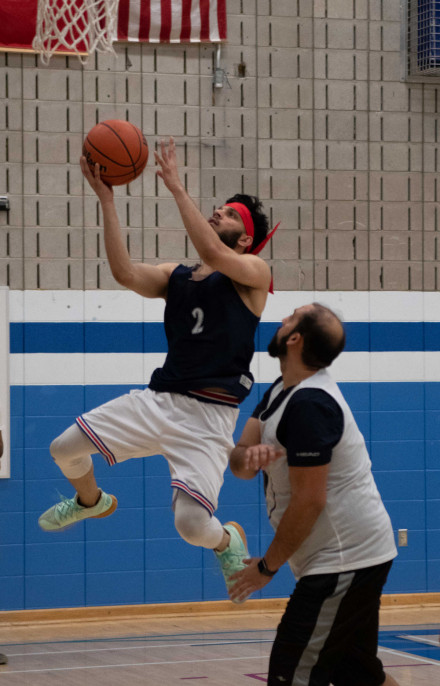 Through the love of basketball, the athletes look to help a community in need. Photo Esteban Cuevas

Buckets for Burma has a similar focus, and they strive to raise money through a GoFundMe campaign. The money raised in the GoFundMe campaign earmarks for the OBAT Canada charity, which aims to provide operating shelters, medical clinics, community centers, and learning centers for Rohingya refugees in Bangladesh.

While the funds raised through the tournament will help the Rohingya people, Mirza stresses the importance of awareness.

“All we can do right now is […] to bring awareness, not necessary to us, but to the world as well.”

Acknowledging the value of the tournament, volunteer, Shoaib-Hasan, a Master of Arts student at McGill University who studies refugee integration into new countries questions if they can do more.

“We don’t have any refugees here today […] so that begs the question […] is it just locals who come to these events and raise funds? So, they’re helping that way [with donations and awareness], but maybe there is a better way to involve refugees.”

With room to grow, the tournament finishes with an intense matchup between Brotherhood and Blouses. Brotherhood won the game and huddled for a group photo as they brandished their championship medals.

While sports institutions evoke and enforce many societal problems, one can’t help but admire the community bonds exhibited during the event. A group of people, who largely seem like friends, convened to combine their passions and raise money for people in need.