Amidst ongoing gentrification in Parc-Extension, community organization Brique par brique held a discussion on Nov. 9 on how infrastructure can lead to positive social change.

After an overview of steps Brique par brique has taken so far, Faiz Abhuani, its director, moderated a roundtable discussion in the early afternoon.

The three guest speakers, all from outside Parc-Extension—some from outside the country—brought perspectives from their own communities to discuss potential solutions to gentrification in the Montreal neighbourhood.

A third generation West Oaklander herself, Session said her education in anthropology and experience as the daughter of small business owners helped her see the changes in her neighbourhood.

As the San Francisco Bay Area, which includes Oakland, has gentrified, it has become unaffordable for nearly all but the most wealthy. Many homeless people, who live in their cars or tents, have regular employment.

Running in a 2016 municipal election helped Session realise that economic justice in her community would come only with a cooperative economy. 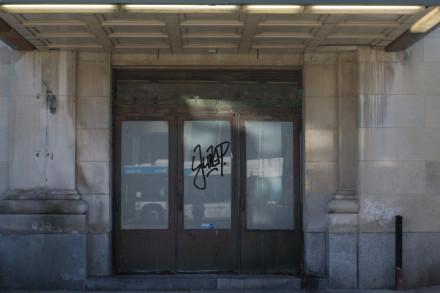 Parc-Extension’s ongoing gentrification has made living in the neighbourhood unaffordable for many residents. Photo Erika Morris

“What I realised is that collective economic action was the answer,” she said.

While discussing solutions, Session mentioned housing as a human right, saying rights had been commodified in part because of the language used to describe them.

Terms like “value” are loaded, and using them to describe housing shifts the discussion from guaranteeing housing to a market-oriented approach.

She also said vast changes in the functioning of the economy had completely transformed cities. At first, the inner core of cities were seen unfavourably when compared to the suburbs. As such, prices in neighbourhoods close to the city core would be cheaper when compared to living farther away from the inner core.

But now, “What you see in our cities is a process of reverse urbanization,” said Session.

“Now with the shifting of the economy, the urban core has become a valuable place,” she continued. “These bodies, these communities, these people, you and I, are less able to participate as valued producers in this economic transformation and are, once again, being moved to these less valued spaces.”

Bochra Manaï, general coordinator for Parole d’exclues, a collective action group in Montreal North, discussed her experiences in a neighbourhood that, while not gentrifying at the same rate as other boroughs on the island, still faces multiple housing problems, some of which are very similar to Parc-Ex’s.

She related the current situation in Montreal and around North America to her experience in France.

“I grew up in these spaces that we call ‘les banlieues,’ which are very, very numerous in France,” said Manaï.

“One of the things that frustrated me the most was the lack of alliances between these territories, even if they often faced the same challenges of housing or xenophobia,” said Manaï.

She observed the same phenomenon in North America, too. In Montreal, she saw language as one barrier to these alliances. Manaï stressed the importance of translation to reach out to the most people.

“We can’t just function in Montreal in English or French,” she said.

“We need to think about everyone. That doesn’t mean speaking 100 languages, but it does mean having dialects to be able to communicate effectively.”

Melissa Goldstein, the third speaker, is a researcher and organizer for the Parkdale Neighbourhood Land Trust in Toronto. Parkdale, as described by Goldstein, is rapidly gentrifying because of the split between very wealthy residents and more economically precarious ones.

Goldstein commented on how organizations often need a long time to build up their credibility before being able to do anything.

“What these organizations need to do anything is trust,” added Goldstein.

She also said that knowing how the system works in terms of housing laws and governments was also extremely helpful.

“When you know what happens, you can see that some of the time it isn’t the whole system that’s against you, it’s one person making a decision that ends up hurting your cause,” she said.

“That’s weirdly a good thing, because you see that it isn’t the whole thing against you, it’s literally one person making a decision.”

Nevertheless, the discussion kept coming back to systemic problems when it comes to affordable housing. What does affordable mean? And what about the relationship between the city of Montreal being committed to social housing and the taxes they get from high property values? These are all issues that do not have easy answers.