When the clock hit zero at Friday night’s football game between the Concordia Stingers and the McGill Redmen, it brought an end to a Shaughnessy Cup game that went very much like the last for head coach Mickey Donovan.

Like last season’s affair, this year’s 46th annual rivalry matchup took place in front of a packed Percival Molson Memorial Stadium, featured high-flying offences, and ended in a blowout victory for Donovan’s side—41-7.

The only difference for Donovan was the colours he wore this time around—Stingers maroon and gold instead of the usual McGill red that he wore for the past three seasons as the Redmen’s defensive coordinator.

If Donovan relished the thought of beating his former team, he didn’t show too much of it.

“It’s special, you know,” said the first-year Stingers head coach. “The main thing is the kids, they needed it. The coaches and I don’t think of ourselves, it’s always about the kids.”

Those “kids,” the Concordia Stingers, are now 2-0 in the Réseau du sport étudiant du Québec, their first win coming by a score of 25-15 against the Bishop’s Gaiters two weeks ago.

The Stingers have already surpassed their total number of victories last season and in only two weeks, have won just as many games as they did in 2012, when they finished with a 2-7 record.

To hit these milestones against their cross-town rivals—by a 34-point margin of victory no less, the largest between these teams since Concordia throttled the Redmen 45-5 in 2005—is just icing on the cake.

“It means a lot,” said Stingers defensive back Kris Robertson, who recorded an interception in the win. “Especially after last year, to beat [McGill] here, on their turf, it’s huge for us and the coaches.

“We wanted this,” he continued. “We were hungry, we fought for it, and that’s what we prepared for.” 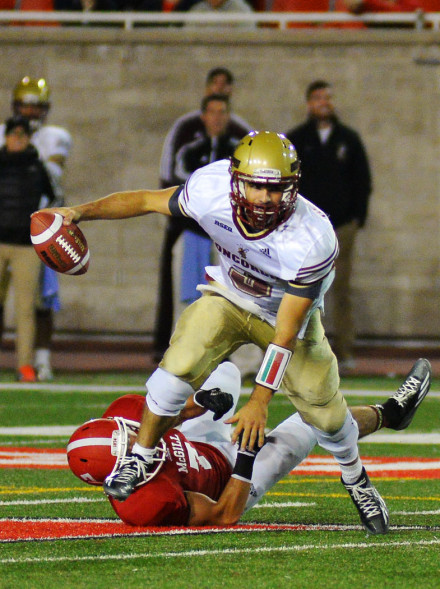 QB François Dessureault threw for 291 yards and scored three touchdowns in a 41-7 drubbing of the McGill Redmen on Friday, Sept. 12. Photo Matt Garies

Unlike their victory over the Gaiters in Week 1, quarterback François Dessureault was the star as the Stingers’ passing offence and featured heavily in the game. Dessureault threw for 291 yards and two touchdown passes to go along with a rushing score.

“It’s a huge boost, obviously,” said Dessureault. “We wanted to win against McGill, not only for us but for the coaches.”

The Stingers took control early, following up a field goal by kicker Keegan Treloar and a short Dessureault touchdown run with a momentum-killing interception from Robertson just over eight minutes into the first quarter.

“We prepared for it,” said Roberston. “I read the quarterback as I did on tape and just made the play.”

The score gave the Stingers a 17-0 lead, one that grew to 19-0 following a safety near the end of the quarter.

McGill scored its lone touchdown of the game in the second quarter—a six-yard pass from Dallon Kuprowski to receiver Louis Brouillette—but found themselves down 23-7 after Concordia scored four points off two safeties by halftime.

Concordia’s defence would force two more safeties by game’s end, while this week’s RSEQ special teams player of week, Treloar, recorded three of his four field goals in the second half.

Dessureault also threw his second touchdown of the day in the fourth quarter, a 34-yard touchdown pass to slotback Daniel Skube.

Rookie running back Gunner Tatum, who thrived in Concordia’s season opening win, was held to just 49 yards on 14 carries, as the Stingers opted for an aerial attack as opposed to the run-first style of play they displayed against Bishop’s University.

“Teams have to respect Gunner and have to respect our run game,” said Dessureault. “With our running game, it helps with play action and read option [plays] and allows me more time to throw the ball to my receivers.”

The Stingers’ bend-but-don’t-break defensive philosophy hardly showed any cracks as they kept the Redmen from their own side of the field until halfway through the second quarter.

The Stingers’ defence ended the night with four McGill safeties, four sacks, a fumble recovery and an interception, allowing only 220 yards of offence.

“With football, if the kids play a hard 60 minutes, the score board will show it,” said Donovan.

With a 2-0 record under their belt, the Stingers will now focus their attention on their next matchup, a Friday-night homecoming game versus the 1-1 Sherbrooke Vert et Or at Concordia Stadium.

The Stingers, unsurprisingly, are up for the challenge.

“This game taught us to keep fighting,” said Donovan. “We bent but didn’t break. That will help us with preparation for upcoming games.”

“We’re ready, we learn something from every week,” said Robertson. “Sherbrooke [is] next, it’s homecoming, [we’ve got to] put on a show. It’s going to be a good game.”