The John Molson School of Business is a school of its own—or at least, it would like you to believe that it is.

If JMSB is a step above, it’s worth wondering whether, over the years, the school and its students have also taken a step away from Concordia.

The Commerce and Administration Student Association, which represents JMSB students, has drawn lines of division between themselves and the Concordia Student Union.

The divisions have never been as clear as they were last year, during the Quebec student strikes, when hundreds of thousands of students across the province were striking against the threat of tuition increases.

In early spring, the CSU held a general assembly that resulted in the calling of a one-week strike. In direct response, CASA held its own assembly and ultimately became one of three associations that voted to boycott the union’s decision to strike.

These strikes conveniently coincided with last year’s CSU elections, and for once, the impact of JMSB became evident in the polls.

According to the same numbers, had it not been for JMSB, A Better Concordia’s then-president Schubert Laforest would have lost his seat to Concordia Could Be’s presidential candidate Melanie Hotchkiss—who beat Laforest in every polling station, save the one located in the MB Building.

Voting aside, nearly every incoming CSU executive has promised to mend the relationship between CASA, JMSB and the CSU.

In a recent letter to The Link, incoming CASA president John-Michael Minon endorsed Carr’s bid for VP Finance on the CSYou slate.

“I am positive that he will be able to bridge the gap between JMSB and the CSU and I am looking forward to working together with the union to make Concordia University a better place for the students,” wrote Minon of Carr. 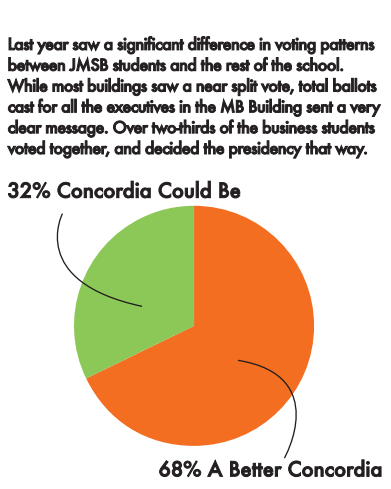 According to Carr, this division is not necessarily confined to student associations—if you ask any business student where they study, the answer is almost unanimous.

Carr is not alone in this thinking. The separation between business students and Concordia University runs deep.

“JMSB has long been perceived as its own school,” explains Pierre Tardivo Martin, current CSU councillor and the sole candidate opposing a member of the CSYou slate, running against Carr for the CSU’s VP Finance position.

“If you ask where [students] study they will say JMSB, not Concordia. I think that’s where they’re a bit different from other faculties,” Tardivo Martin said.

According to Carr, the divide is something that students, associations and the university need to understand, respect and work with.

Changing this mindset might be more complicated than it seems, however.

“If I look at it completely objectively—from funding to things that they have at their disposal—does CASA need the CSU? They don’t,” said Carr.

“They’ve operated without the CSU and they could probably continue to operate without the CSU. That doesn’t mean that there couldn’t be win-win situations that could still be created.”

According to Tardivo Martin, however, the issue could be more complicated still, with this year’s CSU needing to shoulder more of the blame than an intangible difference in “culture.”

“This year there has been a divide between the CSU and every faculty,” said Tardivo Martin. “It’s tough for the CSU, which acts as a sort of umbrella, to keep a unity amongst faculty.”

The CSU represents over 35,000 undergraduate students, across all faculties.

“The CSU has represented everyone’s interest to a large extent, so if that average interest doesn’t coincide with the JMSB general interest there tends to be a lot of backlash,” said Jordan Lindsay, current CSU councillor and last year’s CSU VP Finance.

“I think in my year a lot of JMSB students were pretty pissed off at the CSU for doing all the strike stuff,” said Lindsay. “That didn’t really help things.”

Lindsay’s situation is particular, however. As a business major with a minor in computer programming, he played a significant role in the union that led Concordia through the strikes.

If you attended CASA’s general assembly, held to decide its position on the strike last spring, the message was clear: JMSB wanted no part in it.

Out of 7,500 undergraduate students, 843 participated in the vote. Of those, 123 students agreed with the motion to join the strike movement, 710 opposed, nine abstained and one ballot was spoiled.

Despite voting to boycott the CSU’s strike, some JMSB classes were still blocked by Concordia students protesting tuition hikes—and CASA’s decision not to join.

The experience left an impression on JMSB students that, according to some, is still felt strongly today.

“One of the main reasons that JSMB disassociates and has in the past year and a half dissociated on a whole new level from the rest of Concordia is this red square movement,” said Carr. “[The strike] fed that gap a lot.”

As part of the union that led those strikes, Lindsay admits that one of his union’s faults was a failure to communicate with everyone across the university about the strike.

“I think the lack of communication at that time was the most contentious issue, and has left a really sour taste in the mouth of the JMSB student,” said Lindsay. “It polarized the school as it polarized the city in a very dramatic way. I guess that’s a repercussion that we’re going to feel for a couple years.”

However, while Tardivo Martin feels that the animosity created between JMSB and the CSU during the student strikes is nothing to scoff at, lingering resentment isn’t something he’s worried about this year.

“I think that one year is long enough for the majority of students to move on and forget about the divide that happened during the strike,” said Tardivo Martin.

“I think that one year later I highly doubt that there’s a grudge regarding the strike. I don’t think that people are going to vote tomorrow based on who may or may not have supported a strike at a certain time.”