The only thing Botat could say was “Sorry.”

Botat apologized because he wouldn’t be able to play the rest of the season, due to the injuries he sustained in a car accident on Thanksgiving weekend last October after taking a rideshare back to Montreal from Ottawa.

After almost a year on the sidelines, the Stingers defensive back will return to the team for the upcoming season this fall.

On Oct. 8 2016, Botat was in Ottawa visiting his girlfriend, Natasha Bridgman-Ibrahim. On his way back, he booked a ride-sharing service, where he met Katy Torres.
The accident took Torres’ life. Before blacking out, Botat remembers hearing what he described as “a cry for help.”

“The last thing I heard was [Torres] saying ‘Oh shit’,” he recalled.

After the accident Botat called his mother, Leocadie. She was confused at first, she said he never usually calls her. But Leocadie heard the commotion after her son had told her that he’d been in an accident.

“I started crying because he’s not used to that,” she said. “[At first] I thought he had hit somebody.”

When Botat’s mother heard about Torres’ passing, she felt hurt. It wasn’t so much about her passing, she said, but Torres’ parents having to deal with the situation. “I put myself in their shoes,” said Leocadie

Botat sustained a fractured left ankle and a sprain on his right knee after being cramped under the car seat. He would be limited to a wheelchair and boot casts strapped onto each leg after.

His first season with the Stingers was over.

“Fresh off the accident was bad,” said Botat. “It was probably the worst I have ever been mentally, physically and emotionally.”

For the first three months he remembers crying every single day, but says he feels blessed. “I was crying of joy to thank God that I was still alive,” he said.

Trapped in the confinements of his injuries, Botat’s road to recovery left him frustrated. The simplest tasks became an obstacle. Even walking up the stairs was painful, he said.

“It made everything difficult,” said Botat. Before he got his boot casts, he had to perch on a stool to keep his legs out of the shower.

Burdened by the memory of the accident and left struggling to cope with his physical limitations, the Stingers rookie still feels discomforted, both physically and mentally.

“Thinking about it now, it’s scarier than when it first happened,” said Botat. “[When I] reenvision myself in the same situation, I start feeling [the car’s parts] on me.”

Unable to train, let alone stand on his own two feet, Botat was longing to be back on the field with his teammates.

It wasn’t until Botat, who is enrolled in the religion program at Concordia, was studying at Concordia’s PERFORM Centre at Loyola Campus that it truly hit him. Looking outside, he glanced towards the Stinger Dome where he noticed fellow teammate Jeffery Ouellett walking out. 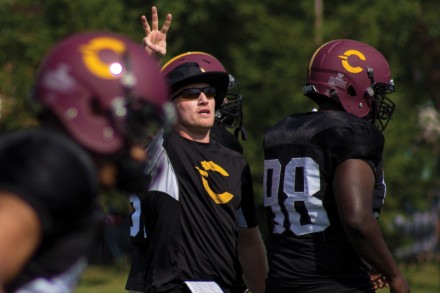 Concordia Stingers football Assistant Coah Pat Donovan was the first to see Botat in the hospital after the accident. Photo Brian Lapuz

Seeing his teammates walking in and out of training sessions, Botat grew restless. But he admitted that he couldn’t push himself more than his body could take. It’s just a time game, he said.

“Sometimes I want to go and take the ladders and take the cones and do a couple drills here and there, but I physically can’t. It sucks, so I just have to proceed and watch people go,” said Botat.

“I guess the part that I missed the most is the process of becoming a good player,” he continued.

Botat pointed to the support he had throughout the weeks following the accident. He said the amount of people he had to talk to when he was feeling low made him feel emotional.

“I would just hit up anybody and they’d listen to me,” he said.

He credits his mother and girlfriend for helping him cope with his injuries and the accident, but he also pointed to another source of inspiration that helped him get through his recovery. 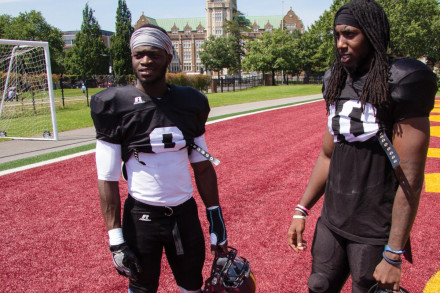 Jersey Henry (right) was one of Botat’s (left) sources of motivation to get back into shape for the upcoming season. Photo Brian Lapuz

Jersey Henry, Stingers defensive back and Botat’s closest friend on the team, became his motivator. Botat said that Henry has been helping him get back on the field since the accident.

“We spoke almost daily after the accident,” said Henry. “I just told him everything was going to be okay and anything he needed I told him don’t hesitate.”

Like everyone who received the news, Henry was shocked to hear his friend and teammate had been in a car accident.

Henry was in Ottawa with a few other teammates at the same time as Botat. Botat was supposed to return to Montreal with his teammates, but a change of plans saw him stick around a little longer. Hearing what happened to his friend, Henry said it felt like a bad dream.

“[Botat] is a very funny person, he likes to joke around. So to see him not be able to walk, to see him in a wheelchair was very hard for me,” said Henry. “I’m not really an emotional person, but I definitely felt a lot of emotions going through my body at the time.”

The two share a close friendship. Predating to their time with the maroon and gold, Henry and Botat have shared the field on several occasions, both as opponents and teammates—Botat played for the St-Laurent Spartans and Henry for the Lasalle Warriors. From there, they went on to represent the Vanier Cheetahs enroute to joining the Stingers.

“I would say our friendship right now is the closest thing to brothers,” said Henry. “We do everything together, we train together.

The team rallied behind Botat. According to Henry, the Stingers used the rest of the season as a tribute to him.

Henry is eager to see Botat back on the field and playing football again. He took the initiative to help Botat get on track with his rehabilitation. Henry said he took on the responsibility of lifting his spirits and motivating him to get back into shape.

Henry never questioned Botat’s ability to recover. According to Henry, Botat “will come and give his all,” to play again.

When asked whether anybody, including Botat himself, doubted that he would ever see the field again, Henry said “Never. Never. Never.”

“As an athlete, that’s never a thought that would cross your mind,” said Henry. “I try to tell him everyday that this is our year—2017 is our year.”

Although Botat wasn’t able to play for the team, he still stuck by them during his rehabilitation. Once he was able to stand again, he said he would go to every practice and run on the sidelines, trying to do as much as he could off the field. But Botat still had a few hiccups along the way.

“[My injuries] stopped me from basically playing my position,” said Botat. “Because I’m a defensive back, I always got to back pedal and that’s where it hurts the most.

Despite his injuries, Botat’s mother is confident in her son’s athleticism and dedication to play again. He can’t be playing if he doesn’t feel like himself, she said. “I think he’s going to be fine.”

With Botat’s recovery on track, It’s likely the Stingers will see him back come the beginning of the season. According to Henry, Botat is “very close” to completing his comeback and doesn’t see him missing any time. He expects Botat ready to be healthy from day one.

“I’m just gonna come in and still be, or try to be as dominant as I was before, if not better,” said Botat.