The Montreal-based rapper dropped a mixtape Nov. 8, creating more space for others to relate to their rap style as a queer Black femme artist.

“Putting out Emotional was my way of really just being honest with myself, and honest with the people around me of how I feel,” they said.

Their music is honest, and they open up about their depression and mental illness in a way that can be tangible in their sound and lyrics.

Blackberryjam likes to listen to emo rap, a sub-genre that surfaced from the Soundcloud underground rap scene, and that inspired the making of their mixtape.

Also a student and practitioner of mental health work, the artist decided to use their knowledge to express themself as blackberryjam. 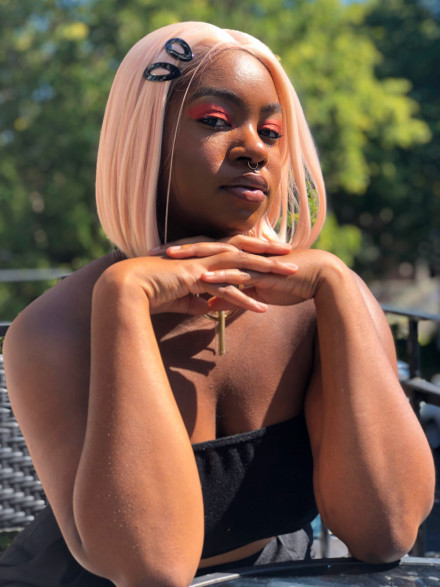 “When people feel really angry about something—when you really dig down to it—it’s just sadness,” they said.

Their ambition is to make safer emo music that still reflects on the struggles of those battling with mental health issues.

Blackberryjam admires the honesty and sound of old-school rappers like Biggie Smalls with his track “Suicidal Thoughts,” which made an impression on their approach to beat-making and overall influence as a rapper.

“That song really makes you feel how sad he feels inside, deep inside,” they said.
They attempt to reproduce that old-school vibe of rap music, imitating the feeling of what it is like in the mind of someone struggling with mental illness and inner struggle.

The fifth track of Emotional, called “psychosis” opens with a thundering rain soundscape.

As the song progresses, the slower synths and beat advance at their own pace. The lyrics and voice soothe with an echo that hypnotizes their listener into an almost disorienting trance.

“I used beats, mainly, that were free,” said blackberryjam. “It’s a non-profit mixtape.”

The second track, called “cap’n bbj,” stirs thought and feeling into lyricism. The track shows their ability to create a space unique to their ability as a writer and a rapper.

Blackberryjam uses self-determination to sift through their feelings and introduce themselves officially onto the rap stage.

Often trying to hide the debilitating thoughts and effects of depression, blackberryjam used rapping to heal and shuffle through those negative thoughts and emotions.

“It was healing to be able to make something out of my pain,” they said.

“When I first put it out, I was actually terrified because people are going to know [that] this is how I feel.”

“Someone told me once that the most advanced way of managing trauma is to make something beautiful out of it.” — blackberryjam

“Especially being a Black person, I often try to look OK,” they said. “You don’t want people to know that you feel like shit every day.”

Not only does blackberryjam want people to enjoy their music, they want to create something beautiful out of their trauma.

“I am still learning how to manage,” they said. “Someone told me once that the most advanced way of managing trauma is to make something beautiful out of it.”

From the image design, the songs, and the beats, blackberryjam came up with everything for Emotional.

They encountered rapper Backxwash at a party; that meeting between artists led to a mutual admiration.

Backxwash, who dropped her full-length album Deviancy this year with great success, knows that blackberryjam can make some noise. Her admiration for blackberryjam’s work originates from what she terms a new era for rap music.

“It’s very important because, over the years, hip hop has gone into a very introspective era,” said Backxwash about the new sound and lyricism exhibited by blackberryjam.

“I had this friend of mine,” said blackberryjam about another rapper they knew. “He was playing around with rapping, and he sent me a video of himself rapping a freestyle that he had done. It was just about how big his dick was.”

Blackberryjam knew that they could do better, so they began rapping for the first time.

“[Rapping] was literally just a response to his stupid writing,” they said. “It was something I thought I could never do.”

“I didn’t expect any of this.”