That is the slogan used by Antiracist Football Montreal, a self-run non-profit organization that strives to use sports as a means to connect individuals who are marginalized by capitalistic systems.

“We come together basically to play soccer,” said coordinator Anna Pringle, “to advance anti-racist struggles in the city, and to use sport as a place to talk about politics, talk about change, and also to create spaces of change.”

Many who play with the club take part in leftist activist groups that fight racism, the far-right, sexism, and other forms of discrimination. Organizers with the club said they felt organized sports, and soccer in particular, had become inaccessible, with barriers to entry too high to clear for many people. They wanted to make soccer as accessible as possible to all.

“We’re a group of people who basically believe that sports and politics should go hand-in-hand,” said Nizar Koubaa, one of the group’s current organizers.

Inspired by the supporters of Football Club St. Pauli, a German soccer team whose fans are known for their leftist social activism, the group wants to be able to use soccer to fully advance their politics. The Hamburg team officially bans all right-wing and nationalistic displays in their stadium. Fans of the club began to involve themselves in leftist activism as a response to fans of larger clubs like HSV Hamburg, FCSP’s principal rival. Win or lose, FCSP fans hit the streets to protest against homophobia, transphobia, racism, sexism, and fascism after every game. 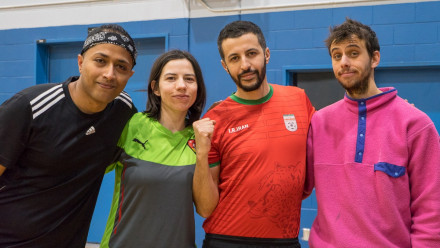 “With a rotating host of organizers, like A.J Jarban, Anna Pringle, Nizar Koubaa, and Matthieu Pelletier (from left), Antiracist Soccer Montreal hopes to create a space where soccer is accessible to all.” Photo Elisa Barbier

Another important factor of their activism is to be a team for the people, instead of being a big club driven by its corporate interests. Existing in Hamburg’s working-class area, St. Pauli hopes to be a club accessible to all. Antiracist Football Montreal hopes to do the same.

“Especially as recently, there’s been a big shift towards a lot of business in the soccer stadiums,” said Pringle. “People have been trying to keep it as a more working-class game across the world so it brings out a lot of those tensions.”

“Many of us are big soccer fans,” said Koubaa. “Which means that we watch as well, and belong to a group of fans who are politicized, also known as ‘Ultras,’ and we are inspired by certain movements around the world that believe that football should be accessible to everyone.”

The Ultras are a group of die-hard soccer fans named for for their unwavering dedication to the teams that they support. These groups are often radical and politically involved. For example, the Ultras in Egypt were a major political force, strongly opposing Egyptian dictatorship of Hosni Mubarak.

Fans of Egyptian rival soccer clubs Al Ahly and Zamalek would typically clash whether their teams were playing or not. But during the Egyptian Revolution of 2011, the two groups banded together and took to the streets to help topple an oppressive government.

“I’ve heard of what they did in Egypt, for example, during the Arab Spring and it’s very impressive,” said A.J. Jarban, another one of Antiracist Football Montreal’s organizers. “How they were organized and how they had a huge impact on the demonstrations, and I think that’s a good example for other groups to follow.

Jarban, a Concordia student completing a master’s in political science, came to Canada from Yemen in 2013 as a refugee. He says the opportunity to combine sports and politics to push for real change is what keeps him around for so long.

“It’s taking sports further from being apolitical to being a political space,” he said. “Talking about inclusivity, and not just as a term or a [public relations] thing that people usually do, but actually meaning it.”

“Everyone is implicated in different ways, in their communities and with different activist groups,”
—Anna Pringle.

Inspired by other movements around the world, Antiracist Football Montreal wanted to create a space where individuals of any background could participate in the sport and feel welcome, while also taking part in the growing anti-racist and anti-fascist movements in the city.

“You can see fascist groups and racist sentiments being displayed in football games, especially in Europe,” said Jarban. “So, there was a need to counter that as well, so these spaces came out.”

During the winter, the group meets once a week on Sundays at École Lucien-Pagé in Villeray. Averaging about 15 players per week, according to Jarban, they play a friendly game from 6 p.m. to 9 p.m. While the group encourages each player to chip in $5 for the session, they also recognize that some may not have the means to do so, allowing anyone to join in.

They also do their best to have informal conversations about politics, but it’s hard because of the limited amount of time they have to play, said Jarban.

“We do that more often in the summer when we do the big tournament,” he said. “Then, we have a barbecue and invite speakers and so on.”

The group hopes to soon become a club and find ways to secure more funding. They will remain a non-profit, but their hope is to explore as many fundraising options as possible that would allow them to gain access to a permanent space and to be able to expand beyond soccer and into basketball, running, and different activities with kids.

One plan is to continue financing the group through the donations collected at their weekly winter games while also applying for city grants, said Pringle. They will also look for partnerships with entities that have similar political goals as theirs and who will be able to help them finance their activities.

“I would like to see more organization, less need to worry about financial resources,” said Jarban. “So, if we manage to push this further to becoming a club, I think it would be ideal to have space for our own where we not only play soccer but we do different events and workshops and conversations.”

But for now, the group is happy to meet up and to play in the spirit of social change. When possible, they direct their members towards radical activism in the city and work within their means to support them.

“Everyone is implicated in different ways, in their communities and with different activist groups,” said Pringle. “In general, we try to share stuff that we want our membership to go to, we try to partner with different groups especially for the tournament to give visibility to their work and to support their work.”

During their 2016 summer tournament, the group teamed up with organizations like Solidarity Across Borders, a support group for non-status people in the city, to help their members get involved with SAB’s anti-deportation campaign.

Last year, one of the teams that came to compete at the tournament was comprised of a large group of migrant Guatemalan workers. They recently had a major confrontation with their employer and were being helped by the Temporary Foreign Workers Association. The workers were able to tell their story to everyone present at the tournament and raise awareness for their cause.

“There are tons of ways to get involved with anti-racist work,” said Pringle.“To support migrant workers, to support folks from various communities.”

Most members in the group are involved, to some extent, with other leftist activist groups. Jarban, for example, works with the Canadian Council for Refugees. As of now, Antiracist Football Montreal hasn’t sent a contingent to a protest under their own banner. That is, however, not out of the question.

“If there is something related to, for example, sports, I think we’d want to have our own banner and our group being there,” said Jarban.

But for now, they’ll continue to meet up, play soccer, and work towards becoming an official club, open to all who uphold their values of inclusion. Like the fans of St. Pauli, the group hopes to make soccer accessible again.