The rain came down as around 100 protesters gathered outside Bordeaux prison for a noise demonstration against prisons and police on June 13.

The purpose of the demonstration was to make as much noise as possible in order for the prisoners to hear them. Demonstrators were equipped with pots, pans, trumpets, vuvuzelas, and chanted “solidarity” as loud as they could.

Following speeches from organizers, demonstrators congregated around the prison’s border fence. They deployed fireworks and firecrackers to get the prisoners’ attention.

Shortly after, prisoners acknowledged the noises from demonstrators. They joined in the “solidarity” chant. 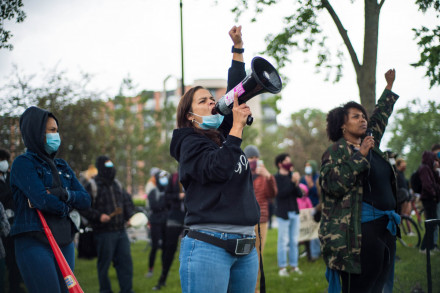 Around 100 protesters gathered to fight for the rights of those locked inside Bordeaux prison. Photo Caroline Marsh

The Anti-Carceral Group, which organized the event, wanted to call attention to systemic racism in Montreal. In the fall of 2019, a report showed that Black and Indigenous Montrealers are four times more likely to be stopped by the police than white people. Between 2014 and 2018 police killed five Black men in Montreal: Alain Magloire, Rene Gallant, Bony Jean-Pierre, Pierre Coriolan, and Nicholas Gibbs.

“When the police kill a Black person, that’s not a mistake. That’s the system working as designed,” said Amanda Thompson, a co-organizer of the protest.

The group also pointed out that racist policing is the reason for the disproportionate incarceration of Black people. Even though Black people make up 3.5 per cent of the province, they represent 7.5 per cent of federal prisoners.

Bordeaux prison has been especially hit hard by COVID-19. For the past month, prisoners inside have been under a 24/7 lockdown. This means they’re unable to leave their cells, talk to their families, or talk to their lawyers.

“People have been telling them from the start—‘you need to let people go, you can’t keep people inside during a pandemic.’ And the only change they’ve made is to put everyone into solitary confinement,” said Virginia Lee, one of the demonstration’s speakers. 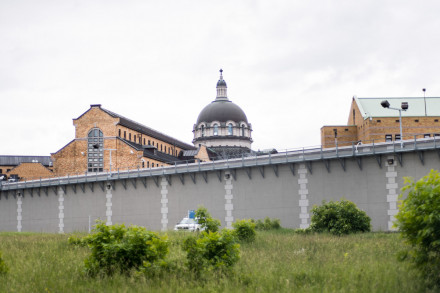 Bordeaux prison has been criticized for disregarding their inmates’ safety during the COVID-19 pandemic. Photo Caroline Marsh

Bordeaux faced controversy in May, after the COVID-19 related death of a 72-year-old prisoner who had been awaiting a trial for a drug trafficking charge. Lee blamed his death on the inaction of Bordeaux. She claimed all they did was move him into isolation without providing him with any further assistance.

Kiyha Schrouder, co-organizer of the event, spoke on the barbarism of Black and Brown people dying every day due to both COVID-19 and racism.

As a Black woman, she expressed joy to see so many white faces in the crowd, and told them to use their privilege to affect change.

“They listen to you guys,” Schrouder said. “When you guys cry, they listen. They don’t care when I speak.”

“When the police kill a black person, that’s not a mistake. That’s the system working as designed.” —Amanda Thompson

For her, prison abolition is a necessity. The abolishment of the prison system doesn’t mean there will be no structure for dangerous criminals or for criminals with repeat offences, she said, but there will be measures in place to ensure these criminals will be able to integrate back into their communities. This could mean these people are equipped with resources and equal opportunities in order to prevent them from repeat offending.

“There are so many Black and Brown people in these prisons right now because the laws are set up against them,” she said.

“It starts from when you’re a little baby in school. Systemic racism is something that they use to break us down everyday to make us afraid to talk,” she continued. “It makes Black and Brown people scared to even support each other. Systemic racism is real. And we’re here today to break down the system. Take it, squash it, and rebuild it.”

Lee noted the connection between prisons and the history of slavery and colonialism in Canada. She pointed out how, in Western Canada, the first wardens of prisons were originally soldiers who were sent out to put down Indigenous uprisings. She continued to mention that, in Eastern Canada, some of the first prisoners who were brought in were enslaved Black people. 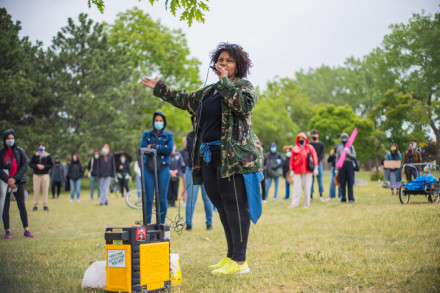 Kiyha Schrouder speaks to the crowd of demonstrators, encouraging white protesters to use their privilege for good. Photo Caroline Marsh

A woman who introduced herself solely as Alexis played an audio recording from her cousin. He’s been in solitary confinement since Feb. 28 at Donnacona prison, 40 km outside of Quebec City. In the recording, her cousin revealed he is confined to his cell for 23 hours and 30 minutes each day. He said there’s no hand sanitizer or cleaning products available to the inmates. Cotton face masks were only given to the prisoners in late April. They have not been given resources to clean these masks.

The father of Alexis’ children is currently detained at Bordeaux. He told her the guards at Bordeaux have not been communicating with the prisoners about the COVID-19 situation. Most of what they’ve learned has been from sources from the outside. Once the prisoners learned of the virus, they became frightened that it would enter the prison and rapidly spread.

At Bordeaux prisoners are split up into eight different sectors: A, B, C, D, D2, E, F, and G. According to Alexis, a prisoner brought the virus in through the G-range section of the prison—where it rapidly spread across 90 guards.

According to her children’s father, the guards didn’t take the spread of the virus seriously, and continued not to wear any Personal Protective Equipment. The guards served food across the prisons’ different sectors, and this led to a further spread across the prison. 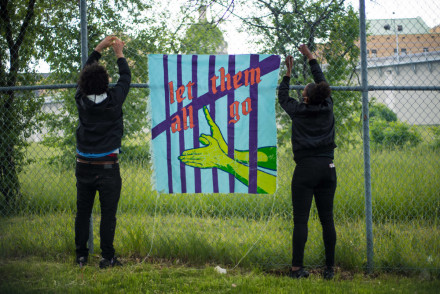 Alexis’ children’s father, who was in the B-range section, was never tested. Guards asked the prisoners in the B-range if they felt any symptoms—but they didn’t provide any further medical examination.

‘They didn’t even give a thermometer to the forehead,” she said. “Unless you are on your deathbed, you won’t get any medical attention.”

Three people in the B-range section of the prison have now tested positive for COVID-19. For her, this shows there isn’t enough attention given to prisoners during the pandemic. What makes the situation more dire, she says, is that prison infirmaries are usually hard to access during regular times—during the pandemic, they’re even more inaccessible.

After the death of the 72-year-old man, Alexis recounted, her and others went to Bordeaux to protest outside of the prison fences. During the protest, police officers supervised the crowd from a distance. At the end of the protest, these police officers turned on their headlights, began playing “Locked Up” by Akon on their loudspeakers, and laughed at the protesters.

“It was a way to taunt us, to taunt the prisoners. It was very childish. It was hurtful to experience,” she said. “It shows that they don’t take us seriously.”