‘An Inventory of Moons’ Presents Nature Through Sound

The performance spanned 130 years and 130 notes.

Sarah Nance’s exhibition an inventory of moons had its soft opening on Sept. 7 at the Concordia FOFA Gallery. With beaded nets hanging from walls across the floor, the exhibition left space for people to walk through and experience the work. Those in attendance were treated with a one-time, live performance by Nance and artist Burke Jam to accompany the exhibit.

“This performance stemmed from the fact that [Nance] couldn’t be at the vernissage,” said FOFA exhibition coordinator Catherine Deschamps-Montpetit. “I thought it was such a shame that she couldn’t attend her own opening that I suggested that we have a soft opening.”

That suggestion turned into a unique and powerful performance that kept its audience in awe.

Nance performed an operatic aria based on the data on the level of the tides in the bay of Marseilles in France. She turned the data from what she described as the oldest continuous tidal gauge (1884) into a piece that hauntingly demonstrated the continuing damages and effects of climate change. 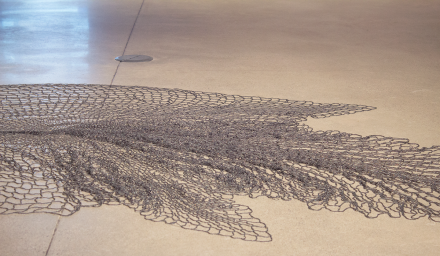 The beaded nets took on average one year to make. Photo Dustin Kagan-Fleming

For each year and rise in the height of the tides, Nance assigned a note. With each instance of the tides’ height rising, so did the pitch of the notes.

“I studied opera since undergrad and it’s such a dramatic medium,” said Nance. “So that was the reason for choosing an operatic aria. It’s so full of human emotion and human drama.”

Her slow and low performance built in intensity and pitch so that by the end it pierced and filled the gallery. The aria was equal parts beautiful and haunting, with Nance’s voice shining through but also managing to convey the sadness and warning inherent in the message of her work.

Lasting just a couple of minutes, the vocal aspect of the performance was a force of nature (almost literally), and particularly powerful in that it was only going to happen once before Nance returned to Texas, where she teaches.

Nance was followed by Jam, whose piece will play throughout the exhibition’s run.

Using a modular synthesizer, he delivered his own nature-based creation. Using the data from the mapping of seismic impacts created by the Apollo 15, Burke put together a sound-based piece that reverberated across the entire room using a process called sonification.

“I studied opera since undergrad and it’s such a dramatic medium. So that was the reason for choosing an operatic aria. It’s so full of human emotion and human drama.” — Sarah Nance

“It’s a loose term for taking any data set and turning it into sonic information. It’s used in the scientific community a lot […] to understand large amounts of data,” said Jam.

He added a live element to the piece by using his tools to create reverberating echoes with the simple metal bannister in the gallery, adding an extra echoing layer to the performance.

The relationship with nature is something that’s deeply important to the work of both Nance and Jam.

Jam is very focused on the idea of humans having an innate connection with nature and using technology as a lens for understanding, interacting or experiencing it. His process here takes the natural world and its phenomenon to communicate it through his artistry and the technology he uses to produce it.

He works to give people firsthand experience that they might not otherwise have and interact with the physicality of the natural world.

Nance and her work have a similar connection with nature. Her idea for the aria originally began as a desire to “sing the tides,” even if she didn’t know what that exactly meant at the time.

“For me, what’s interesting is humans becoming a geologic force. It’s so common to hear humanity or human activity or the built environment contrasted with the natural world, when humans are the most prominent geological force on the planet right now,” said Nance.

For Nance, not only is the exhibition exciting, but where it’s being held is special to her. She spent the last three years teaching at Concordia.

The exhibition was not only filled with her work of hand-crafted, long, beaded nets (taking on average a year to make) and small fossil hung by a pendulum in the centre of the room, but also by her former students.

“It’s a special, particular experience here because the vast majority of people that were here have been my students. When we’ve been in conversation [before], it’s been about their work. So it was interesting to have that experience in reverse [this time],” said Nance.

an inventory of moons will be displayed until Oct. 18.