An Education in Parenting

Strikes, Hikes and Students With Children

Not too far away from the annual ode to public drunkenness that is Montreal’s St. Patrick’s Day parade, a very different kind of procession was going on.

The two events shared one thing in common, however: both had a large contingent of families pushing baby strollers.

While those toting tots were by and large parents concerned for the affordability of an education that is more than a decade away for their young ones, a few in the crowd had a dual concern: while they want their kids to have affordable university options, they themselves are currently students.

“I’m here because I’m a student, and a parent also, and I’m studying education,” said Valerie Boisvert, whose son Edouard munched on nuts while sitting in his stroller, eyeing the numerous dogs running around the park. “I think it’s important to demonstrate, because we need to make sure the next generation has access to higher education.”

While Boisvert’s opinion was the prevalent one at the march, it’s not a black-and-white issue. Boisvert acknowledged that she will be graduating in two years, so the hike won’t directly affect her as much as it will others, as the full $1,625 hike is scheduled to be rolled out incrementally over five years.

Some are not so lucky. 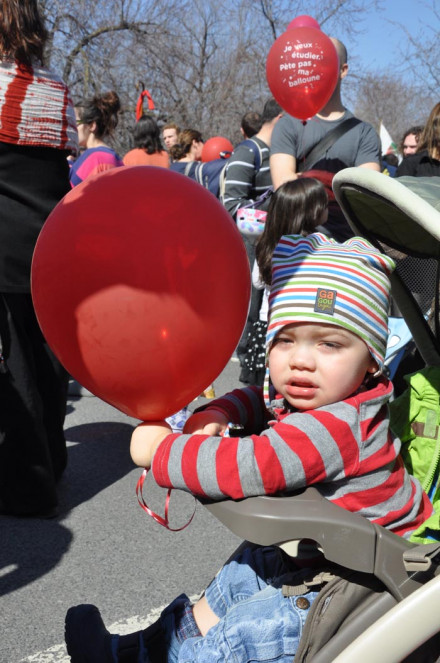 Most student parents are at school part-time, both because of the need to work to support their families, and also because of the taxing effort involved with childcare.

As with all students, any provincial financial aid is decided on a case-by-case basis, though there are certain policies that show the Quebec government recognizes the challenges facing student parents.

These include offering loans and bursaries to single parents, taking into account parenting costs, offering full-time loans to part-time students, and exemptions from repaying a loan during pregnancies or following birth or adoption.

However, as with other forms of financial aid, the government has not yet revealed how the tuition increase money will be allocated for those seeking loans and bursaries.

Higher tuition will make paying for school harder, and missing weeks of class is not an appealing option either. Sumaiya Gungat is the coordinator for the Concordia University Student Parent Centre.

She thinks it would be extremely hard for someone with children to get actively involved in a strike.

“They’re not just taking care of kids, but taking care of the house, working on their studies, and now they have to work on something more,” she said. “So I think it’s challenging, and I think a lot of parents give priority to their family.”

That’s a sentiment reflected by Concordia graduate student Orzu Kamolova. Originally from Tajikistan, the mother of a 3-and-a-half-year-old named Richard is working on a master’s in educational technology, as well as working on an internship with eConcordia—all this while also working part-time.

Though she’s recently separated, she has a good enough relationship with her former partner that she can often rely on him to watch their son, as well as using publically funded daycare.

Even so, she doubted her ability to find the time to take part in any strike activities. (The Link spoke to Kamolova before the Graduate Students’ Association voted for a general strike on March 6). 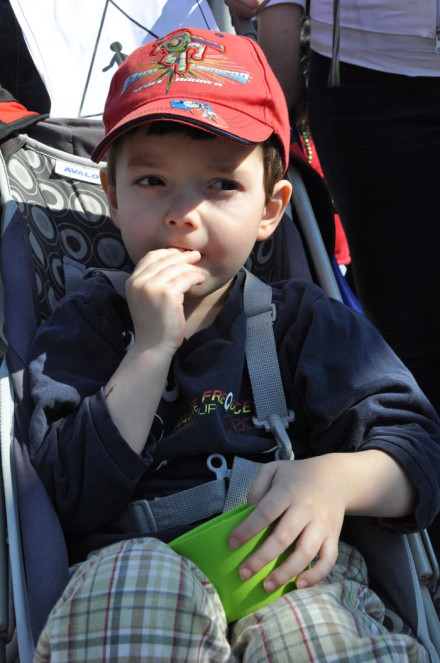 “I’m so tired. I have a child, I have social work, I have community work, studies and an internship. Personally, I cannot go on strike. And most of the student parents, it’s not that they don’t care, it’s that they have so much else going on in their lives that it’s not their first concern.”

It’s hard to tell how many student parents will be affected by tuition hikes. The Concordia Student Parent Centre estimated that around 400 people came through their doors this year.

According to a study from the University of Guelph, published in the Nov. 3 issue of the Canadian Journal of Higher Education, between 11 and 16 per cent of students who enrolled in post-secondary institutions in Canada between 1976 and 2005 had children at the time.

Many are older than the average student. While 90 per cent of post-secondary students were between the ages of 15 and 29, 65 per cent of those with kids were between 30 and 44.
CUSP deals a lot with the problems specific to being a working, single parent who is also in school.

While Gungat will gladly rattle off the lengthy list of services that CUSP offers, which extends from printing services to a parent-oriented version of the Concordia Student Union’s Swap Shop, she noted that there is one key service that she isn’t able to offer: daycare services, the most sought-after service for those who walk into her office.

Gungat will refer parents to Quebec’s famous public daycares, which cost $7.00 a day. The drawback? The wait-time to get in can be as long as two years, though she did add that some parents are eligible to be reimbursed if they enroll their children in private daycare until a spot becomes available. Still, that’s money required upfront.

“A lot of them are part-time, and a lot of them are women,” said Gungat of the people who come to CUSP. “A majority of them are single mothers. I would have to say as a parent, it’s hard to take full-time courses.”

What often makes things harder for those who come to CUSP is that they are new to the country. Kamolova, a former VP Finance for the Concordia Student Parent Association—a club based around some of the people who use CUSP’s services—said she has “never seen Canadian-born student parents coming for help.

“They have their parents or social network. Mostly people come to CUSP to be listened to. They just want to speak out about what’s going on with their lives.”
Two weeks before the strike, Gungat said nobody had come to her to talk about it, or the tuition increases.

“I know that a lot of student parents who come here support the strikes and demonstrations,” she said. “They don’t really come here to complain to me, and I think they know that we’re a service that’s provided by the university, so they’re not going to come here complaining about it. That’s the feeling I’m getting.”

However, Kamolova expressed sympathy for future students, though she noted that she won’t be as affected as some.

“It’s going to affect our morale, our family situation, our social lives, our environment as a whole, if we have to pay another $300 for education, or $240 for daycare, of course that’s going to be challenging, unless the government increases my child support, but they are not going to do that.”

It takes sacrifice to raise a child.

While that can come in many forms, from giving up anything resembling a steady sleep schedule to the huge financial investment for two decades of dependency, it can also come in the form of a strike so that child can have the same opportunities as you.

On Sunday, roughly 10,000 people marched and chanted—or were rolled and gurgled—to make that point.